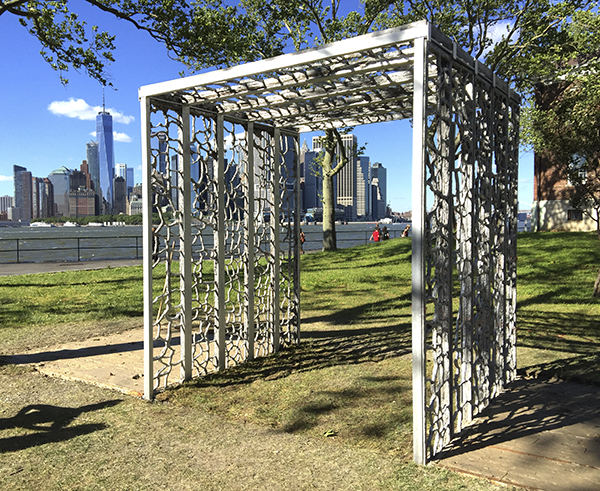 The seventh annual City of Dreams Pavilion 2017 is live on Governors Island! Cast & Place by Team Aesop (Josh Draper from PrePost; Lisa Ramsburg, Powell Draper and Alexandra Cheng from schlaich bergermann partner; Edward M. Segal from Hofstra University; Max Dowd from Grimshaw Architects; Artist Scot W. Thompson; Bruce Lindsay, Sculptor)  opened at the FIGMENT NYC event on June 3, and will remain open on Governors Island, 7 days a week, through Friday, August 25. The pavilion is located on the North side of the island, immediately in front of Building 114, and across from Castle Williams. Here is the exact location. For information on visiting Governors Island, view the island website here.

In the future, waste will become our greatest asset; reuse will create things of value. Cast & Place reimagines waste as a transformative resource for our New York City future. Excavated clay, the material also used in the construction of Governors Island, is spread out to dry and crack. Recycled aluminum collected with Sims Municipal Recycling and the NYC community is cast into the cracked clay. The results are light, strong panels that provide structure and shade, assembled into spaces for performance and play. Rain-soaked reflecting pools of clay reveal the pavilion’s formwork as they dry and crack in the summer heat, inducing meditations on time, materiality, and the resources of our city.

FIGMENT is accepting tax-deductible donations to support the fabrication, installation, and maintenance of the pavilion on Governors Island for the 2017 summer season.

2011 – Burble Bup by The Bittertang Farm

The jury initially reviewed over 100 design proposal submissions and selected five finalists who each had a month to further develop their designs in response to the jury’s comments.

The four additional finalists were as follows:

Runner Up: MARL by knitknot architecture: Maria Esnaola, Gonzalo J. López, Alfonso Simelio (first phase team), Diana Cristóbal, Alicia Hernanz, Alexandre Malagelada, Tania Oramas (second phase team)
MARL celebrates Governors Island as the newest vibrant public space in NYC. Built using only local soil and recyclable earthbags, it will be a model for participatory and zero footprint construction. MARL will be a refuge from NYC summer and a great place to rest and play at the Island. Earthbag walls will provide shade and reflect sun heat, while curving walls will funnel wind through corridors and collective spaces. MARL is a Collectively Owned Public Space, in which engagement is encouraged. Thanks to its heavy walls and design, it will not just be looked at, but rather touched, climbed and stood upon. 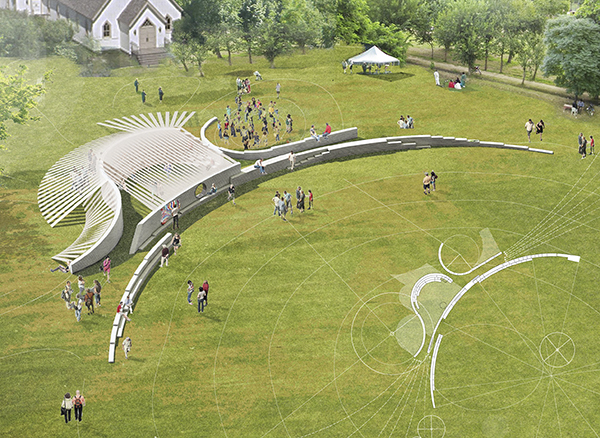 Ventifact by Studio Spontaneity (Kat Chan, Hubert Chang, and Michael Signorile)
Born from construction debris, Ventifact addresses the city’s past and directs a future where the metropolis nurtures personal connections amongst inhabitants. Evocative of wind-sculpted sea caves and cliffs, it creates forms and voids that surprise and delight. Ventifact consists of three nested components: the Cloak, a shield opened to invite procession and unveil the Shell; the Shell, an enclosure for informal gatherings and events; and the Gem, an art installation inspired by the dynamism of nature. Ventifact celebrates conversations and experiences of life on the grassy retreat of Governor’s Island, creating a fleeting opportunity to explore an unexpected space. 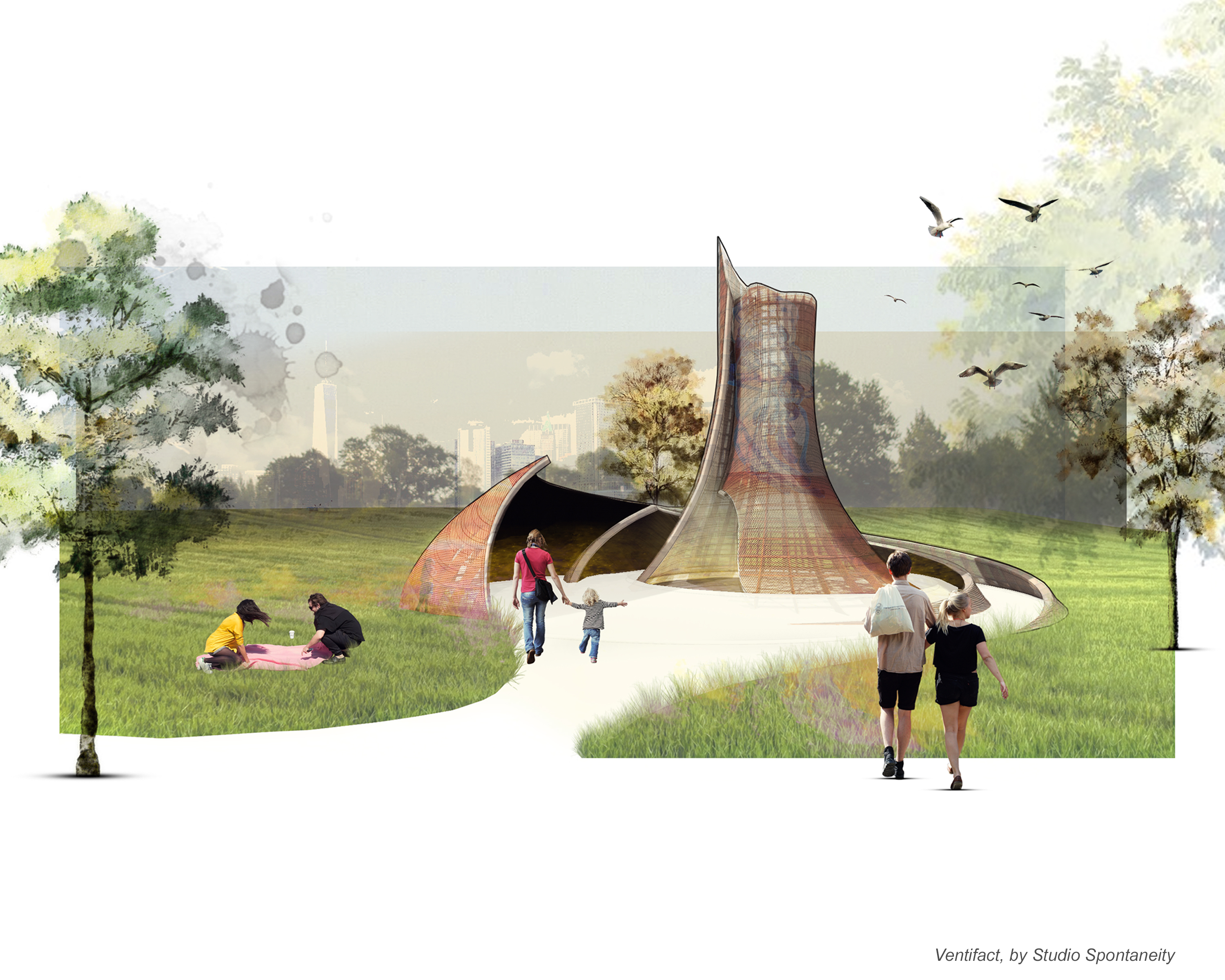 Mille-Feuille by FY/D (Dimitris Venizelos, Grace Yu, Frank Zimmerman)
The constructed city regulates our routines, interactions, and perceptions. Its measured evolution, often directed by a few, establishes a rigid form incapable of meeting the needs of a diverse population. Repurposing the fabric of the City - parallel sheets of debris netting, hung from Manhattan scaffolding, Mille-Feuille imagines an urban framework that encourages communities to sculpt their own environment. Whether a large round is needed for a performance or a tight enclosure for contemplation, space responds to ones needs through touch. A performance piece, Mille-Feuille celebrates the imaginary city as a vessel for discovery, encounter and shared humanity. 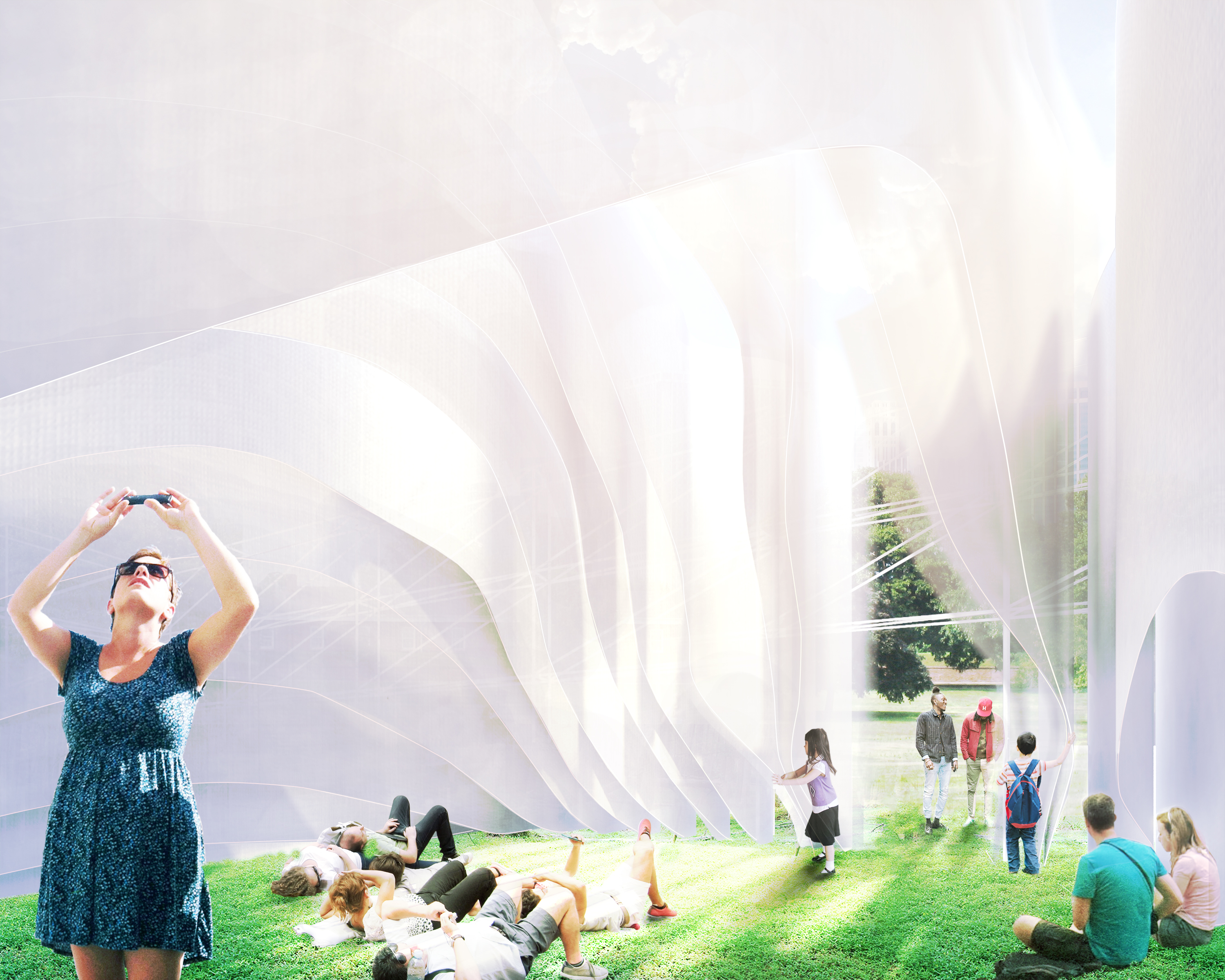 Seed Cone Pavilion by DFA (Laith Sayigh, Judi Shade Monk, Sarah Jazmine Fugate, Dori Raskin, DK Park, Zhimin Zhang, Luke Gehron)
What if we could build a temporary structure that actually dissolved to leave a garden in its absence? The Seed Cone Pavilion is inspired by the cone of the Pitch Pine Tree native to Governor’s Island.  We conceived a reusable, transportable structure that is recharged to restore indigenous plant life to any context in which it is placed.  The Pavilion’s form easily accommodates varied programs and events such as musical performances and educational classes, in addition to providing simple, elegant shelter from sun, wind, and rain.  The pavilion pays homage to the island's history by leaving a planted footprint that grows, expands and blurs over time, contributing to the natural landscape, and supporting local insects and fauna for many seasons beyond Summer 2017. 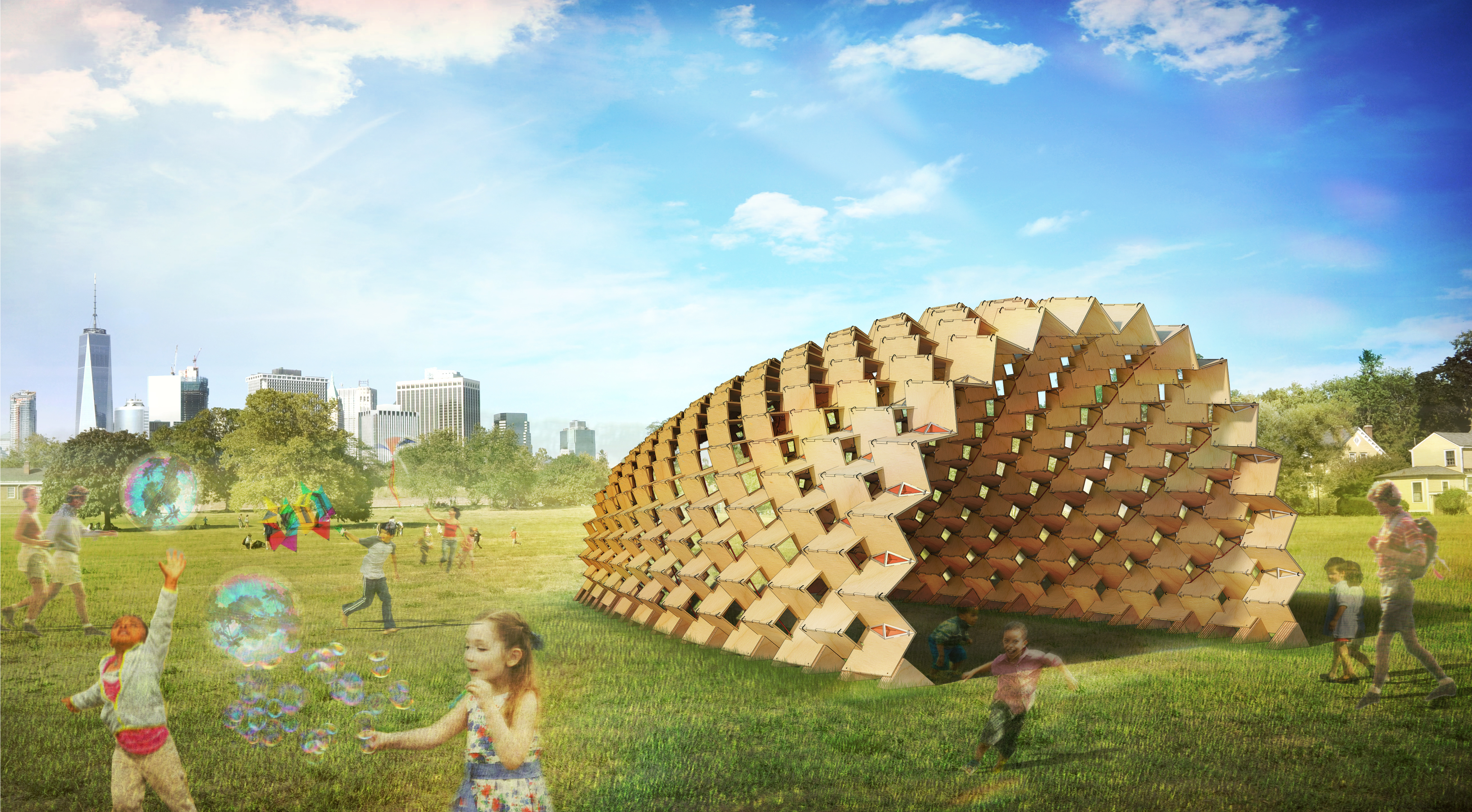