FIGMENT, the Emerging New York Architect Committee (ENYA) of the American Institute of Architects New York Chapter (AIANY), and the Structural Engineers Association of New York (SEAoNY) are pleased to announce that Studio Klimoski Chang Architects’ Head in the Clouds has been assembled on Governors Island, and will be open to the public for the summer 2013 season June 8 through September 22.

About Head in the Clouds

Designers Jason Klimoski, AIA, and Lesley Chang of Studio Klimoski Chang Architects kept sustainability in mind when designing Head in the Clouds. The structure’s armature is made from 1.5″ aluminum tubes that use less material and are easier to transport than more traditional materials such as wood. All the materials are recyclable in an effort to limit the carbon footprint. Klimoski and Chang worked with schools and local organizations, including New York Road Runners and NYCRUNS, to collect the 53,780 milk jugs and water bottles needed to create Head in the Clouds. The jugs were used to create 120 “pillows” that give the cloud its bumpy, organic shape. The bottles, accentuated with organic food coloring and water, create the interior’s blue hue.

Head in the Clouds offers visitors the chance to walk into the clouds, experiencing them from the inside out. Clouds are collections of water and movement that seem to form animals, people, and cities by dreamers gazing at the sky. With their ‘heads in the clouds’ sky gazers visualize fantastical shapes, ideas, and spaces. The City of Dreams Pavilion is a place dedicated to dreaming, and this year’s winning project exemplifies this ideal. This project creates a venue where visitors can lose themselves in both the cloud-like structure, as well as the clouds in the sky around them. 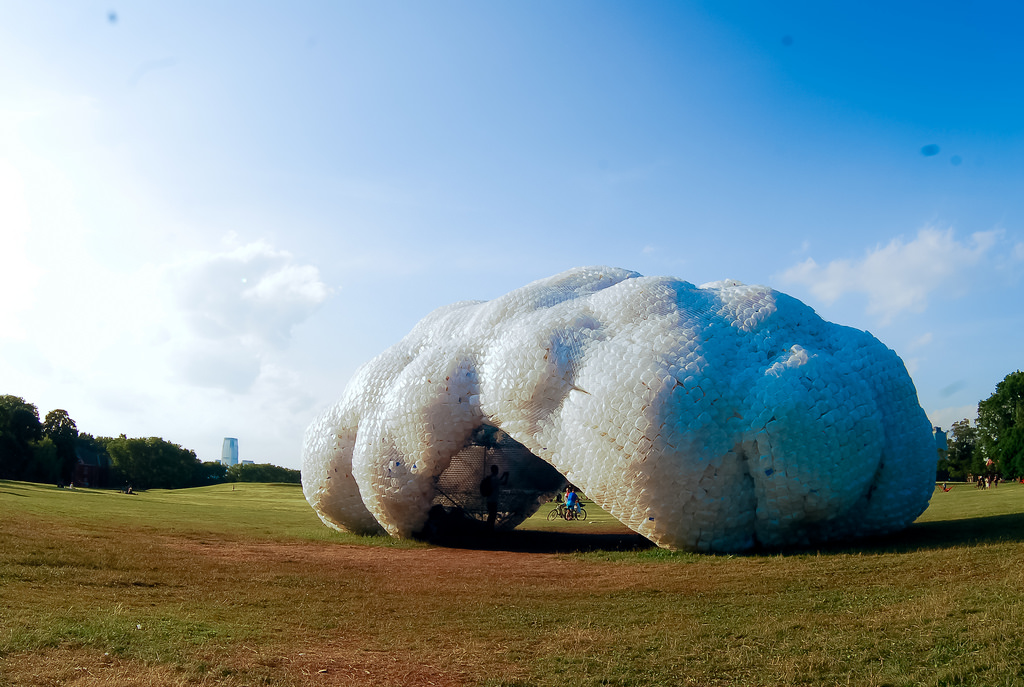 FIGMENT is accepting donations to support the maintenance of Head in the Clouds on Governors Island by following the link to donate to the pavilion here. Please make a contribution, and help us maintain this awesome project throughout the summer! Thank you in advance for your donation! 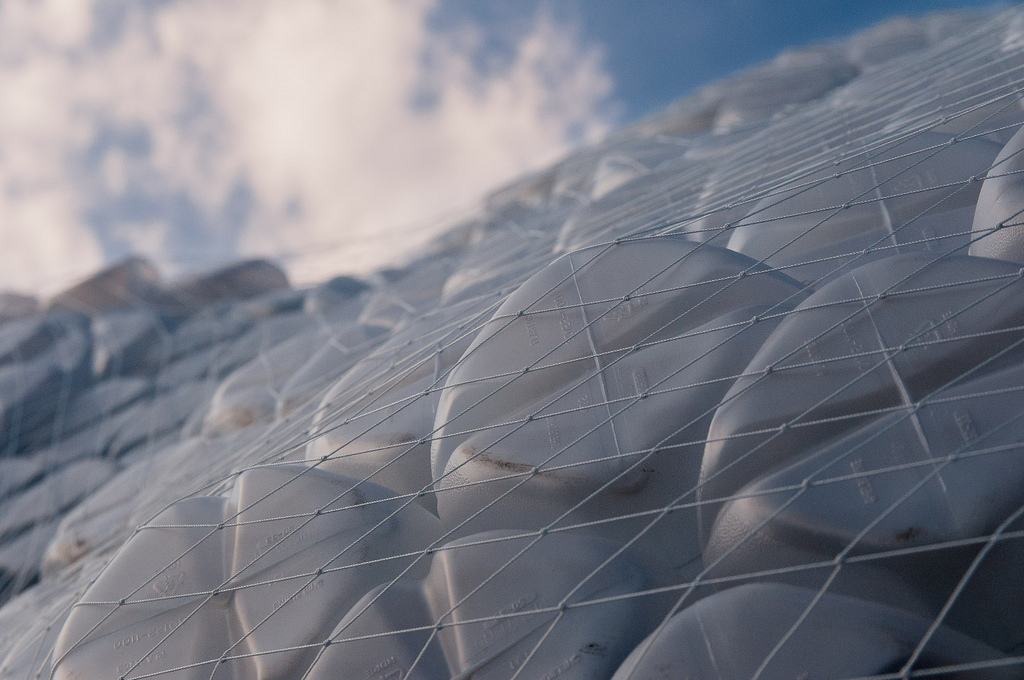 FIGMENT teamed with the Emerging New York Architects Committee (ENYA) of the American Institute of Architects New York Chapter (AIANY) and the Structural Engineers Association of New York (SEAoNY) to host a competition to design and construct an architectural pavilion on Governors Island, the City of Dreams Pavilion. The 2012-2013 pavilion will be the third City of Dreams Pavilion. The result of the inaugural first competition, in 2010, was the Living Pavilion, designed by Ann Ha, Assoc. AIA, and Behrang Behin, Assoc. AIA. The second competition, in 2011, led to Burble Bup by Bittertang. These first two pavilions were created through a six-month process that included a call for proposals, a design competition, and a rapid fabrication and installation process. This year’s pavilion extended this process, holding the design competition in 2012 to create a pavilion on Governors Island in 2013. 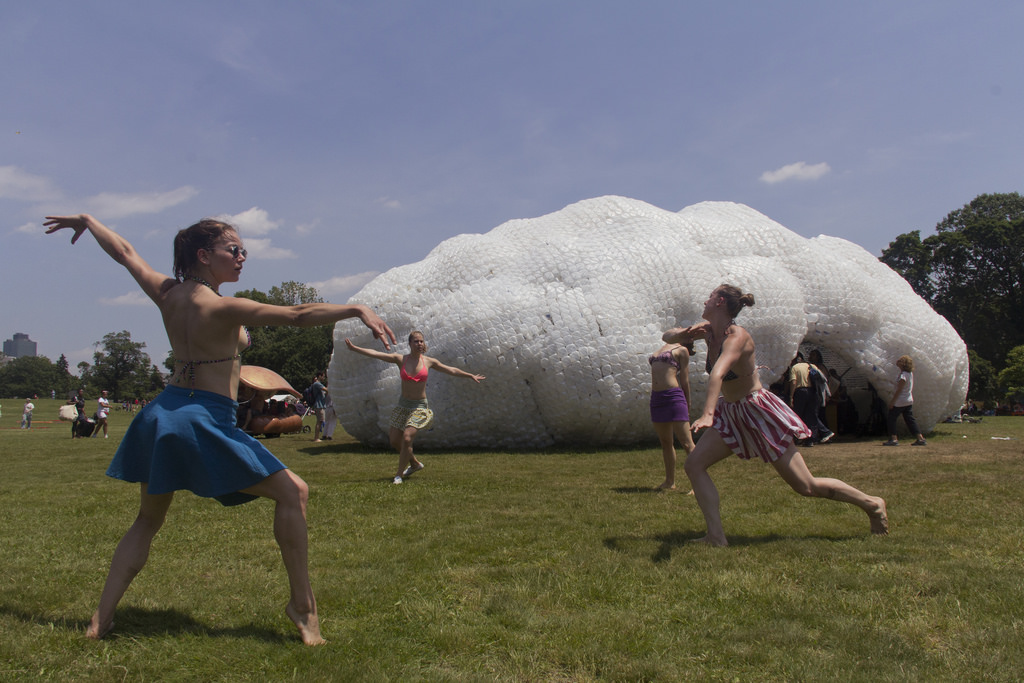 FIGMENT is a free participatory arts event held in multiple cities and attracting tens of thousands of participants each year. FIGMENT celebrates an abundance of creativity and passion, challenging artists and our communities to find new ways to create, share, think, and dream. Become a part of events in multiple cities in the US and Australia, and interactive exhibits on NYC’s Governors Island throughout the summer season. For more information on participating cities, visit figmentproject.org.

FIGMENT is a 501(c)(3) not-for-profit organization entirely funded by grants and individual donations. FIGMENT accepts no corporate sponsorship of any kind. FIGMENT is supported by public funds from the National Endowment of the Arts and the New York City Department of Cultural Affairs, in partnership with the City Council, as well as by the Fund for Creative Communities, supported by the New York State Council on the Arts and administered by the Lower Manhattan Cultural Council. FIGMENT Boston is produced with support from the Rose Kennedy Greenway Conservancy, the designated stewards of the Rose Kennedy Greenway and site of FIGMENT Boston. FIGMENT Jackson is produced with support from the Greater Jackson Arts Council.

It is the goal of the Emerging New York Architects Committee to encourage membership, participation, and leadership in AIA New York among intern architects, young architects (licensed 10 years or less), and emerging professionals in the fields of design and construction. The committee engages NYC’s diverse emerging design professionals through lectures, design competitions, and networking opportunities, with a focus on Professional Development, Design Excellence, and Public Outreach.

The association sponsors workshops, panel discussions, lectures and seminars with the aim of addressing topics of interest and concern to structural engineers. Our membership, which is over 500 members, includes individuals from most major structural engineering design firms in New York State.
SEAoNY also reaches out to other professionals, outside the engineering community, who work in related fields with common interests. Currently, 10% of our membership is affiliate members who come from a variety of disciplines such as geotechnical, civil, construction management and architecture.

The purpose of SEAoNY is to advance the art of structural engineering in New York by improving the flow of ideas and building the community of colleagues.