FIGMENT, the Emerging New York Architect Committee (ENYA) of the American Institute of Architects New York Chapter (AIANY), and the Structural Engineers Association of New York (SEAoNY) selected CDR Studio's Governor's Cup as the winner of the fourth annual City of Dreams Pavilion Competition. Governor's Cup was assembled on Governors Island last spring, and was open to the public for the summer 2014 season.

The Governor's Cup Pavilion hovered among a cluster of trees on the Parade Ground. Inspired by tape-lace crochet, used plastic cups, saved from discard from throughout the city, are bound by zip-ties into a densely-knit serpentine structure. Undulating between the tree branches, the canopy was suspended by strapping and turn-buckled cabling. The trees were unscathed. A lacy infill of cups between the tape structure and branches created an airborne topography and shadow play. The configuration formed an outdoor room, shimmering in the sun and echoing with breeze-driven sound. 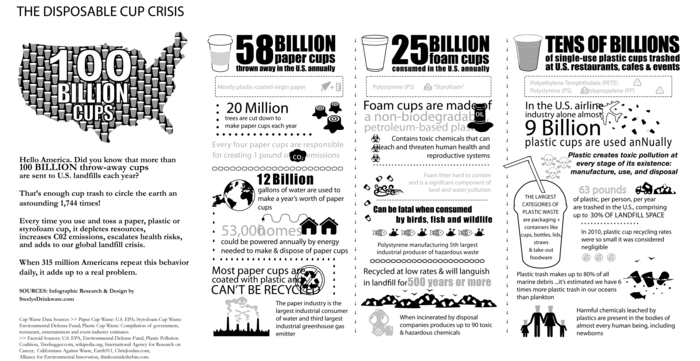 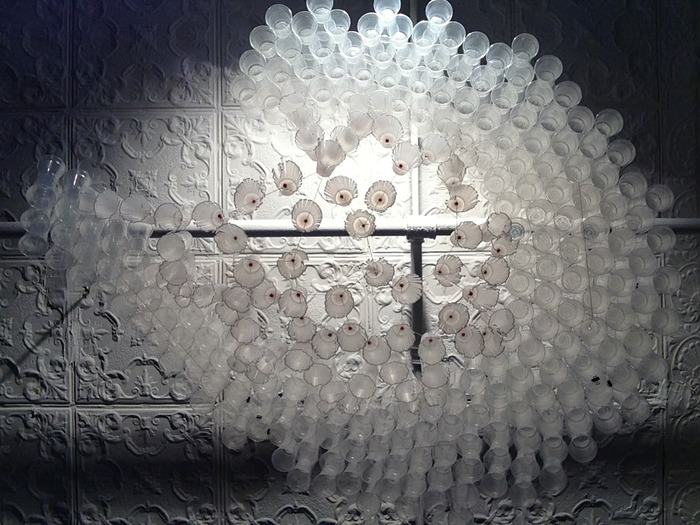 Thanks to the 100+ volunteers who helped collect materials, assemble, and install Governors Cup! 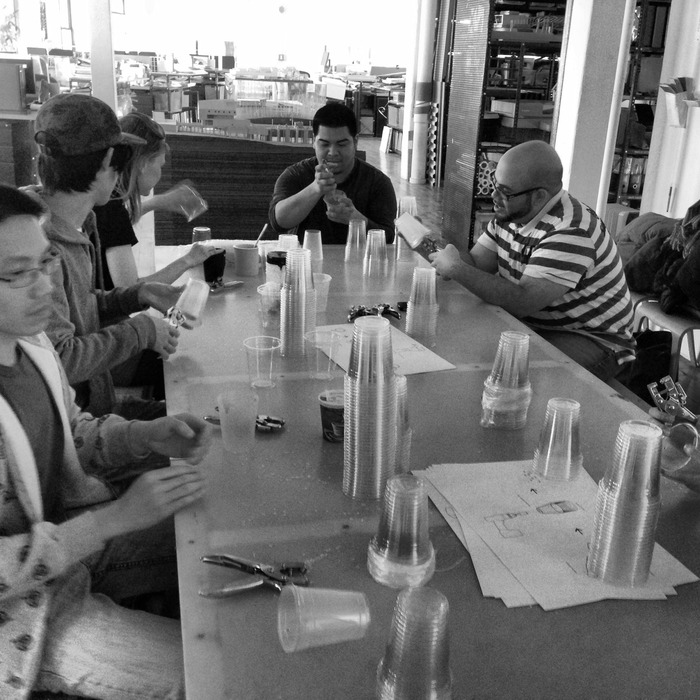 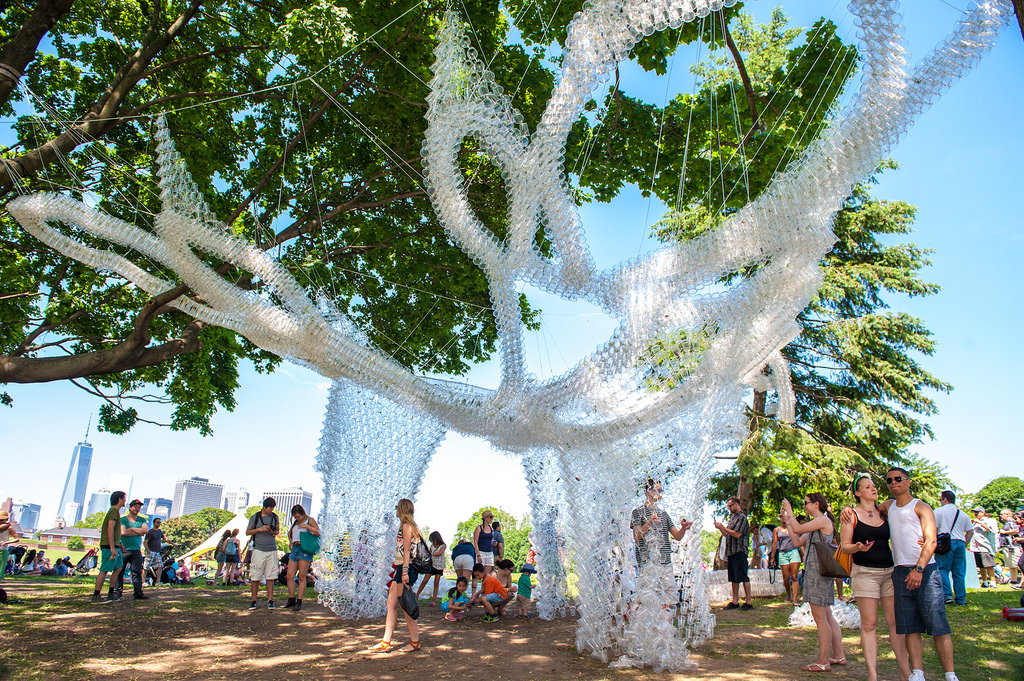 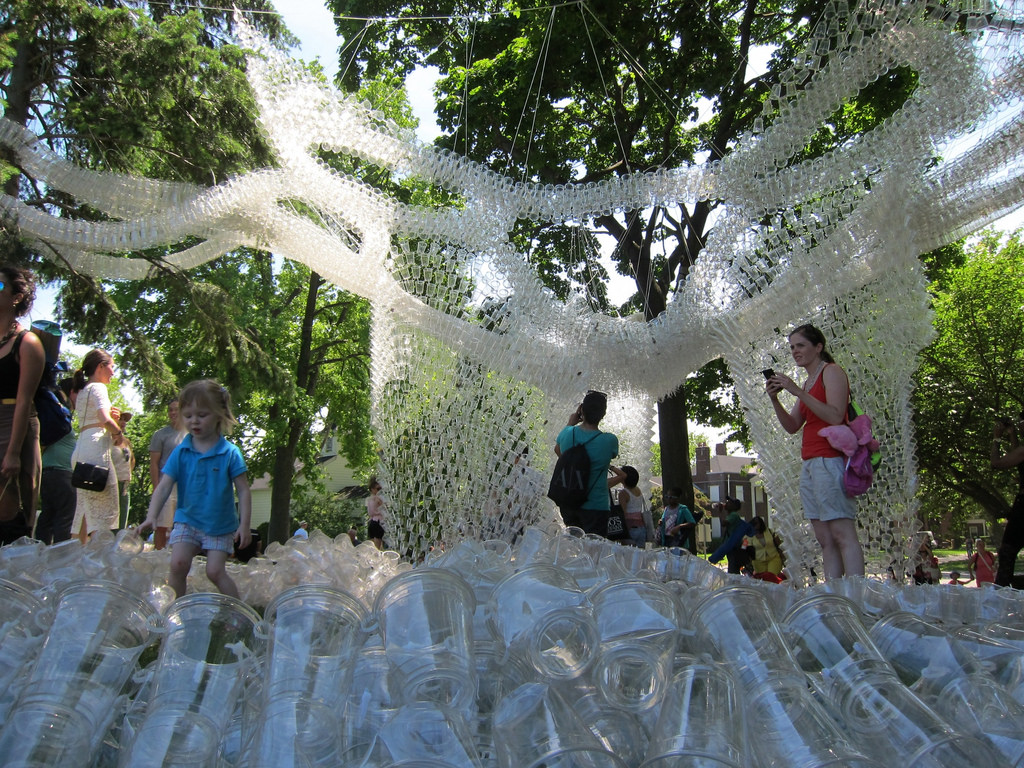 About the design team

CDR Studio: Lea H. Cloud, AIA, LEED AP BD + C; Jonathan Dreyfous, AIA, LEED AP; Victoria A. Rospond, AIA; Katya Zavyalova; Kimberly Tate, Assoc. AIA; Tiffany Jin; Evgenia Melnikova; Nikolay Martinov; Varvara Domnenko. Sustainable Engineering Services: Yelena Rayster, Structural Engineer CDR Studio is a full-service architectural firm with a diverse and creative staff committed to sustainable design—75% of whom are LEED Accredited Professionals (LEED AP). Their work covers a range spanning public, institutional, educational, commercial and residential projects, to furniture design and urban planning. In the past 10 years, CDR Studio has won nine American Institute of Architects, New York Chapter awards which include the Carousel Building on Pier 62, the Frederick H. Leonhardt People Center at the American Museum of Natural History, the Eileen Fisher Store in SoHo and Marine Company No. 1 Firehouse. Entering their 16th year of practice as a privately held company, CDR Studio is committed to creating architecture in the public realm. CDR Studio's work is distinguished by a holistic aesthetic that is appropriate to the client and the site, and their core value to create architecture that gives form to the client's vision. CDR Studio believes in well-designed architecture that engages the public, enriching our culture while giving integrity and dignity to the built environment. 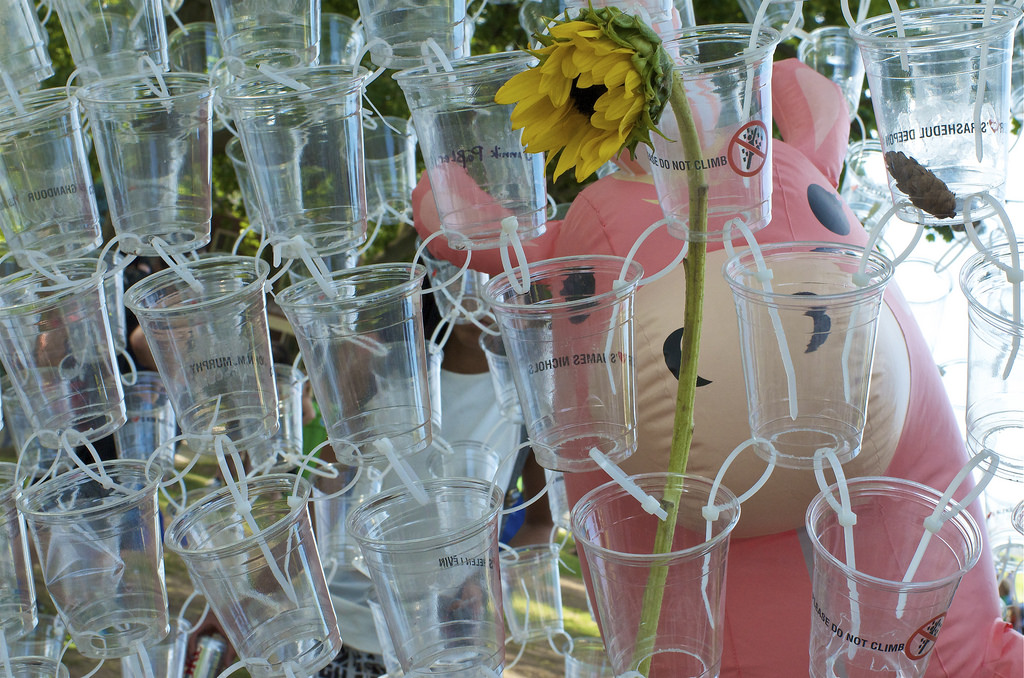 About The City of Dreams Pavilion:

The City of Dreams Pavilion is a gathering place for people to meet, learn about the arts programs on the island, be able to enjoy a performance or lecture, and experience the interaction of art and the historic context of Governors Island. Our theme for the pavilion, the City of Dreams, points toward the future. If we imagine a future New York City where anything is possible, what would it look like? In our wildest and most optimistic dreams, what is the future of the city?

FIGMENT is accepting donations to support the fabrication, installation, and maintenance of Governor’s Cup on Governors Island. To contribute, click here.

FIGMENT teamed with the Emerging New York Architects Committee (ENYA) of the American Institute of Architects NYC Chapter (AIANY) and the Structural Engineers Association of New York (SEAoNY) to host a competition to design and construct an architectural pavilion on Governors Island, the City of Dreams Pavilion. The 2013-2014 pavilion will be the fourth City of Dreams Pavilion. The result of the inaugural first competition, in 2010, was the Living Pavilion, designed by Ann Ha, Assoc. AIA, and Behrang Behin, Assoc. AIA. The second competition, in 2011, led to Burble Bup by Bittertang. The 2013 pavilion, Head in the Clouds, was designed by STUDIOKCA. Jurors for the 2013-2014 City of Dreams Pavilion competition were: John Czarnecki, Assoc. AIA, Editor-in-Chief, Contract; Susannah C. Drake, ASLA, AIA, Principal, dlandstudio; Mark L. Gardner, AIA, NOMA, Principal, Jaklitsch/Gardner Architects; Marc Leff, AIA, Partner at Deborah Berke & Partners; and Scott Lomax, Vice President, Thornton Tomasetti. Aleksey Lukyanov-Cherny, Partner, Situ Studio, acted as design mentor to the finalists and winning design team as they prepared their final submissions.

The jury initially reviewed nearly 200 design proposal submissions and selected five finalists who each had three months further develop their designs in response to the jury's comments. The four additional finalists included:

The future of the city will be determined by a creative mix of technology and culture, and an even more creative reuse of materials. As cities are an amazingly rich source of materials the ArtCloud Pavilion reuses clapboards and transforms them to a free-form structure that is composed for 99% with modules. The system allows visitors to choose and personalize their own piece of ArtCloud. Modular architecture makes people more carefully consider issues of optimization and prefabrication, and saves time and energy during construction. Without a doubt ArtCloud is a direct path to wiser thinking about sustainable living.

Dreamcatcher, a pavilion where imaginations are lifted, elevating your dreams, captures dreams at the idyllic meeting point of Governors Island, where people from all parts of New York can gather and encounter an experience unlike any other. We are proposing a simple, circular, lightweight structure that captures a changing collection of balloons. Why balloons? Because they're joyful, uplifting and downright dreamy. Choose your shade, let your balloon go, and dream a little dream.

Inspired by the infinite surfaces and curves of a Möbius strip, MÖBI water tower pavilion expresses the potential of adaptation, life cycle, and reuse of materials in the urban landscape. New York City's ubiquitous and iconic water towers are transformed through STUDIO V's design into a gathering space that celebrates Governors Island. Constructed from recycled redwood and cedar planks rescued from decommissioned water tanks, MÖBI offers a pre-fabricated, ecological construction process and multi-use environment that will afterwards be repurposed yet again—as wooden deck and furniture for our design for the LIC Biergarten. Much like Governors Island, MÖBI is designed for continuous adaptation and interpretation to serve the NYC community.

Our present city is overrun by private buildings, limiting access to public space. Urban Accordion is a microcosm of an alternate urban condition: a City of Dreams. Four fabric 'blocks' expand and contract, creating different levels of enclosure to suit a range of programming, while the space contained by the structures forms a larger communal area for events and chance encounters between the juxtaposed programs. Urban Accordion is a new urban condition: a flexible assembly for serendipity and public events that fluctuates to meet users' demands.

FIGMENT is a free participatory arts event held in 2013 in 13 cities in 3 countries on two continents, and attracting tens of thousands of participants each year. FIGMENT celebrates an abundance of creativity and passion, challenging artists and our communities to find new ways to create, share, think, and dream. Become a part of events in multiple cities and interactive exhibits on NYC's Governors Island throughout the summer season. For more information on participating cities, visit figmentproject.org.
FIGMENT is a 501(c)(3) not-for-profit organization entirely funded by grants and individual donations. FIGMENT accepts no corporate sponsorship of any kind. FIGMENT NYC is supported by public funds from the National Endowment of the Arts and the New York City Department of Cultural Affairs, in partnership with the City Council, as well as by the Fund for Creative Communities, supported by the New York State Council on the Arts with the support of Governor Andrew Cuomo and the New York State Legislature and administered by the Lower Manhattan Cultural Council.

It is the goal of the Emerging New York Architects Committee to encourage membership, participation, and leadership in the AIANY Chapter among intern architects, young architects (licensed 10 years or less), and emerging professionals in the fields of design and construction. The committee engages NYC's diverse emerging design professionals through lectures, design competitions, and networking opportunities, with a focus on Professional Development, Design Excellence, and Public Outreach. The AIA New York Chapter is the oldest and largest chapter of the American Institute of Architects. The Chapter's members include over 4,600 practicing architects, allied professionals, students, and public members interested in architecture and design. The AIA New York Chapter is dedicated to three goals: design excellence, public outreach, and professional development.

SEAoNY is a member organization of the National Council of Structural Engineers Associations. Presently, 39 states and the District of Columbia have structural engineers' associations, the largest of which is SEAOC, Structural Engineers Association of California, which was founded in 1930 and presently has approximately 4000 members. The association sponsors workshops, panel discussions, lectures and seminars with the aim of addressing topics of interest and concern to structural engineers. Our membership, which is over 500 members, includes individuals from most major structural engineering design firms in New York State. SEAoNY also reaches out to other professionals, outside the engineering community, who work in related fields with common interests. Currently, 10% of our membership are affiliate members who come from a variety of disciplines such as geotechnical, civil, construction management and architecture. The purpose of SEAoNY is to advance the art of structural engineering in New York by improving the flow of ideas and building the community of colleagues.