A distinguished jury has selected the winning design in the seventh annual City of Dreams Pavilion Competition: Cast & Place by Team Aesop (Josh Draper from PrePost/RPI-CASE, Lisa Ramsburg and Powell Draper from Schlaich Bergermann Partner, Edward M. Segal from Hofstra University, and Max Dowd from Cooper Union). This temporary pavilion will be assembled on Governors Island and open to the public for the summer 2017 season. 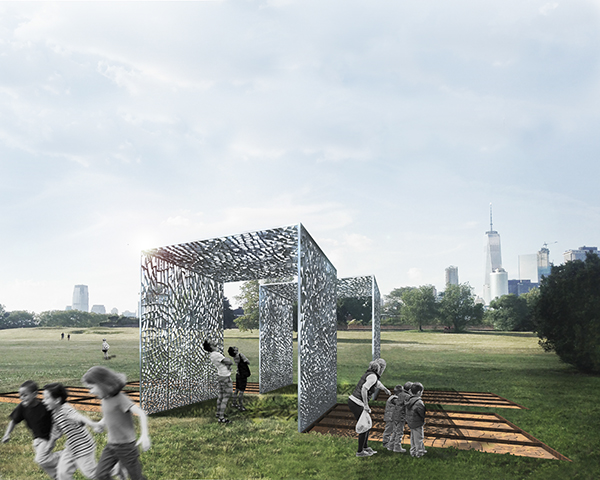 Cast & Place re-imagines waste as a transformative resource for our New York City future.  Soil dredged from the East River, the material also used in the construction of Governors Island, is laid out to dry and crack.  250,000 aluminum cans are melted down and poured into the cracked dredge. The results are light, strong panels that provide structure and shade, assembled into spaces for performance and play. Rain-soaked reflecting pools of dredge reveal the pavilion’s formwork as they dry and crack in the summer heat, inducing meditations on time, materiality, and the sources of our city.

FIGMENT is accepting tax-deductible donations to support the fabrication, installation, and maintenance of the pavilion on Governors Island for the 2017 summer season. Support their Kickstarter campaign here!