Over the past three summers, the FIGMENT summer-long sculpture garden on Governors Island has been a huge success, and has received significant media attention and a large number of visitors… over 200,000 over the course of the 2011 season.

This year, out of over 40 submissions, FIGMENT selected 10 amazingly creative, interactive, and sustainable sculpture projects, and heralds the return of our 2011 TreeHouse, that, pending funding, will find a temporary home on the Parade Grounds of Governors Island. In the 2012 FIGMENT Interactive Sculpture Garden, these highly interactive sculpture projects will be open and FREE for the public to enjoy while the island is open on Saturdays, Sundays and holiday Mondays from June 9 to September 23, 2012.

Look for temporary installations Touch (Off the Grid) and Reyongan Gede Interactive inside the TreeHouse!

Click on the images to see them in high-res!

Fictional Figures situates a collection of objects in the landscape, a family of forms at once similar and singular. The figures become the columns, tables and chairs for the library, arranging themselves in ways that create multiple scales of space, from the intimate (a nook to read) to the communal (a reading room). The project investigates the line between repetition and variation. At the same time, Fictional Figures plays a game of hide and seek in the landscape, using texture, material, form and color to blur distinctions between figure and field. Visitors are welcome to bring books and objects to the site that hold personal meaning to add to the growing collection at the outdoor Library. For more information, please visit newyork.superfront.org.

Pulling it too Tight by Kathy Creutzburg 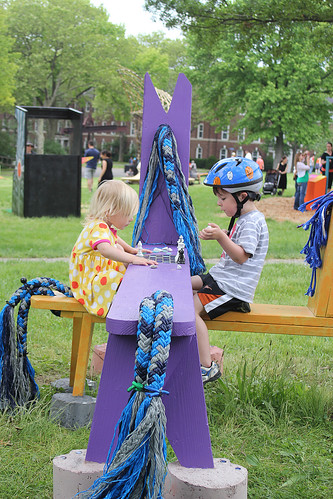 These overlapping benches are meant to resemble a herd of messy and unkempt animals needing to be groomed. You are encouraged to play games, braid hair or take a nap as you ride on their backs. The mosaic animal faces on the different benches were designed with the assistance of children at Manhattan East Middle School, during after-school art-making sessions. 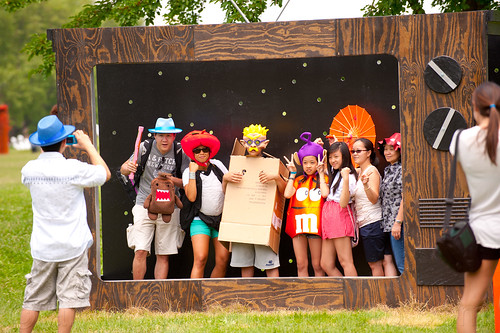 In Live! visitors may put on shows for each other and climb into and out of the oversized wooden TV screen, moving freely between observer and entertainer, all without directions. When no one is interacting with Live!, the holes in the rear panel suggest TV static. Visitors can submit photos or videos of their interactions with the screen to [email protected] and view them on the artist’s web archive: http://www.ashaganpat.com/live.html. Please scan the QR code on the sculpture and follow the instructions for sending your images to the artist, or simply visit this web address.
Free QR code Apps:
iPhone: NeoReader, Barcode, ScanLife
Android: QuickMark, Barcode Scanner, ScanLife 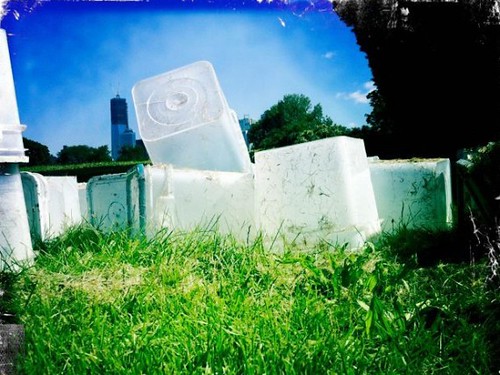 BucketCraft encourages participants to play and build with square recycled buckets, adding to a video stream of constructions with one another. This encourages play within a broad community through a collaborative sandbox space, that highlights the reuse of materials, and the reexamination of everyday objects. Every time a bucket is moved, the camera above takes a photo. Visit BucketCraft.org to play back a stop-motion movie of the different constructions—or view the camera live with your smart phone.
Please keep the buckets within the designated area.
Please do not stand on the buckets, or remove the lids.

The Circle of Intention by Suprina 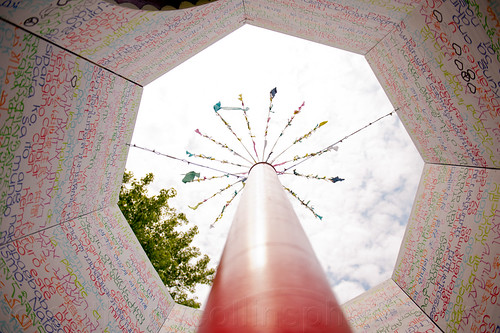 Inspired by the Tibetan prayer wheel, a hand-held meditation device, at the interactive Circle of Intention all religion is left out and all “intention of positive thought” is welcomed in. The interior walls of this highly decorated hollow globe are inscribed with a “Statement of Intention” translated into 30 languages spoken in NYC. You are encouraged to enter, reflect on the statement, then create and record your own “Statement of Intention” via video cameras embedded on the exterior surface of the globe. The artist is collecting these videos to stream on the web.

Face of Liberty by Zaq Landsberg 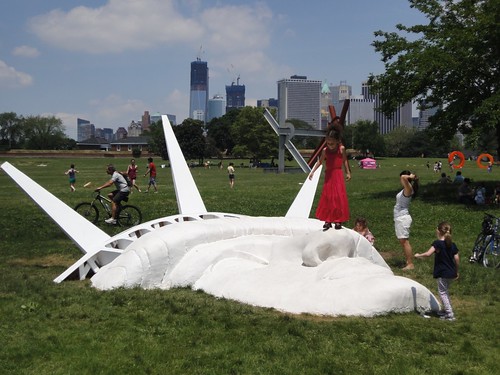 Face of Liberty is a 1:1 scale replica of the face of the Statue of Liberty. Unlike the famous Bartholdi statue just across New York Harbor, viewers can stare directly into the face of this Statue of Liberty up close, a viewpoint not possible on Liberty Island. Framed in wood and finished with resin, the sturdiness of the piece allows viewers young and old to walk, sit, climb, and slide down the gentle rises and slopes of the facial features. Face of Liberty is funded in part by a grant from Sculpture Space, Utica NY. 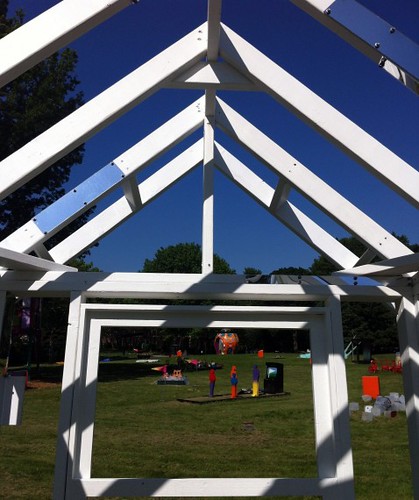 Composed of the open wood framing from three attic dormers, this architectural structure creates an intimate gathering space, provides shelter from the sun, frames views of Governors Island’s beauty, and, through an interior collage of mirrors, reflects both the landscape and viewers. 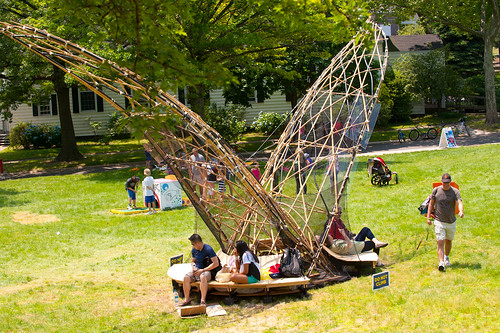 Eagle’s Nest is constructed of natural wood and bamboo. The weave of the wood “fabric” of the structure of the wings creates a shading effect and sense of enclosure. The base of the sculpture—”the nest”—is meant for lounging with natural wood chairs surrounding the semi-enclosed “nest”. Small children can play in the “nest” whilst adults lounge in the safety of the eagle’s wings. Eagle’s Nest alludes to the social fabric of family and nature that is part of the Governors Island experience, by representing an eagle caring for and protecting its young at its place of haven—the nest. 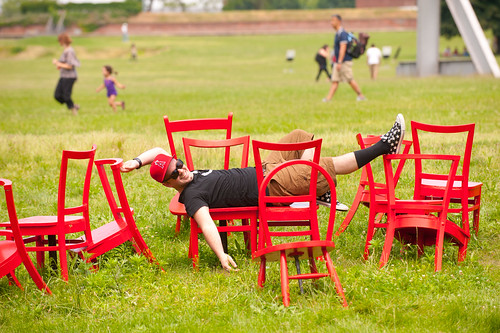 No Place to Sit (NP2S) contains almost unlimited places to sit, but every option is a compromise, a negotiation that requires thought and work on the part of the viewer. The chairs are stacked, overlapping, clustered or merged—seats are always shared. Visitors become “sitters” engaging with one another in a tight space that needs to be negotiated. NP2S requires that sitters become conscious about their position not only with respect to the sculpture, but also with one another and with the park itself, since each seat offers its own unique view of the surrounding space. 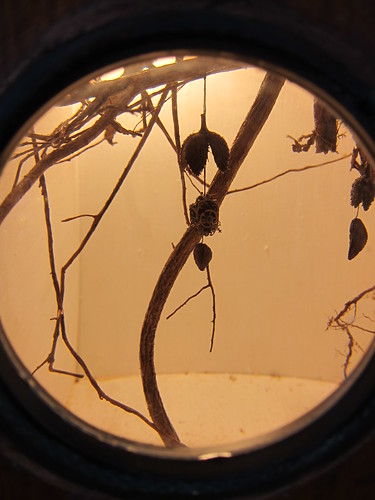 Que Sera Que Sera is a standing installation resembling an abstracted birdhouse. It is meant to complement the theme of Benjamin Jones’ TreeHouse, while enhancing its interactivity. This piece is made of found furniture and wood with varied functions. The viewer is able to manipulate actions from the outside. You can peer inside glass windows, observing a multitude of “worlds.” 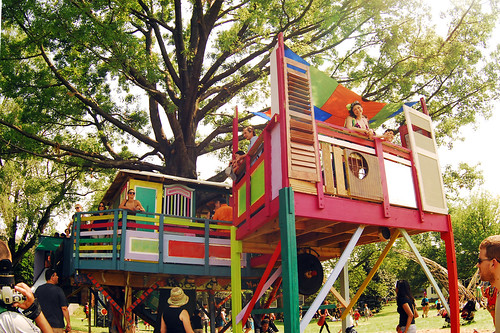 Returning to the island for its second year, TreeHouse is part nostalgic playground, part classroom. Encouraging the viewers to play, it is also meant to serve as an educational tool for sustainability issues. The project brings together both kids and adults through hands-on activities and is exemplary for the use of reclaimed materials both on a small and large scale level. TreeHouse and its surrounding playground activities are created entirely from reclaimed materials from the streets of Brooklyn and project partner Build It Green! NYC, a non-profit retail outlet for salvaged and surplus building materials. Wind and solar energy are used to power the activities surrounding it.

Find these temporary installations inside the TreeHouse: 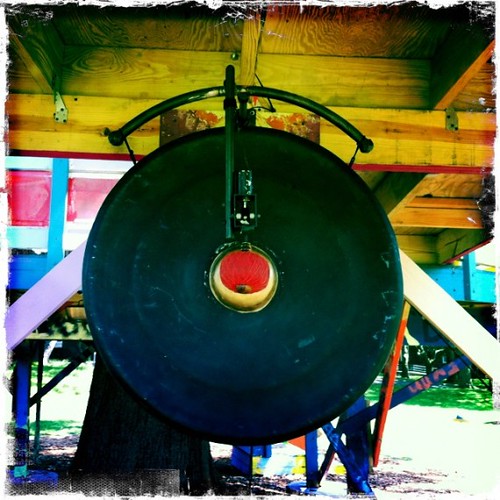 Reyongan Gede Interactive is a set of traditional Balinese gongs from a Gamelan Orchestra, mounted on steel brackets, retrofitted with robotic mallets and arcade buttons that, when pushed gently by visitors, trigger musical sequences. It is part of the collection of instruments from the Gamelatron project, the world’s first fully robotic gamelan orchestra by Aaron “Taylor” Kuffner with The League of Electronic Musical Urban Robots. Reyongan Gede Interactive is temporarily installed in the TreeHouse until it goes on tour to Japan in July 2012! For more information visit gamelatron.com.

Touch (Off the Grid) by paperJAM 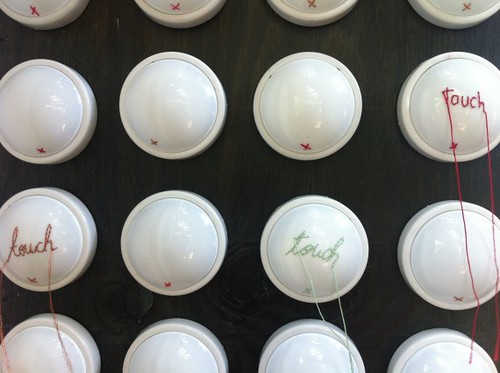 TouchLights are participatory public street installations initiated by paperJAM, adhered as temporary sites of interaction along public walkways, activating and illuminating paths otherwise obstructed, dormant, or poorly lit. Installed in this year’s TreeHouse, Touch (Off The Grid) consists of a large grid of TouchLights, mounted on board and wired to solar batteries – effectively “off the grid” – engaging the FIGMENT principles of participation, self-expression, civic responsibility, leave no trace, and immediacy. The piece is open for activating play and constant change at the hands of visitors. Participants press the lights, turning them on and off to create patterns of illumination.

The FIGMENT 2012 Season Long Sculpture Park was curated by Katherine Gressel and Chris Jordan, with help from a 7-person jury, and the entire FIGMENT NY team.