In addition to our three-day FIGMENT event and our City of Dreams Mini-golf course, this year we have added 16 large-scale interactive sculpture to the City of Dreams. In the spirit of FIGMENT, these works are participatory, inviting the viewer to think, act and respond.

The sculpture garden, located in the City of Dreams area with the miniature golf course, is totally FREE and open to the public on Fridays, Saturdays and Sundays while Governors Island is open, from FIGMENT on June 12 to October 4, 2009.

The purpose of the HiveMind is to educate and inspire more public focus on the honeybee. Bee symbolism is pervasive in not only as an ideal structure of societal organization, but as an emblem of industry, cooperation, and mutual aid. The honeybee is also a symbol of surrendering ego in order to allow creative flow that not only nourishes the individual but the community [also helping in ensure it’s very survival].

The HiveMind is a monument in honoring the existence of the honeybee, and its deeply entwined relationship with humankind. The garden within the sculpture and the human interaction that is required for activation of the metal flowers’ movements signifies the honeybees’ contribution to harboring life on earth. 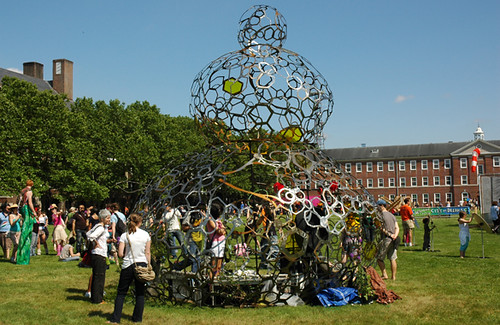 The Temple of Truth by Jennifer Upchurch, Chris Niederer, and Douglas Hart

Designed in the shape of a three-dimensional wooden eye facing the sky, the open-air Temple of Truth is intended as a place of exploration, contemplation, mourning, and personal expression. The curving design of the sculpture encourages visitors to walk through the heart of the eye, sit down at its center, and interact with the Temple’s structure by leaving contributions of art, messages, and other ephemera on its wooden walls.

For more information about the project see figmenttemple.com 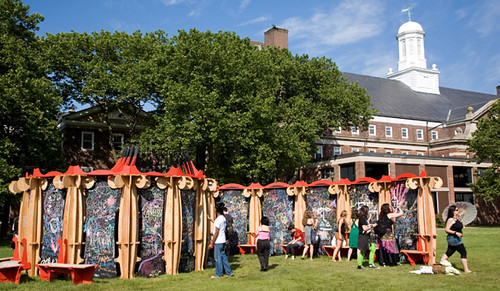 Rhythm and Rest by Animus Collective

Evocative of a large scale, three-dimensional infinity sign, Rhythm & Rest is an exploration of the interruption and continuation of space. The structure is made out of Oak with subtle steel reinforcements for durability. Connecting each side of the oak frames together are oak wooden dowels, essentially mimicking the way a ladder works were laid down on its side. Where people sit, the ‘‘rungs’’ are bunched up together to create a comfortable seating area. As you moved up the curve, the rungs spread out, allowing for the light and shadow to interplay depending on where you sit. People are encouraged to sit, recline, and explore the piece at will. 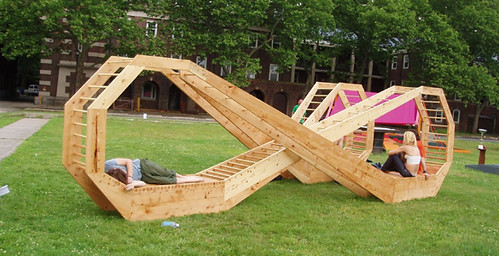 A mystical creature crafted entirely from furniture left on Brooklyn’s sidewalks on ‘‘trash night,’’ Discarded deals with the evolution of objects: from trees to raw materials to commodities to household items to trash to art. By creating a new and beautiful use for objects that have been discarded as useless, this piece blurs the borders between trash and art, scavenging and craftsmanship. The piece challenges our rampant ‘‘consume and discard’’ mentality, instead proposing a careful consideration of purchasing, ownership and the ecological consequences of generating trash. Discarded is a wooden dragon crafted entirely from furniture discarded on the streets of Brooklyn.

This work is a recipient of the 2009 Oscar M. Ruebhausen Commission from the Greenwall Foundation, in addition to support from the Black Rock Arts Foundation. 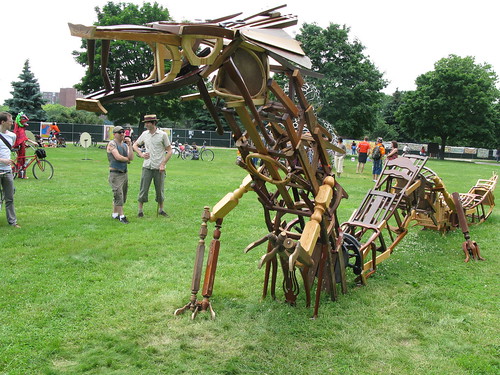 Visitors enter the structure through the narrow space between its two sections and must adapt themselves to their surroundings, as water flows around and over the structure and a series of lamps illuminate it from within. The body has to be adapted to the space; you have to become part of the space. It is symbolic of how immigrants come to the United States and learn to adjust to a new culture and become part of it. Just as people must adjust and morph their bodies to fit into the sculpture, immigrants are doing the same. 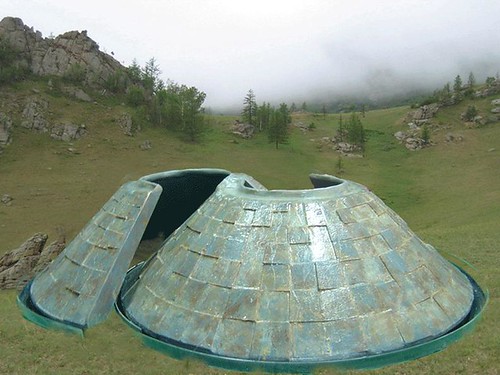 Bernard Klevickas is a sculptor who utilizes industrial processes in an expressionist manner to create objects of meticulous refinement with an interest in exploring the possibilities of surface and form. For over five years Bernard has worked as an art fabricator for various artists including Jeff Koons, Louise Bourgeois, Frank Stella, and others. 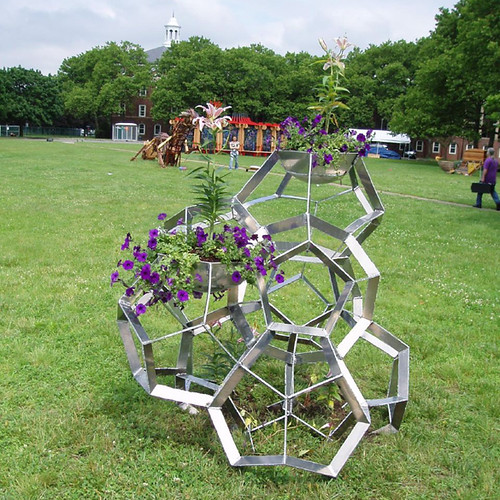 A garden path is “drawn” into the grass on Governor’s Island, relating to the site’s history and use. It may reveal a route trod long ago when the island was a strategic encampment. It might mark the routine of more recent Coast Guard duty. It’s meander may demark a figment of the future. The installation is a of tracery of human activity, past and present, in which an image is literally drawn into the material surface of the city park. The image itself is a visual reversal of traditional garden paving where grass grows up in the spaces between paving stones. For this installation the “spaces” are made from stone, and the “pavers” are grass. 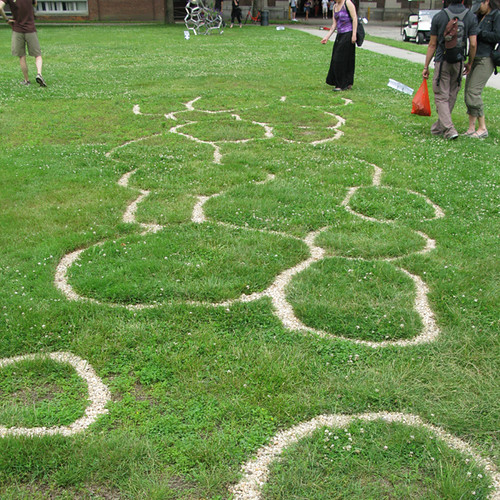 LIVING in Our Own Happy Apocalypse

Jesse Walker and LIVING company come together for the summer of 2009 to set a stage with which to contemplate living in our own happy apocalypse on Governors Island where others may join them on their explorative journey. The sign is located on the western mound of Fort Jay and throughout the summer gatherings will be organized at the foothill below the sign. Jesse’s work brings together wide open spaces and simple iconic figures. LIVING is a new pop-up company phenomena that emerged with the fall of the economic empire and the shockwaves of the global recession. Unlike companies before it that failed in their pursuit of capital wealth, LIVING was driven by the intent to generate the wealth of life experience. See more about the artists and their planned gatherings at – www.jdwalk.com and www.alivingcompany.com. 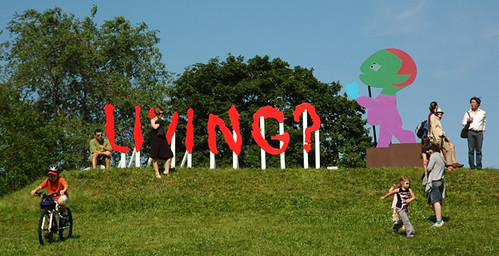 Guns & Poses is a series, which takes form in a garden of three large rosebushes constructed from steel, gun catalogs and fashion magazines. The individual bushes range from 36″ to 50″ in height. The flower constructions are built off wire armatures and coated in resin. These works are sturdy, completely waterproof, and able to weather the outdoors. The premise of ‘‘Guns and Poses’’ is to call attention to the fact that one generally consumes a barrage of images of violence and airbrushed and altered females without acknowledging their ties to reality. 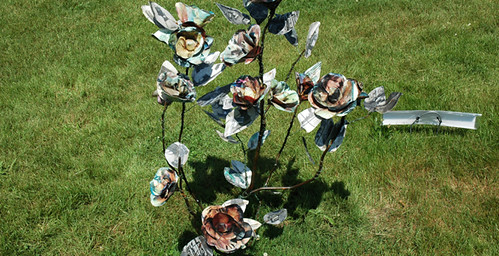 MORE is an arts collective (the Ministry Of Random Events) from Australia. For their first arts installation in the United States, MORE will utilize approximately 20-30 plastic industrial drums (generally used to transport shampoo etc) and assorted percussive implements which are then played by members of the public using wooden dowels (curtain rods) with the ends wrapped in material, serving as drum sticks. The drums will be painted back and have ‘MORE’ stenciled on in yellow, and will be weighted down so that they cannot be easily moved. 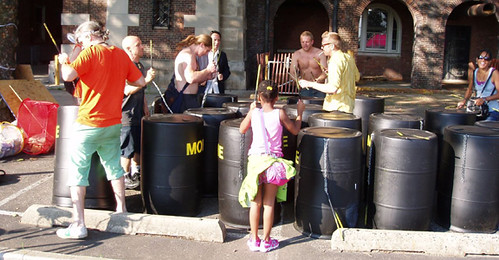 For this site specific project the artist will create a ship structure formed entirely out of salvaged materials, including lumber, a found shopping cart, and painted wax. This derelict formation references the remains of a plundered vessel. It is constructed near life scale with the shopping cart as the central support from which the two halves of the ship emerge. Contained in the hull, the cargo of the ship consists of similarly salvaged items of necessity and curiosity. The outer shell of the boat is made impervious to water through the application of encaustic. The wax is carved and painted depicting a visual mythology of the object’s history. This project reanimates found elements creating a narrative of self sufficiency, reclamation and buoyancy. 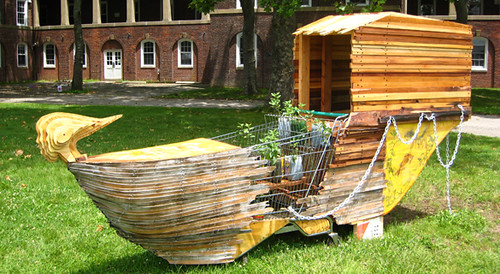 The Mandala Maze is a 16’ x 16’ maze, made of wood that is close to the ground. The maze functions like a labyrinth, more for contemplation than as a puzzle to be solved. 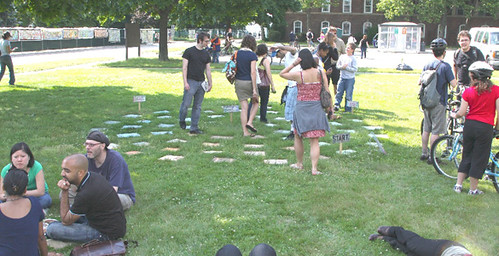 N7 is an international arts collective with members in the US and Europe. Pavilion N7 is an opportunity for an international collective to collaborate on an installation project in New York. Each N7 artist creates a highly textured digital image, which is emailed to the members of the collective in New York. These images are professionally printed on 12′ x 12′ vinyl tarps and grommetted. A steel frame is welded together to support these tarps, and to form a shadow box of art, with images on both the inside and out. 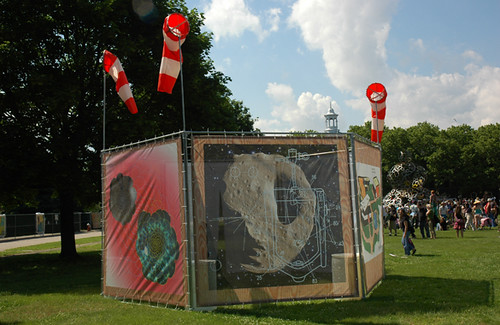 Minute of Parallax by Jamie Leo and Chris Jordan

This installation involves two primary components: mirrors on yolks and a varied fragmented reflective object. By aiming one or many of the mirrors at the fragmented object, viewers activate the sculpture with sunlight, causing moving reflections to appear in the shaded area around the fragmented object.

The parallax of this installation revolves around the duality of individuals giving and receiving. By aiming one of the Minute of Parallax mirrors, activating the installation with sunlight, one is gifting viewers near the fragmented object with light. This universal gift is fleeting though, due to the rotation of the earth. After roughly a minute, the mirrors would no longer be in tune with the fragmented object, and require readjusting to continue streaming sunlight at the shaded area. The elements of nature are amplified and accentuated, challenging the viewer to connect with one another through light and wind, as well as the visualization and beauty of nature that is often overlooked in an urban setting. 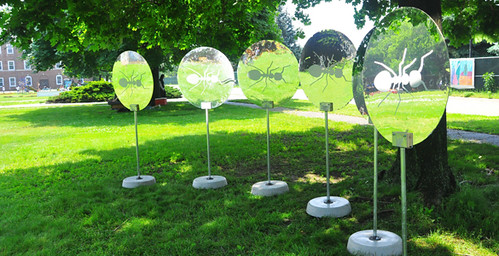 Stir Up by Mollyne Karnofsky

Our perception of any image can be altered, and any familiar image can be created in an unfamiliar way. The model for this sculpture is a serpentine reptile or a snake. Rather than constructing it with a solid material, unlikely objects are used to construct a snake-like piece. Plastic bottles combine in a series of coils and are connected with aluminum wire, allowing them to bend. The coils are connected in layers with wire. The top of the sculpture rises upward above the coils and is placed on a weatherproof platform. The sculpture in its form assumes the gesture of a serpentine reptile, but it is friendly in its whimsical and colorful nature. While in reality a snake may be threatening, this sculpture invites participation by the viewers in a flight of their own imagination. 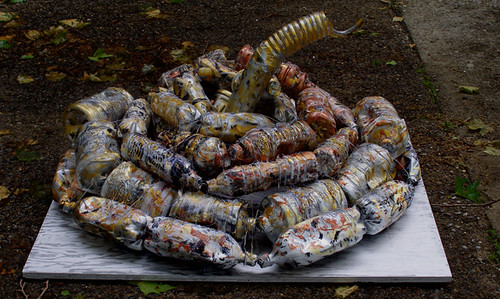 Agony of Man by Steel Neal

The Agony of Man is a 1200 pound, 3 times life-size anatomically correct rendition of the human form built entirely out of steel (scrap metal). Some of the components include: I-beam, railroad track, rebar, boilers, New York City garbage cans, and bits (the teeth) from road resurfacing equipment. The Eye/Zygoma bone is salvaged from the original park benches at Madison Square Park. The ribs are salvaged from the original concrete island of Worth Square, where all the water from upstate New York comes to lower Manhattan. The inner thigh muscle (Sartorius) is made from an extinct type of rebar salvaged from the original foundation of the Union Square Subway Station. Some of New York’s construction history can be found in the construction of The Agony of Man. 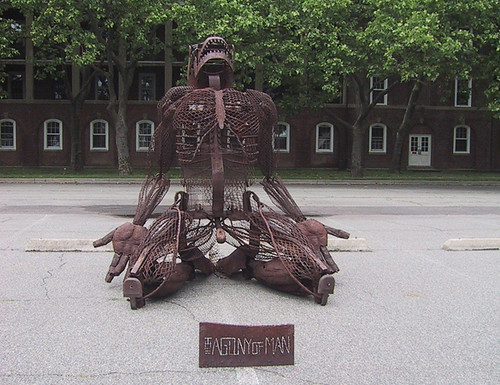