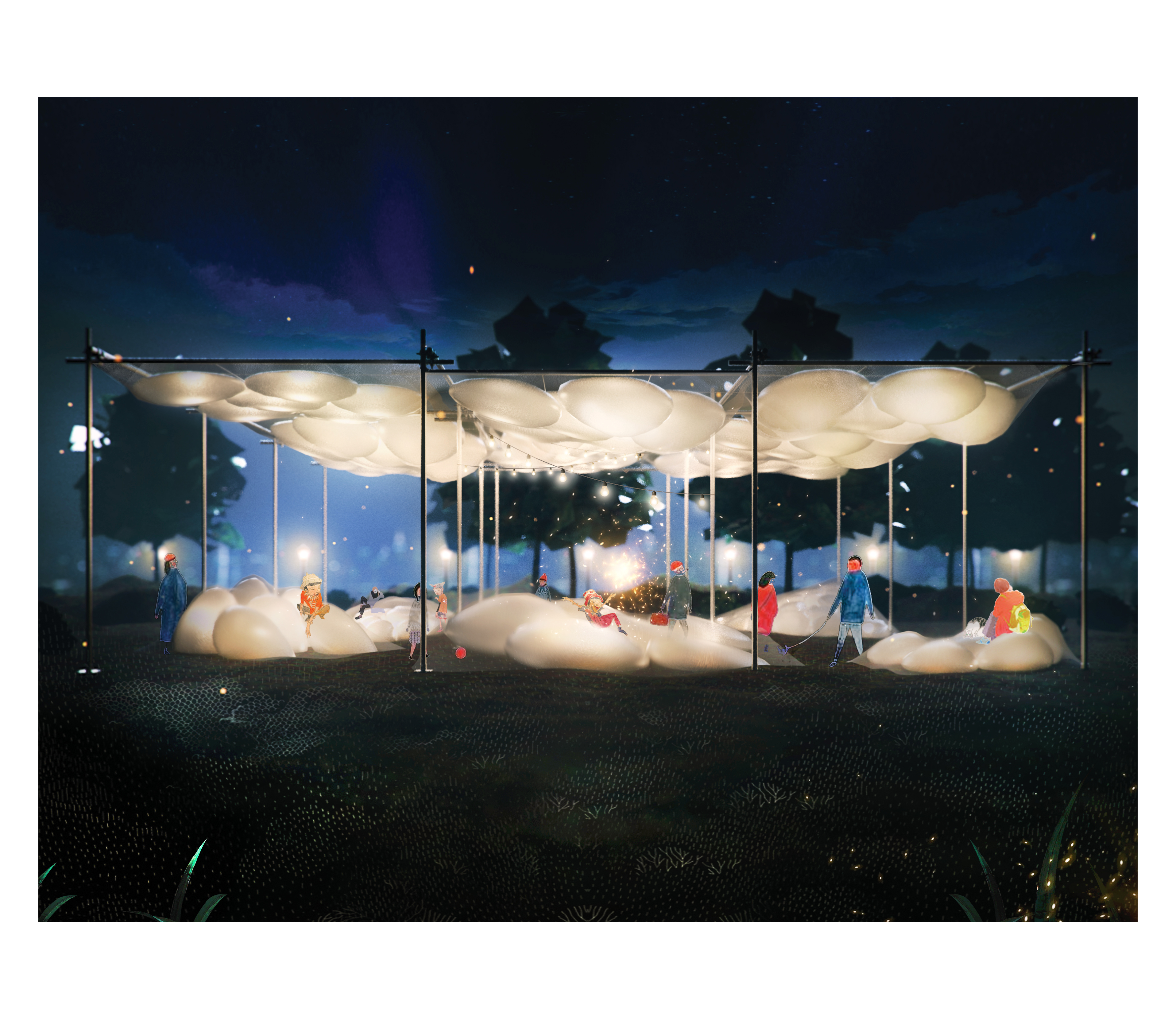 New York, NY February 20, 2020 – The 2020 City of Dreams Pavilion jury has selected two winners in the 10th annual City of Dreams Pavilion Competition: The Pneuma by Ying Qi Chen and Ryan Somerville and Repose Pavilion by Parsa Khalili. This year’s jury selected both designs for creatively engaging with the competition’s prompt to reconsider the architectural profession’s relationship to material waste and sustainability. However, due to time, space, and fundraising constraints, only The Pneuma proposal will be assembled on Roosevelt Island and open to the public for a month over the summer 2020 season, from the FIGMENT NYC event on June 6-7 to early July.

The annual City of Dreams Pavilion Competition, so named for its focus on the future of a world that faces strains on both economic and natural resources, aims to promote sustainability-oriented thinking in the architecture and design professions, inviting designers to consider the environmental impact of their designs and the full life-cycle of their materials. The City of Dreams Competition is hosted by FIGMENT, the Emerging New York Architects Committee (ENYA) of the American Institute of Architects New York Chapter (AIANY), and the Structural Engineers Association of New York (SEAoNY).

The Pneuma team will work with FIGMENT, ENYA, SEAoNY, and the Roosevelt Island Operating Corporation to select the exact site for installation, refine the design, obtain necessary approvals, and fabricate and install the pavilion on the island.

The Pneuma has received the generous material support of Twitchell (EarthTex Fabric) and Colgate Scaffolding NYC (rental scaffolding), and is accepting tax-deductible donations to support the fabrication, installation, and maintenance of the pavilion on Roosevelt Island this summer. Help to realize this project by contributing to the project’s Kickstarter campaign by following this link.

The Pneuma by Ying Qi Chen and Ryan Somerville acknowledges that efficiency, in the world of construction, hinges on two factors: weight-to-volume ratio and scalability. The Pneuma pivots away from traditional methods of building with rigid and massive materials, opting instead to use air. Although air is frequently explored as a building medium, there has yet to be a standardized mode of construction with it. In response, The Pneuma uses a finite set of mass-produced materials and typical assembly details to create an infinite set of formal expressions. Using recycled exercise balls, cradle-to-cradle fabric, and rented scaffolding, the designers will create a series of amorphous geometries that range from canopies to seating elements. The taut fabric registers nuanced air pressure changes in the inflated balls, generating an unlimited array of forms with a limited set of modules.

Ying Qi Chen is an architectural designer with an interest in creating affordable designs by aestheticizing performative construction elements. Qi has previously collaborated with OMA, DS+R, and Philip Beesley; She is currently working at LOHA. Qi received her Bachelor of Architectural Studies from Waterloo University and her Master of Architecture from Princeton University.

Ryan Somerville is a motion graphics artist based in Los Angeles. His interest in cinematography and animation stems from performing and filming freestyle BMX during his formative years. Sommerville graduated from the Fashion Institute of Design & Merchandising in 2010 and has previously collaborated with Blur Studios.

Help to realize this project by contributing to the project’s Kickstarter campaign by following this link. 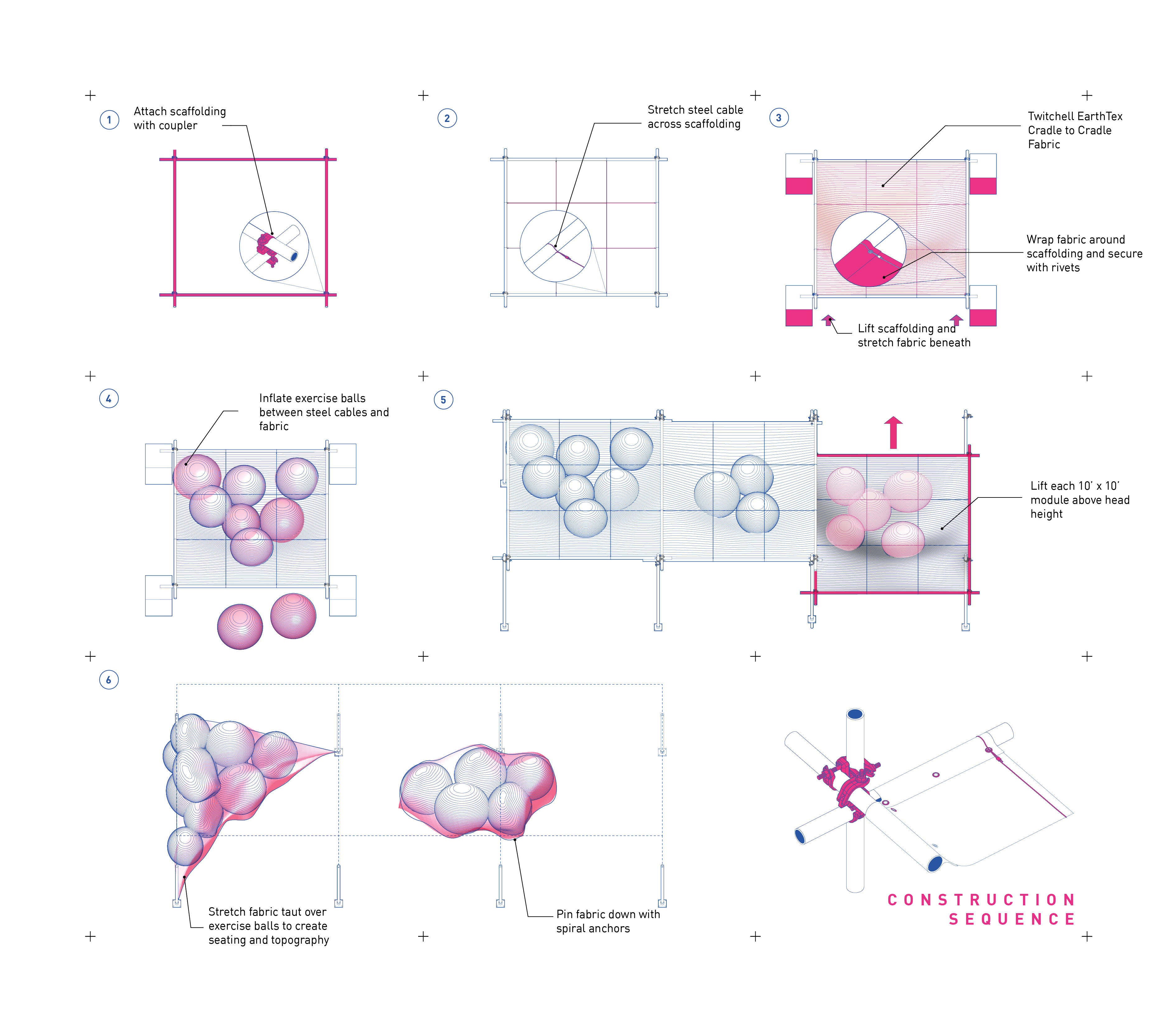 Repose Pavilion by Parsa Khalili explores the angle of repose as both a natural phenomenon determined by the unique properties of a granular material but also as a semiotic device that serves as an important metaphor for the current environmental crisis. Repose Pavilion seeks to operationalize this sensed instability and derive an architectural language that also informs, directs, and challenges architectural notions of tectonics, structure, and construction. The project’s conceptual basis stems from our society’s shift from a stable ecology to an unstable one, from solidity to fragmentation, from stasis to imbalance, from the natural to the manmade. Repose Pavilion represents this shift, instrumentalizes it as a concept, and creates an experience that compels visitors to contemplate where architecture and people will go next. The pyramid, one of civilization’s oldest formal products, is a symbol of balance and power. Through its doubling, inversion, and stacking, it produces an uncanny artifact, an architecture of perceived instability.

Parsa Khalili is a licensed architect and educator based in Brooklyn and a Visiting Adjunct at the Princeton School of Architecture. He is a Partner at Karpf Khalili Architects, but also runs a small, experimental studio, WAZEONE, which develops architectural ideas through teaching, writing, competitions, and speculative proposals. His research and work have been supported and showcased by a broad range of international publications (Log, Project Journal, Nevertheless, Sharestan, Pidgin, SAC Journal) and institutions (Graham Foundation, SOM Foundation, Yale University, UIUC Board of Trustees). His interests revolve around issues of design criticism, non-western forms of Modernism, visual and diagrammatic representations, and new digital media. 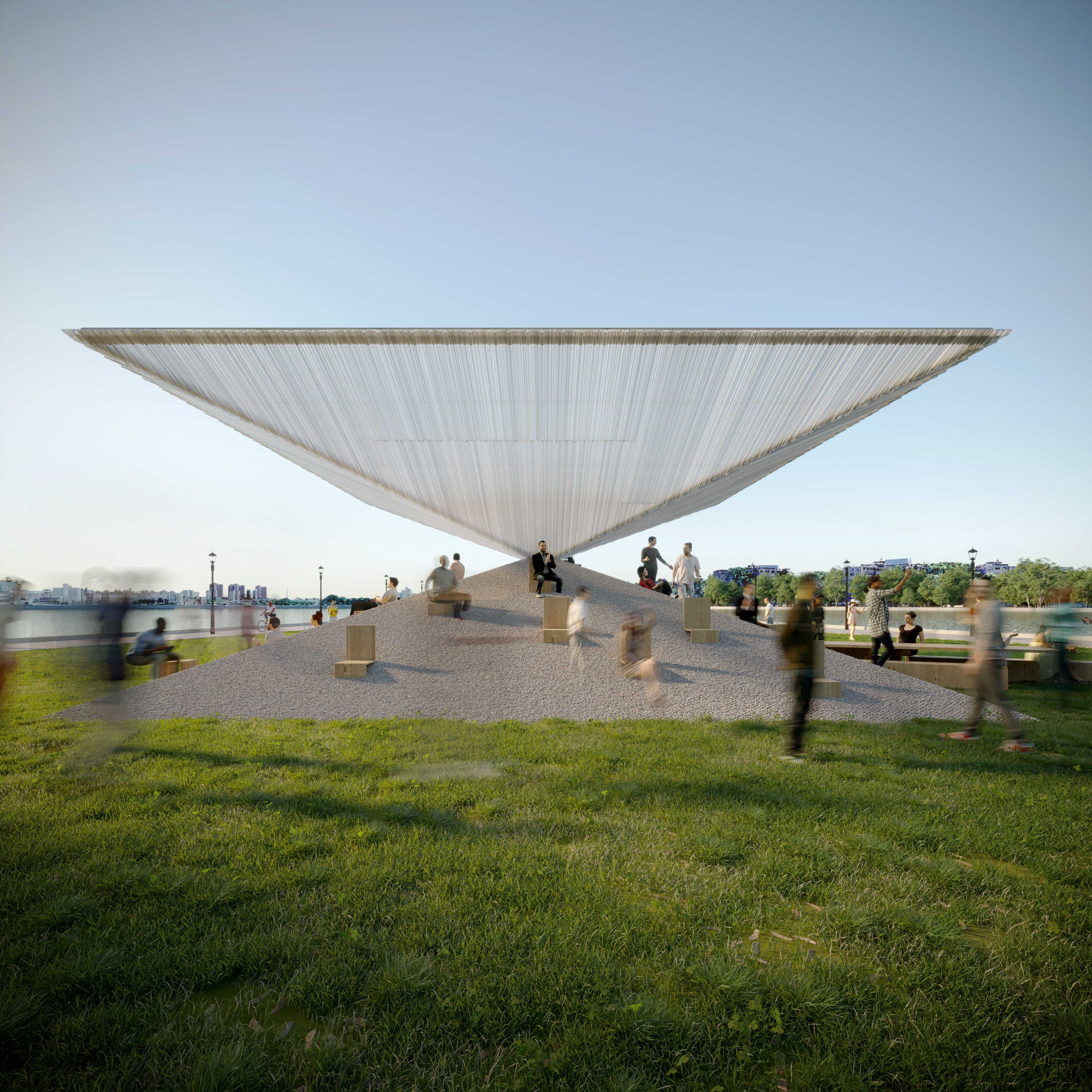 ABOUT THE CITY OF DREAMS COMPETITION

The City of Dreams Pavilion competition is a collaboration between FIGMENT, the Emerging New York Architects Committee (ENYA) of the American Institute of Architects New York Chapter (AIANY), and the Structural Engineers Association of New York (SEAoNY) that invites designers to design and construct an architectural pavilion. The competition began on Governors Island in 2010 and moved to Roosevelt Island for the 2019 season. The Pneuma, the winning design the competition’s tenth cycle, will be installed on Governors Island for FIGMENT NYC on June 6-7 and will remain on view through early July.

The City of Dreams Pavilion is a gathering place for people to meet, enjoy a performance or lecture, and experience the interaction of art and history in Roosevelt Island. The competition prompts designers to look toward the future. If we imagine a New York City where anything is possible, what would it look like? In our wildest and most optimistic dreams, what is the future of the city? Today, economic and natural resources are limited; a new way of thinking is necessary to solve the problems faced by the world. The City of Dreams Competition asks entrants to design a temporary structure in the most efficient and sustainable way possible. Designers must consider the entire life cycle of the building materials in their submission, either by identifying companies that produce “cradle to cradle” products, garnering sponsorships from environmental or socially conscious groups, or re-using waste from construction sites. Ultimately, the goal is to create a pavilion that has net zero impact and that serves as a prototype for a new, truly sustainable way of thinking about design and construction.

FIGMENT catalyzes and celebrates an abundance of creativity and passion, challenging artists and our communities to find new ways to create, share, think, and dream. FIGMENT’s free annual participatory arts event began in New York City in 2007 and has expanded to have hosted 73 events in 20 cities in 5 countries to date, engaging over 50,000 people a year in cities around the US and abroad. In New York, FIGMENT will host a weekend-long participatory art event on Roosevelt Island on June 6-7, where the Pneuma pavilion will debut. For more information, visit http://figmentproject.org.

FIGMENT is a 501(c)(3) not-for-profit organization entirely funded by grants and individual donations. FIGMENT accepts no corporate sponsorship of any kind. FIGMENT NYC is supported by public funds from the National Endowment for the Arts, as well as the New York City Department of Cultural Affairs, in partnership with the City Council, as well as by the Fund for Creative Communities, supported by the New York State Council on the Arts with the support of Governor Andrew Cuomo and the New York State Legislature and administered by the Lower Manhattan Cultural Council.

It is the goal of the ENYA Committee to encourage membership, participation, and leadership in the AIANY Chapter among intern architects, young architects (licensed ten years or less), and emerging professionals in the fields of design and construction. The committee engages NYC’s diverse emerging design professionals through lectures, design competitions, and networking opportunities, with a focus on Professional Development, Design Excellence, and Public Outreach.

Founded in 1857, AIA New York is the oldest and largest chapter of the American Institute of Architects. The Chapter’s members include more than 5,500 practicing architects, allied professionals, students, and public members interested in architecture and design. AIA New York is dedicated to three goals: design excellence, public outreach, and professional development. www.aiany.org

The association sponsors workshops, panel discussions, lectures and seminars with the aim of addressing topics of interest and concern to structural engineers. Our membership, which is over 500 members, includes individuals from most major structural engineering design firms in New York State. SEAoNY also reaches out to other professionals, outside the engineering community, who work in related fields with common interests. Currently, 10% of our membership are affiliate members who come from a variety of disciplines such as geotechnical, civil, construction management and architecture. The purpose of SEAoNY is to advance the art of structural engineering in New York by improving the flow of ideas and building the community of colleagues. www.seaony.org

FIGMENT is a free participatory arts event that celebrates creativity by challenging artists and participants to find new ways to create, share, and dream. FIGMENT NYC will take place on Roosevelt Island.