For the past 9 summers, FIGMENT has produced an Artist-Designed Minigolf Course on Governors Island in New York City that is free and open to the public. The course has received critical acclaim and continues to delight thousands of visitors of all ages each summer. Our aspiration is to make this years’ 10th-anniversary edition of the FIGMENT Minigolf Course the most visually stunning, interactive and fun to play yet!

FIGMENTs mission is to build community through participatory art, and The Artist-Designed Minigolf course provides a great template for artists to create work with which others can interact. For players minigolf provides an easy point of entry to participatory art: almost anyone can pick up a club and ball and interact with the art.

This year’s theme is “New York City Has the Beat.” We are fortunate to live, work and play in one of the world’s most musically vibrant cities. This year’s minigolf holes relate to the sounds of the city or its music scene of the past, present or future.

Below are the 9 winning hole designs of 2017. Come out this summer to play them all!

Sign up to Volunteer for The Minigolf Course Here! Your volunteerism makes this course happen and allows tens of thousands of people to play the course for free throughout the summer. You will be stationed at the minigolf kiosk, passing out clubs and balls, and soliciting for donation. It is a great opportunity for anyone who wishes to engage with the public, support free, interactive activities in NYC, and enjoy a beautiful day on Governors Island. 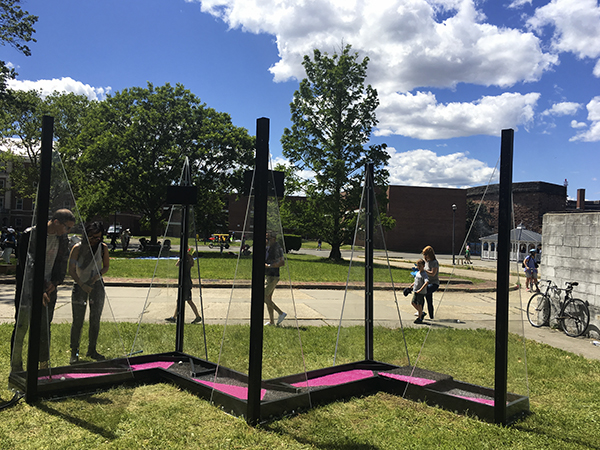 MINImalist GOLF is our homage to the New Yorkers who transformed our expectations of music through two musical movements known as minimalism and serialism. Coming out of New York's "downtown scene" of the 1960s, composers including John Cage and Philip Glass have repeatedly reinvented concepts in music, stepping away from the western classical traditions in favor newer experimental forms. We combine these musical elements with visual art by using electronic sensors powered by a microcontroller (a small, programmable computer) to trigger the performance of different segments of music composed by contemporary New York musicians. 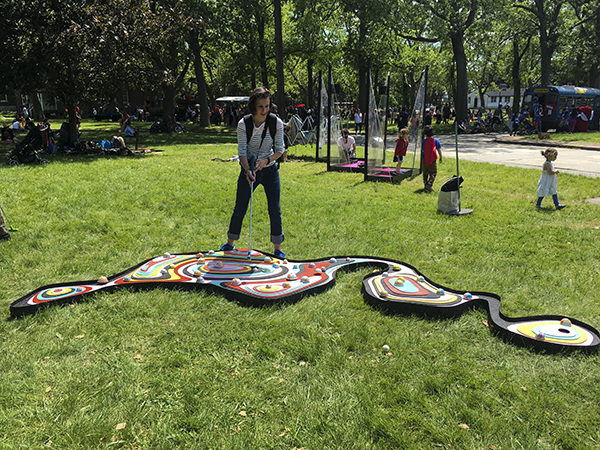 Bells are an essential part of the New York City soundscape. Their sonorous presence atop church spires disrupts and regulates our day, reminding us to take pause and reﬂect. We make reference to these bells with a landscape of 65 hand-made ceramic bells that will be mounted on a soft and vibrant topographic landscape. Minigolfers will putt their golf balls across undulating colors and clusters of ceramic ﬂora that will chime when bounced against, producing an impromptu music for Governor’s Island. 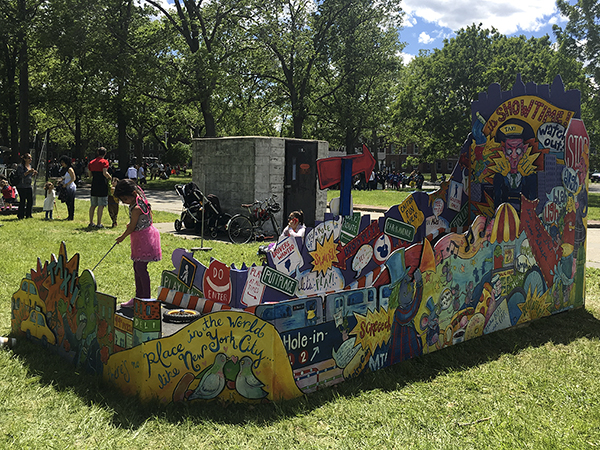 
New York City streets certainly have a beat of its own. It's exhausting and overwhelming. It's exciting and energizing. It's unapologetically New York City. Honk Honk! Beeeeeep! Get out of my way! invites you to putt your way through people rushing about, angry traffic jams, street performers, and all the wonderful and weird nuances and noises of New York City. Experience all of New York City in one bright and colorful minigolf hole. 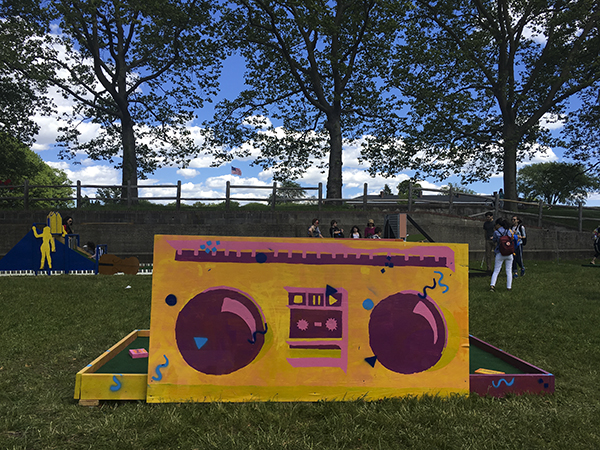 The boombox - the ultimate throwback symbol to the best music scene New York has ever cultivated. If Grandmaster Flex played mini-golf, this would be his jam. This boombox is a little bit different from what the b-boys might expect. Cassette tape obstacles lay in the ball's path and a hidden PLONK! lies somewhere on the way to the hole! 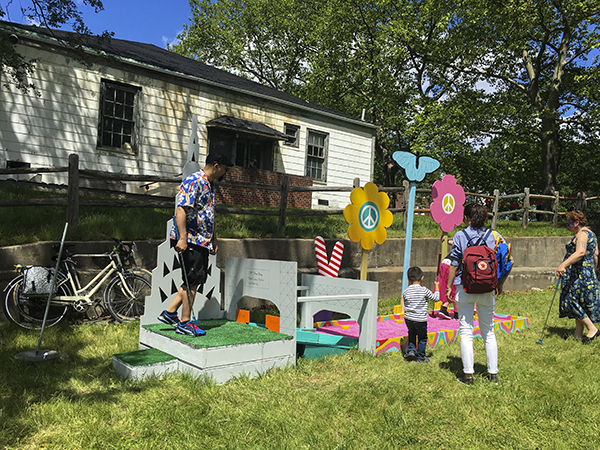 Inspired by the 59th Street Bridge Song, also known as Feeling Groovy. Putt across a xylophone bridge to a happy place where 60’s style flowers are growin’ and all is groovy. PEACE.

Hole #6: Chiming in with Chamber Music by The Cellos 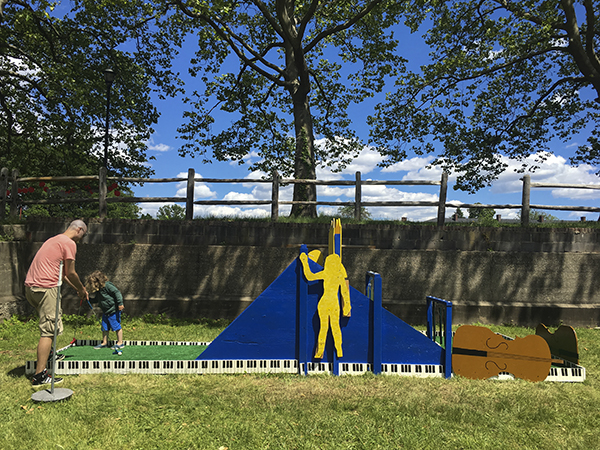 Make resonant connections to New York City’s musical heritage when you send your golf ball through chimes tuned to classical masterpieces. Listen for the notes of Bach, Mozart and New York City's own George Gershwin! 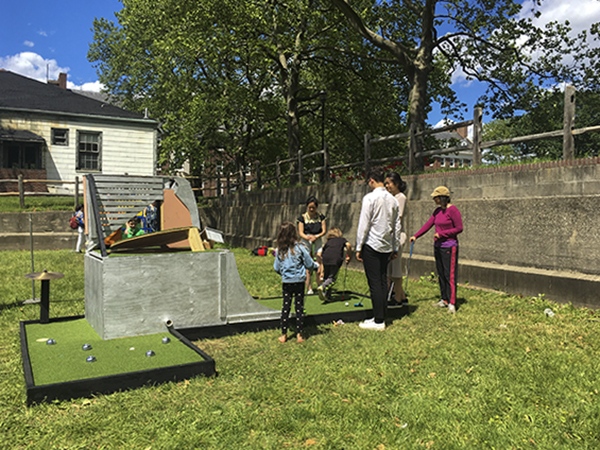 Noise can annoy the most cavalier of city ears, so here's to pleasant sounds for near ears to hear. Steer sheer right for sincere chimes of cheer or disappear after spinning round a hemisphere tier. Veer from leery interfering to persevere over jeers of pinging and turn the smears of dreary blear into more dear melodies of revere. 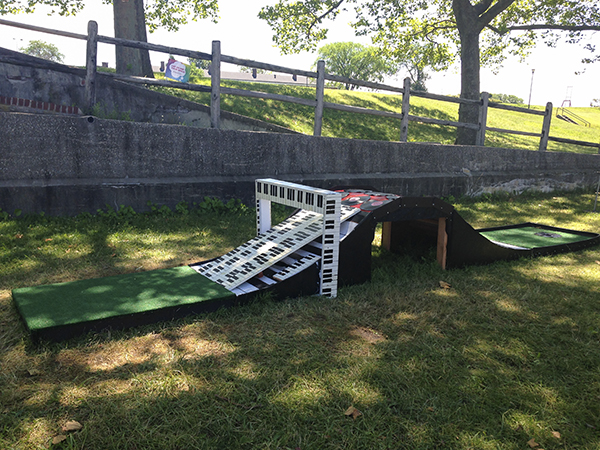 Hit It is inspired by the diverse and immense musical talent of the city including the legendary streets of Broadway and the Tin Pan Alley. Tee the ball across the course through the glockenspiel ramp through the vinyl records tunnel and down the large sheet music. Hit it to make some beats! 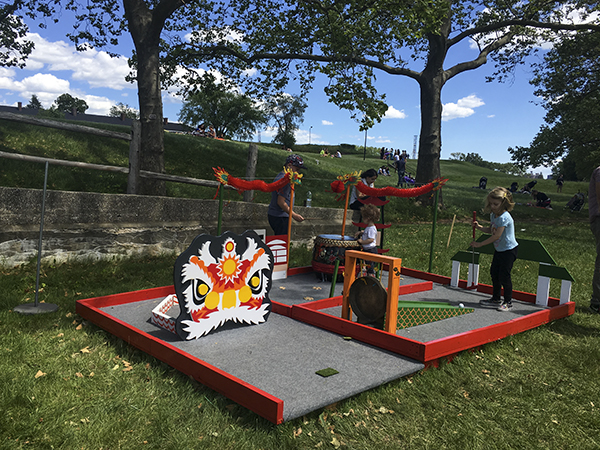 Welcome to Chinatown! Follow the lion dance troupe through this historic neighborhood. Bang and drum your way down Mott Street and end your journey under celebratory fireworks.