Welcome to 2014! We have a new mayor in our city for the first time in 12 years, and we now have an opportunity to re-evaluate and re-imagine what our city is all about. Artists have realized the New York City that exists in our imaginations through the populist medium of minigolf!

We've created a free artist-designed minigolf course on Governors Island (our seventh annual course!) that defines New York City at this critical moment in history. By all accounts, our city rose from the tragedy of September 11 to become greater than ever, but it seems true that, in all the progress we have made, some have been left behind. How can our city move forward in a way that provides opportunity for everyone, in which every voice is important and can be heard? Well, let's start with minigolf!

This year's theme is "New York City Now." Our artists have interpreted the theme literally, metaphorically, and with tons of poetic license. Our jury selected submissions based on: creativity, durability, playability, feasibility, adherence to theme, budget and community involvement.

As FIGMENT's mission is to build community through participatory art, we have found that artist-designed minigolf provides a great template on which artists can envision a creative framework in which others can interact. For the visitor to the island, minigolf provides a basic point of entry to participatory art: it’s easy for almost anyone to pick up a golf club, ball, and scorecard and interact with the art!

This course, one of a number of summer-long programs created by FIGMENT in addition to its weekend-long FIGMENT NYC event, has received a substantial amount of critical acclaim and media attention, and has delighted hundreds of thousands of visitors of all ages. Governors Island is located in the New York Harbor, approximately 1/2 mile from Lower Manhattan and 1/4 mile from Brooklyn. Its waterfront offers dramatic and impressive vistas of the New York skyline and New York Harbor, including the Statue of Liberty and Ellis Island. In 2003, the Island was opened to the public with the mission of serving as a cultural and educational location for all New Yorkers.

Please help us maintain the Minigolf course throughout the 2014 season by making a donation to FIGMENT! 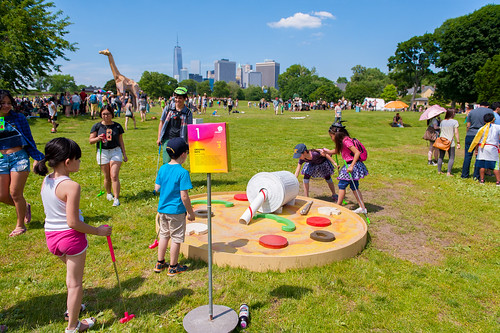 Pizza is a microcosm of New York itself. Sure, it’s made of common ingredients, but they combine to create something spectacular. It comes in any topping or style you can think of and can be adapted to suit any diet. It can be cheap or expensive, simple or extravagant, and you can get it at any hour of the day in all five boroughs.

This hole is a chance to play through a classic new york pie. Golfers can choose to go the long way to the hole by putting around the toppings, or take a chance on the skill shot -- putting up the soda straw ramp might land you a hole-in-one.

Crossroads of Communication by Tad Philipp and Pam Tucker

Originally the headquarters of The New York Times, the wedge-shaped building at the corner of 42nd Street and Broadway is wrapped by an electronic news ticker and topped by the New Years Eve ball. It represents NYC’s long-standing position at the crossroads of communication and technology. Covered from top to bottom with billboards just like the real thing, the minigolf version references NYC’s leadership in the digital revolution and promotes fun things to do on Governors Island. Players should aim for the center of the building’s base for a shot at a hole-in-one. 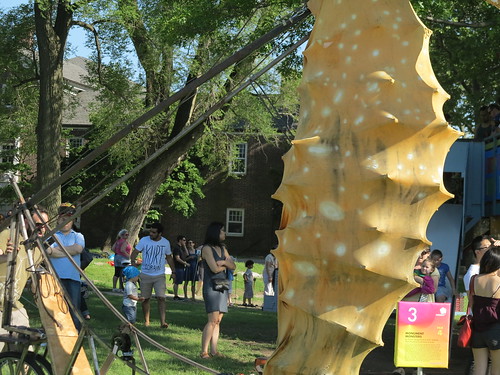 Just as citizens of New York give and take from the city, so do its buildings. Monumental Monsters represent the relationships New Yorkers have with the city’s architecture – great beasts that both help and hinder us as we navigate its gridded streets. Of course, so much comes down to our own attitude and perspective – if we treat these beasts as friends they will reciprocate with friendly gestures.

However, they may also become obstacles in your path. Either way, this hole is a great way to get to know the monsters as you squeeze through to take your next stroke. Our hope for this next stage of New York’s life is that it can open its arms in more inclusive ways to all of its citizens and visitors. Monumental Monsters embodies an optimistic attitude that sets the tone for this next chapter. 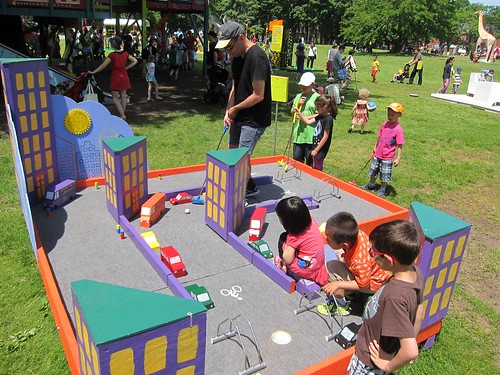 Biking has been popular in New York for years, but it was recently given a boost with the new bike share program. This hole looks at biking as a transportation option. So, you want to get from here to there and the subway is not an option. Do you take a car? Could be the fastest way to go, but traffic can change that in a hurry. Walk? There’s not much in your way except for your fellow pedestrians, but it may take longer to get there. What about a bike? A few more obstacles than pedestrians have to face, but avoid those and it’s definitely faster. And while a car could be even faster, you’re more likely to get hung up in traffic. All in all biking is a pleasant way to travel – this may be the way to go. 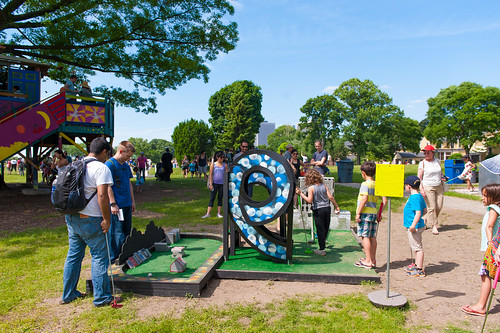 As we think of New York Now and look forward to how it should be, first we need to look back to Occupy at Zuccotti Park. We can look back at how the right to peaceably assemble ultimately came to an end.

In this par 4 hole, golfers will be able to Occupy Zuccotti Park once more, making their way to the General Assembly. But, they must resist the temptation to try for the second hole: an easy shot for the 1% into the Stock Exchange. 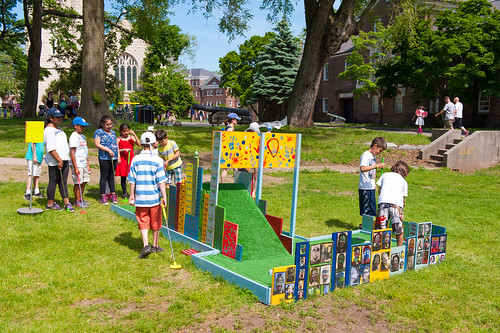 In "putting" Brownsville on NYC's minigolf map, we salute Brooklyn's young people for their creativity, courage and determination. As we all navigate through a New York City landscape framed by skyscrapers and public housing, brownstones and row houses, concrete and grass, we persevere in our journeys past various obstacles and we are
reminded that we are more alike than we are different. We all strive; we all seek the most direct path to our goal; we all revel in a hole-in-one.

Hoods and Woods by Vanessa Khouri 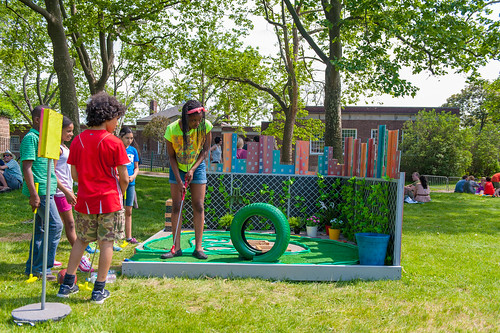 New York City! A magnificent visage of towering skyscrapers, restaurants, shops, bright lights, cars, and people and more people. But, there is another element that is increasingly becoming an important part of this image:­ urban/community gardens. These little verdant oases are popping up everywhere from rooftops to vacant plots to people's own backyard or windowsill. With a spike in eating local, eating healthy, and balancing chaos with simplicity, it is no surprise that New York City Now has over 1,000 registered community gardens. On this par 4 course players will "water" this minigolf representation of a New York City community garden, putting the ball through the loosely coiled garden hose to help maintain the garden bounty. 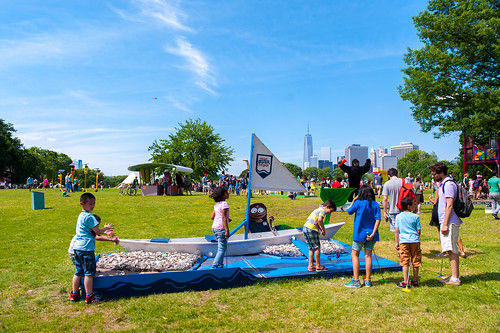 When players approach this scene, they will discover that a mischievous sea siren has caused the wreck of a small sloop on an oyster reef. Inside the boat, players will discover the role of the oyster in New York Harbor in the past, and how it will shape the future though our Billion Oyster Project. When they play the hole, the ball will travel through our oyster reef and into the hole in the boat that our sinister mermaid has caused. When players look over at the sign at our hole, they will be greeted by the logo of the Billion Oyster Project, which is a symbol of hope for the future of New York Harbor. By exploring our hole, players will learn all about how we at Harbor School are shaping the Harbor now by raising oysters in our aquaculture lab and planting oyster reefs. 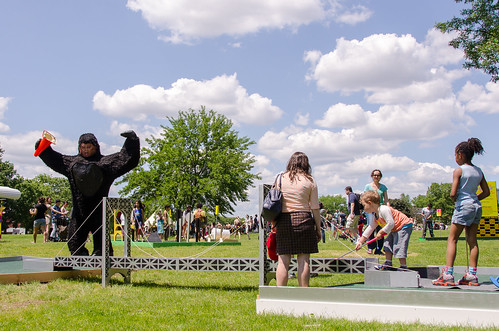 Leave it to a banana Republican to bring gorilla warfare into politics! King Kristy is on the loose and NYC’s infrastructure is under attack! Can you make it across the George Washington Bridge before he blocks your way with a traffic cone? Sink a hole-in-one to tell that big ape to stop monkeying around in traffic and leave our city in peace!

It is finally time to say goodbye to what once was, and hopefully, to what will not rear its ugly head again. It is time to move forward from the poor (to non-existent) response to emergency weather conditions, draconian policing policies, cheerleading and worship of the influx of “godsent” billionaires, and the shady, self-serving manipulation of term limits.

Join us as we say “Sayonara” to our nanny mayor, Rich Uncle Moneybags. Experience, for the last time, some of the worst examples of governing: make your way through the Stop & Frisk Forrest; attempt the Double Snowbank Bankshot; work your way through the Income Disparity Dread ; and shoot between the 3 legs of the Three Term Mayor.