FIGMENT’s sixth annual artist-designed Minigolf Course is a study in the State of the Art. This year, from dozens of submissions, we have selected a 9-hole course plus a bonus hole—each designed to challenge notions of art and progress and, above all, engage the public in aesthetic enjoyment. What is the state of the art according to our 2013 Minigolf Course artists? Is it always merely newer, faster, better? Does it bring the spirit of visionaries past into to the present with innovative or forward-thinking ideas and objects? Or is the phrase “state of the art” a relic, evoking a bygone age, that conjures breathless, outdated concepts of “the future”? Whichever your interpretation, in the FIGMENT 2013 Minigolf Course the innovative uses of technology, new and old, push the boundaries of minigolf while fostering riveting game play. So come and experience the state of the art in minigolf this summer and putt away on the Governors Island Parade Grounds!

The FIGMENT Minigolf Course will be free and open to the public during island opening hours on Saturdays, Sundays and holiday Mondays from June 8 through September 22, 2013. 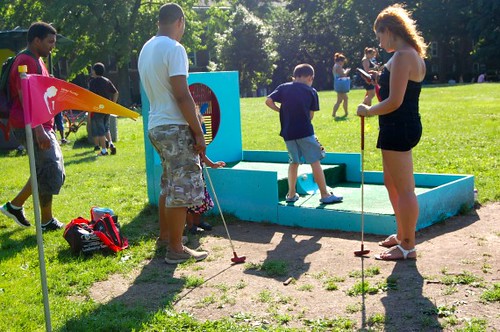 The term “state of the art” originated in the technology sector and was first used in a book about gas turbines.

This hole connects the origins of “state of the art” to its connotations of advanced development. Upsy-Turby‘s main component is a wheel that alludes to the shape and function of a turbine, and brings new possibilities to Mini Golf design: it elevates the golf ball from the hole’s lower level to its upper level. 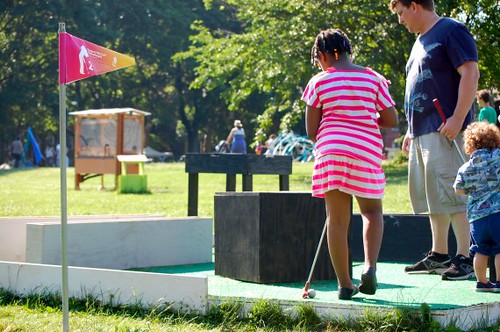 State of the art technologies are continually succeeded by the newer, faster, and better.

Throughout the rapid acceleration of computer development, the motherboard (its central nervous system) has remained a consistent element. Although smaller and more complex than previous incarnations, the contemporary motherboard is both a nod to the past and a driver of future technologies. This hole allows players to experience life inside a large-scale motherboard, as they navigate around a keyboard connector, RAM cache, battery, and fan. 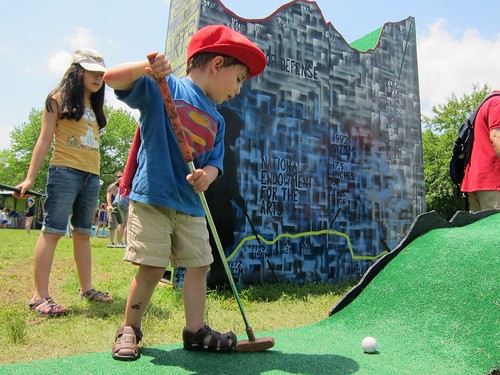 A juxtaposition of the state of the art(s’) funding with defense spending, in terms of the U.S. Federal Government.

The U.S. Government continues to fund arts endeavors through the National Endowment for the Arts (NEA), although its annual budget has dropped dramatically from its peak of $176 million. Meanwhile, Department of Defense (DoD) spending continues to grow, and recently reached an all-time high of $700 billion.
This hole represents the gap in government spending on the NEA vs. the DoD in physical form. Using a simple equation ($10 million spent = 1 inch of height), the artist created two distinct putting greens, placed side-by-side, to challenge golfers physically and intellectually. 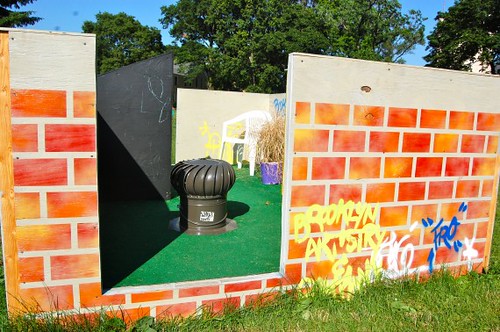 Innovation and change are signifiers for state of the art.

At this hole, players will step back in time to experience Minigolf’s glamorous past—a time when the likes of Fred Astaire graced New York City’s rooftop courses. Players will maneuver through quintessential obstacles found on NYC roof decks, such as vents, trees, tar buckets, pigeons and access doors. They will also be able to create their own chalk graffiti at this par 3 hole. 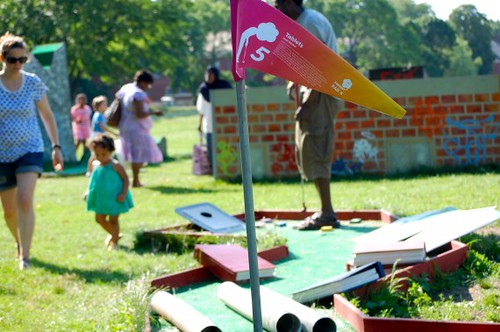 State of the art: the newest, most innovative gadget or device.

In our technology-obsessed culture, it’s easy to forget that what is now outdated was once “state of the art.” This hole serves as a timeline of the novel methodologies humans have used to share literary works over time—from stone tablets to scrolls, from printed books to tablet PCs. Tablets presents the reality that “state of the art” status is derived from improvements on the past. It displays the growth of humankind’s ability to touch ever-wider audiences through the written word. 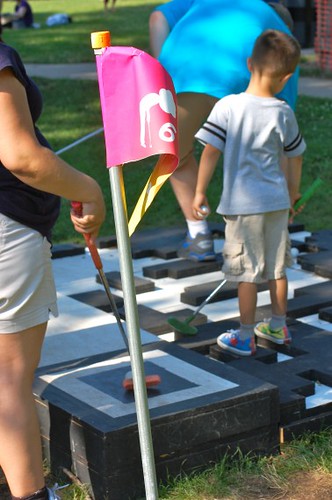 “State of the Art" implies that an object or idea is innovative or forward-thinking.

This hole references innovativeness through a Quick Response (QR) Code–like construction. A QR Code is a matrix bar code that encodes any type of data, and provides immediate readability and greater storage capacity than standard UPC bar codes. In this context, QR Codes reference our fast-paced lives and constant demand for better, faster technology. When players scan the Mini Gold Matrix QR code, they will be directed to statistical data that details their probability of making a hole in one, two or three putts.

#7 Centuries of FIGMENT by Keith Griffiths, with assistance from Dylan Griffiths and Emily Yuen 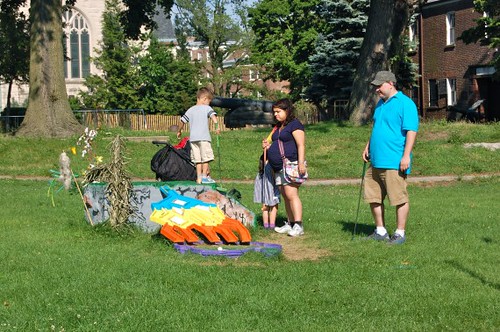 “State of the art” is mutable in meaning.

This golf hole is a journey through the history of art: from antiquity’s limited forms of expression to our multifaceted, multimedia age. When a player hits the ball, it will travel through the centuries – beginning with cave paintings—as art increases in diversity, complexity and reach. Just as art can suddenly change direction, the ball’s path is uncertain. Ultimately, the golfer will be returned to the beginning of a concept—to a figment of imagination. 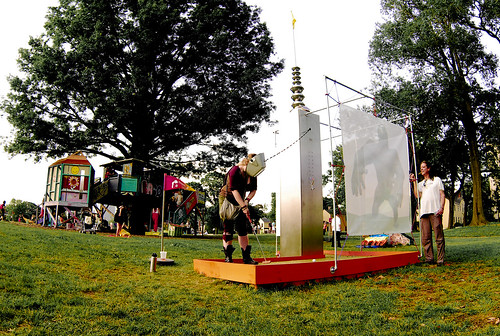 The phrase “state of the art” is a relic that evokes a bygone age, and conjures breathless, outdated concepts of “the future.”

Golf Adventures in the Third Dimension draws inspiration from the idea that “state of the art” is outmoded, and presents a technical vision that is firmly rooted in the 1950s. Each golfer will don a high-tech, augmented reality helmet that’ll transform the hole’s surface into a three-dimensional environment (and present obstacles that are visible only to the golfer). 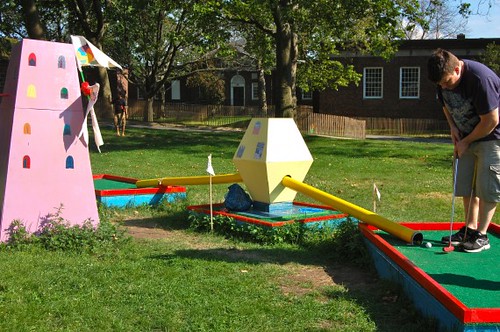 The term “state of the art” brings the spirit of visionaries past into to the present.

Harddrive Manor is a physical interpretation of the Internet. It incorporates today’s technology-driven expectations and yesterday’s imaginings of an innovative future. A giant orb, inspired by ’40s-era World’s Fairs, is found at the center of this hole. The orb floats in an artificial pool and is attached to a towering spire, around which hybrid half-human/half-machine characters spin. The artist enjoys imagining that there are makeshift, manual contraptions that operate in a cartoonish style, behind every groundbreaking technological innovation. Here, her daydreams are brought to life. 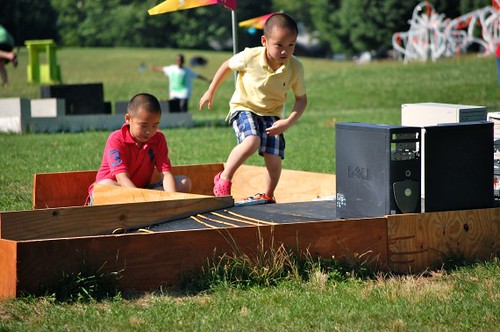 The Oxford English Dictionary defines “state of the art” as the “most recent stage in the development of a product, incorporating the newest ideas and the most up-to-date features.”

With technological advancement, the lifespan of the “state of the art” has shortened dramatically: yesterday’s Avant-Garde is today’s trash. Yesterday’s Past was designed with this reality in mind. Salvaged computer scraps—old keyboards, shells of computer towers and power cords—create paths and obstacles. Through this putting process, the obsolete is renewed.

Please help us realize our FIGMENT Minigolf Course this summer by making a donation to FIGMENT.