Remember, back in the day when you’d spend hours and hours in the dark womb of the Arcade? Round kicking your day away, dodging ghosts while eating magic pills, and saving the world from inevitable asteroid destruction. Sandwiched between two fluorescent lit store fronts in almost every strip mall across America is that thrilling murky area offering hours of entertainment to idle teenagers and nostalgia-seeking adults alike. At first it is just the sounds seeping into the spacious corridor that draw you in, but then the lights, smells, and the sounds of defeat and victory tighten their grip until you enter…

Out of dozens of submissions, FIGMENT selected 8 all new, and one returning, amazingly creative minigolf hole designs that, pending funding, will find a temporary home on Governors Island. On the 2012 FIGMENT Minigolf Course, prepare yourself to simply be sucked into the vortex of the arcade. Our fifth FIGMENT Minigolf Course will be open and FREE for the public to enjoy while the island is open on Saturdays, Sundays and holiday Mondays from June 9 through September 23, 2012.

Please help us realize our Minigolf Course this summer by making a donation to FIGMENT.

Click on an image to find the high-res version! 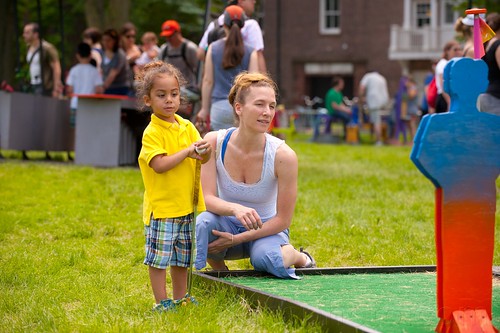 Inside the arcade, your eyes search the room for your favorite game, or just one that is momentarily vacant, and land on the one in the corner peaking above tousled hair-dos that for mere quarters you know will bring that wanted surge of adrenaline. Coolly shuffling between occupants and their belongings across the matted industrial carpet, you arrive at the console that eventually swallows the quarters that weighed down your pockets; and, for a few minutes or hours, offers you excitement that can only be felt at the arcade. 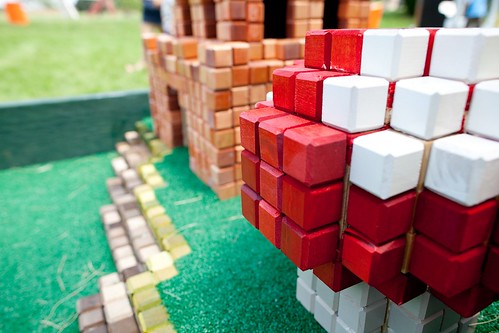 You’ve grown several sizes too big! (Maybe you ate a mushroom.) Now you’ll have to guide a golf ball through the level in your place. In this world of 3D pixels, you can take any of three paths to the endgame: stay above ground to play it safe, sidestepping hills and ‘shrooms; risk the bridge and head straight through the castle; or jump in the lake and take the tunnel to the other side. But is your princess in another castle?
Special thanks to Tim Corbett, Carly Leinheiser, Jesse Green, and everyone else who helped with this project! 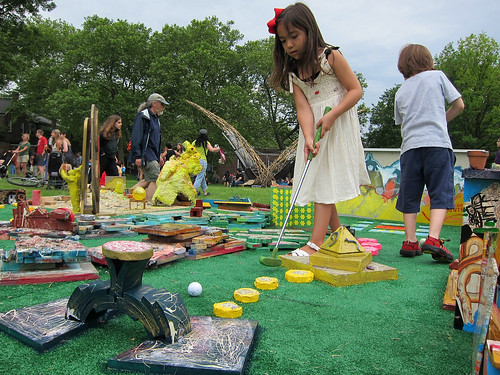 Players maneuver their golf balls through historical spans of time, past obstacles based on City & Country School’s Social Studies scope. Using cultures, histories and geographies, students’ hands-on learning experiences are represented as arcade aspects of the piece, combining the non-sequential pinball game format and the school’s experiential hands-on learning philosophy. Not unlike the unpredictable game-play of a pinball game, education’s most relevant challenges allow us to build consensus around the defining principles of nurturing and supporting students’ natural curiosity and innate desire to win with life-long learning. 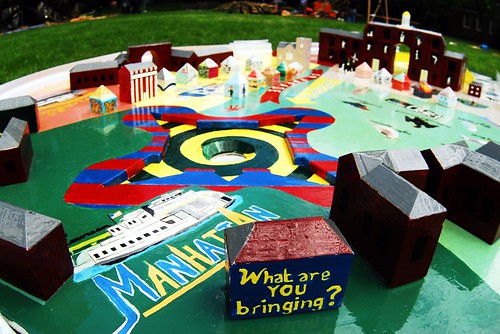 This pinball-inspired model of Governors Island offers almost as many routes as the real island does, and is perfect for armchair explorers or those seeking a new road. Sample the history that surrounds you as well as the birds, fish, and trees that inhabit this unique urban ecosystem. Aim for the swirling star of Fort Jay, or shoot at the ferries if you are ready to go home. Real duffers can try sinking the ball in the nearly impossible Castle Williams. Putters only, please — Golfernor’s Island works best with a light touch. Congratulations — you’ve just been appointed golfernor! 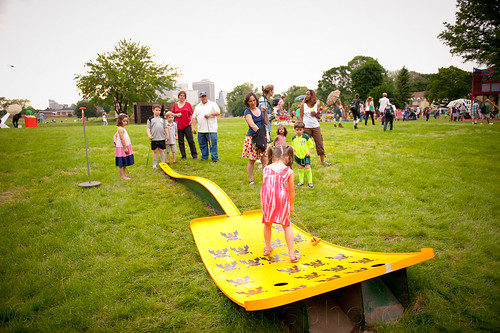 Both an over-sized icon of pest-ridding technology and a contraption large enough to be turned against the player, A Very Fly Swatter contemplates the artillery and strategy present in traditional arcade games. What happens when our weapons grow beyond of our control? What will your strategy be for sinking this putt?

#6 Hit The Clown by Keith Griffiths, assisted by Emily Yuen 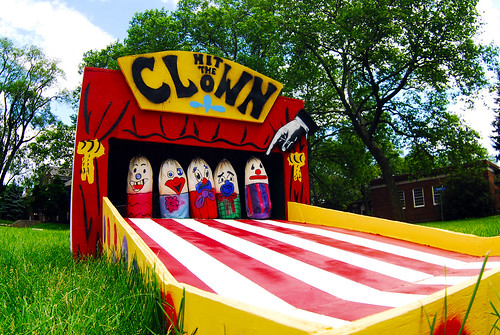 We all have had many fun experiences at the carnival, stumbling upon the ever-so-difficult “Whack-A-Clown”, where we must throw a ball to knock down stuffed clowns for a rewarding prize. The game sounds easy, but is nearly impossible to win when faced against it. For this minigolf hole, the player must hit their golf ball past one of the clowns in order to get to the end hole. Hitting a desired clown does not necessarily mean a win; it is a total game of chance. After hitting a clown, the ball rolls onto the putting green. 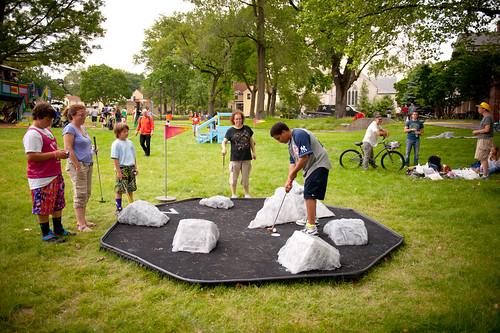 Asteroids•Turf takes as its inspiration both the Atari arcade game “Asteroids” and space junk, the collection of man-made objects, including defunct satellites, rocket dust, astronaut apparel, and even a camera that orbits the earth. The player enters a circular asteroid belt. Aiming for the center hole, the minigolfer must avoid obstacles including spaceships, asteroids, and other miscellaneous debris. 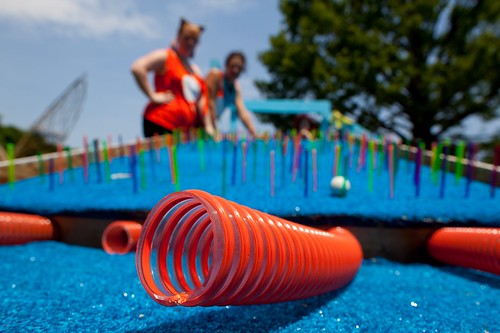 Designed by Blue School 2nd Grade Class (facilitated by Jess Hooks, Mahayana Landowne, and Lauren Monaco), Pachinko Kablam-o is a pegboard with various brightly colored obstacles: pegs, volcanoes, wheels, tubes, holes, and flippers. Pachinko is a game played throughout the world in arcades. By using gravity the ball bounces around the obstacles until it lands on the putting green. Special thanks to Brett Renari, Ashley Hughes, and Chris Niederer. 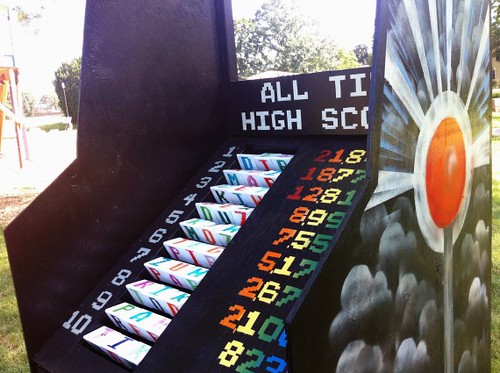 The best of arcade adventures end with you leaving a mark: you have a chance, if you do well enough, to put your initials on the high score board. Only three letters to let everyone know that you were there, and you rocked that game. Sometimes those three letters are cheeky, but for the most part they are unique and personal. You keep an eye on them, and if need be, you will defend them if they move from their ranking. But at all times they are a reminder telling everyone that you were there.

Please help us realize our Minigolf Course this summer by making a donation to FIGMENT.

The FIGMENT 2012 Season Long Minigolf Course was curated by Jacquie Stryker, with help from a 7-person jury, and the entire FIGMENT NY team.