“That’s not a bug! It’s a feature!”
— Unattributed quote from a computer programmer, first found in print in 1981.

The FIGMENT Minigolf Course has returned in 2011 with 14 holes: twelve new ones and an encore of two of our favorite holes from previous years. This year, the course is built around Bugs and Features, in the broadest sense of the word. We love bugs – and not just because approximately 80% of the known animal species on earth are members of the phylum Arthropoda, which includes insects, arachnids, crustaceans, and other “bugs”.
FIGMENT is giving its own participatory, free and inspired twist to the unknown and fascinating world of bugs – of both the creepy crawly and the technological variety. The FIGMENT Minigolf Course wishes to share our fascination by the way that “bugs” make our skin crawl, but at the same time live among us symbiotically, and can be helpful in keeping our world in balance. We hope to provide a place for wonder and dialogue, and an environment where man and bug can putt away in harmony.

Please help us maintain these projects this summer by making a donation to FIGMENT.

#1 The Spider Hole by Anton Plano assisted by Lila Cardell 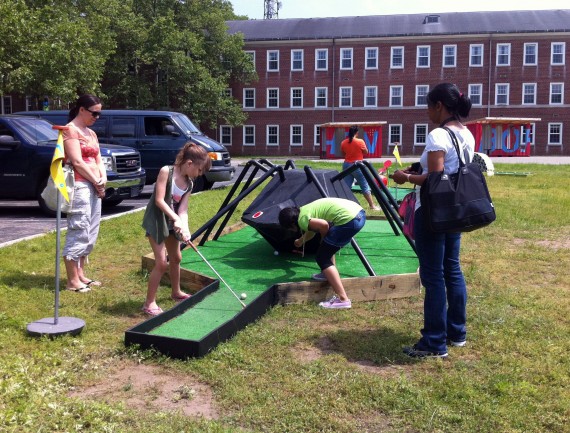 At The Spider Hole one plays the ball under or around the legs of a centrally located spider who is “protecting” his turf. Many insects are considered menacing or dangerous while they actually do much good, such as pollinating and eating other insects that harm plants. The only thing people have to fear on this spider is not making par. 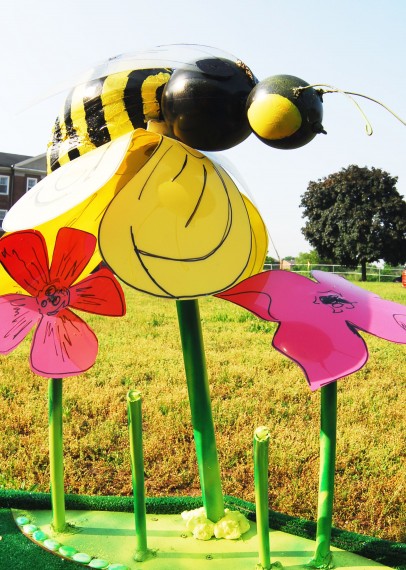 Come take a stroll through your average backyard and encounter some of the small neighbors dwelling there. As you shrink down to see them at their height, you will face a beautiful butterfly, a busy bee, a Zen snail, a sensuous centipede, and lastly you will come face to face with a fearsome spider. This hole takes you on a mini adventure in a place you would never think to find. Have fun but beware!

#3 ⌘ B by Samuel Sherman and Jacquelyn Strycker 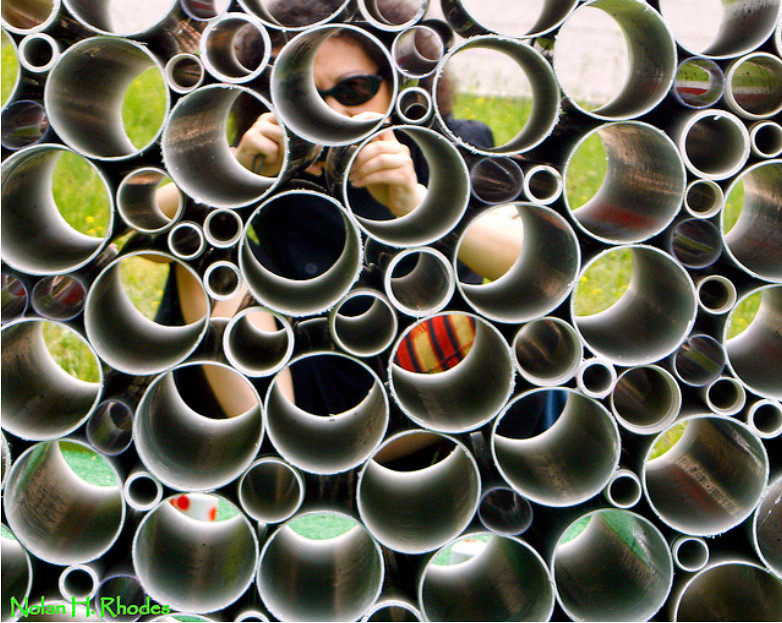 This pvc pipe hive takes as its inspiration both the classic Donkey Kong 3 arcade game and the honeycomb prisms built by bees. 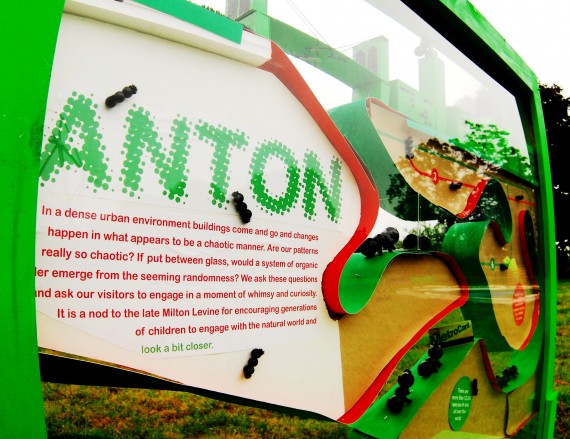 In a dense urban environment buildings come and go and changes happen in what appears to be a chaotic manner. Are our patterns really so chaotic? If put between glass, would a system of organic order emerge from the seeming randomness? We ask these questions and ask our visitors to engage in a moment of whimsy and curiosity. We also nod to the late Milton Levine for encouraging generations of children to engage with the natural world and look a bit closer. 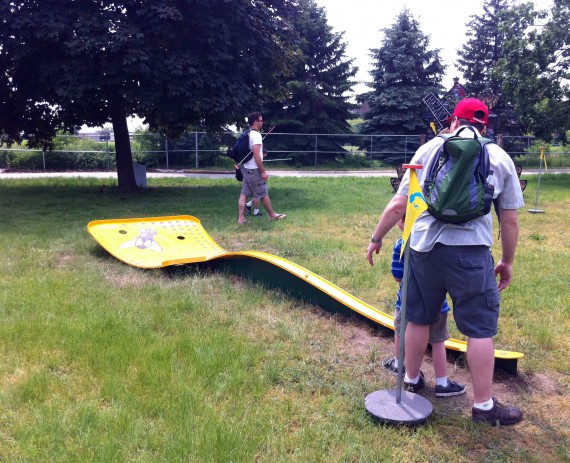 This is A Very Fly Swatter. On one hand it’s an oversized icon of pest-ridding technology. On the other – it’s a contraption large enough to be turned against its creator. What happens when our weapons grow beyond of our control? Something to contemplate or ignore while you enjoy putting this hole. Oh, and hope you brought some bug spray! 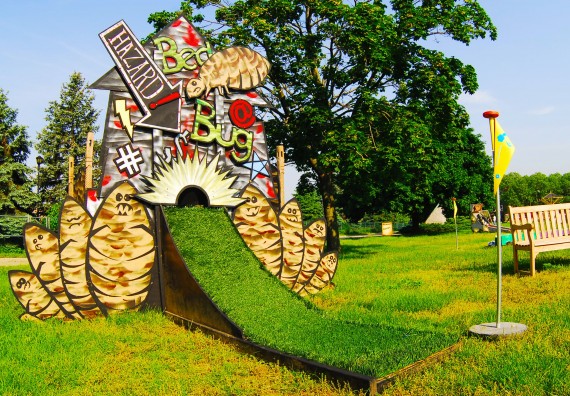 Have you ever seen the frustration of a professional golfer stuck in a sand trap, pathetically trying to hit his ball back into play?! If you ever had Bed Bugs, you certainly know how he feels! With this tribute to that pit of sandy menace, we present Bed Bug Hazard! Spend a frustrating afternoon ridding your bed of this tenacious vermin! Bed Bug Hazard will be sure to disappoint and confound those who are frantically caught in its overwhelming annoyance! Just when you thought the ball was back in play, guess again and take another look into Bed Bug Hazard! 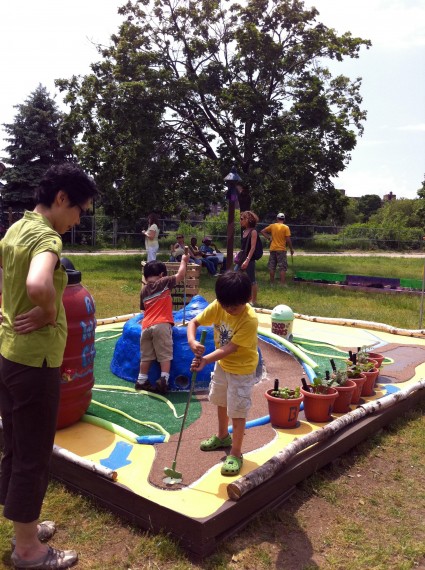 The multitudinous microorganisms and itty bitty critter friends all over and around us can also process our food waste. They help make nutritious soil for food deliciousness. This golf hole is a 3 step compost system for soil building and food growing. The cycle is powered by the likes of such characters as beneficial microbes, fungi, worms, bees, lady bugs and the snail, a mollusk, which helps aggregate the soil. These workers help turn organic waste into the best fertilizer for free! Together with bugs and microbes, we are rebuilding our topsoil, making soil richer and our food tastier.

#8 All Stretched Out by Katz Family 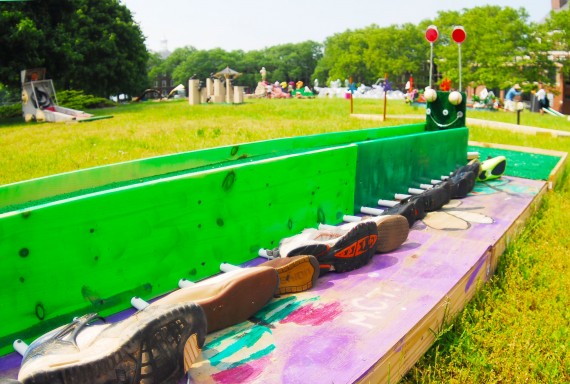 Our Centipede was inching along Division Road one day late spring, when it passed a Minigolf Course which was under construction at the time. Pausing to observe, he found an enormous beach towel and decided to take a nap. He barely finished untying all 100 of his shoes when he fell into a deep sleep and it doesn’t look like he’ll be awakening until mid-fall. That’s how he became hole #8. 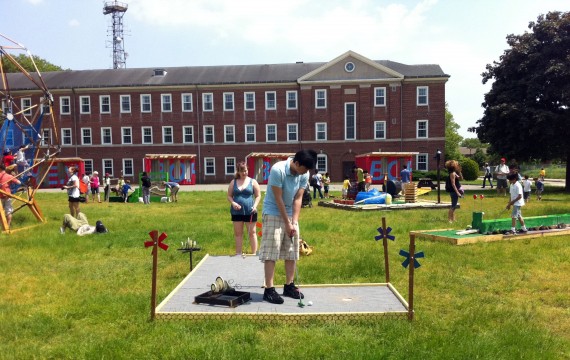 This minigolf hole draws whimsical inspiration from a bee-friendly garden on a summer afternoon. Utilizing available re-purposed materials from Build It Green NYC and Materials for the Arts, Bee-ware’s Par 3 will leave you buzzing. 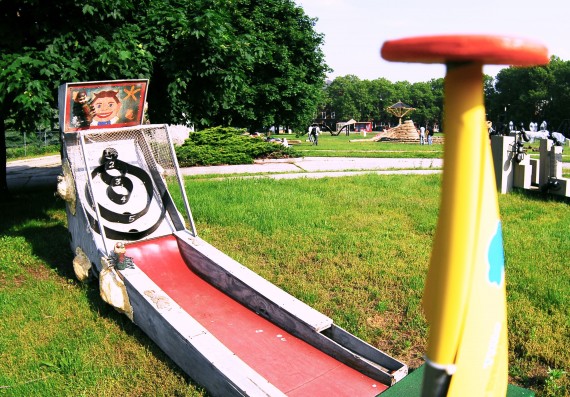 In this unusual situation, a colony of insects has nested on an old Skee-Ball game, originally from Coney Island, having mistaken the face of its cheery mascot Tillie for their queen. We may have an infestation on our hands. 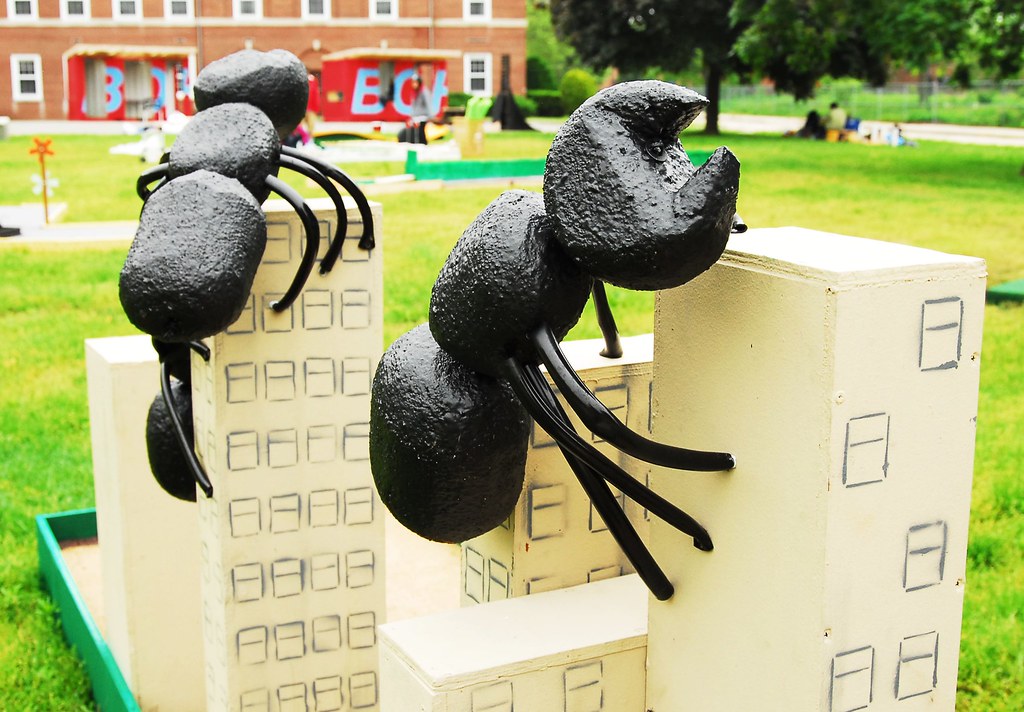 The Ant Farm. An American cultural icon of bug related imagery. The people’s terrarium. The nature lover’s TV. This hole presents New York City as an oversized ant colony, with everybody hurrying into similar directions, working towards common goals, and sometimes carrying seemingly unbearable loads. Ant Farm uses metaphor to create an implied narrative, an insight into society. We aren’t all that different from bugs after all. 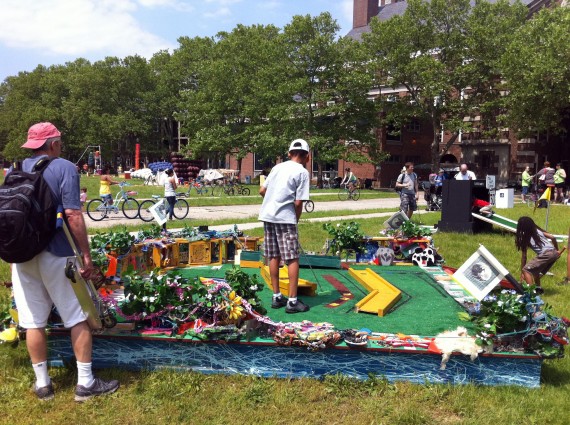 Flea Circuity Circus players maneuver their golf ball through a maze of motherboard obstacles and spinning binary code inspired by Alexander Calder’s legendary found object circus made for the young at heart. Flea Circuity Circus visually and physically promotes biosensitivity as well as expresses the inherent bugginess of technology. 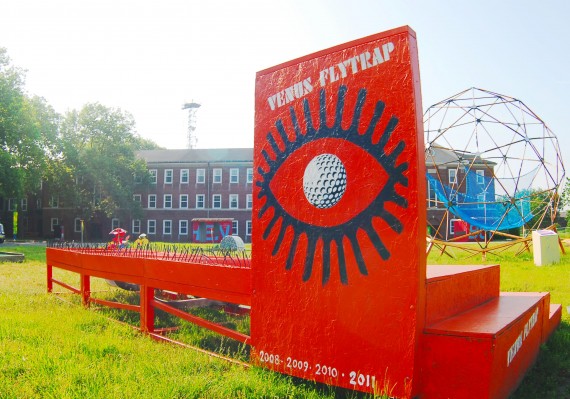 Dionaea muscipula is a carnivorous plant that catches and digests animal prey (mostly insects and arachnids). The trapping structure is formed by the terminal portion of each of the plant’s leaves. The plant’s common name refers to Venus, the Roman goddess of love… Who has promised you that all your dreams will be sweet?

#14 The Golf Channel by Emily Tomasik and Michael Oshins 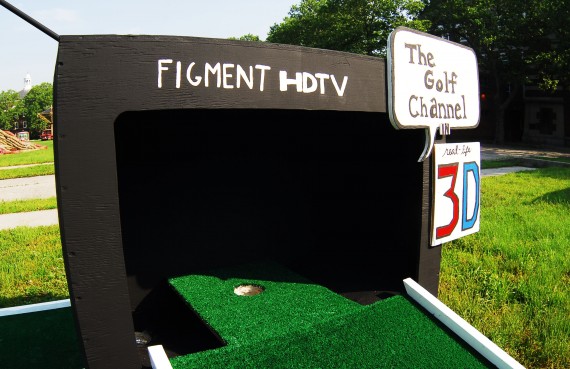 The Golf Channel is not on TV. It’s at Governors Island, mixing current themes of perception and choice into a challenging mini golf hole. One of the three holes in the TV will lead you through the outlet plug to a hole-in-one, the other two holes will leave you in overgrown turf, fighting your way to the final hole.