The FIGMENT Mini-Golf Course has returned in 2010 with 11 holes: nine new ones and an encore of two of our favorite holes from previous years. This year, the course is built around a World’s Fair theme – once the platform where the state of the art in science, technology and issues of humankind from around the world were brought together. FIGMENT is giving its own participatory, free and inspired twist to a tradition of world exhibitions held all over the world for 160 years and counting. Like the early World’s Fairs, the FIGMENT Mini-Golf Course wishes to provide the world with the hope of a better future, by building a stronger community, providing a place for both introspection and dialogue, and the exchange of solutions. The FIGMENT Mini-Golf Course will be open for the public to engage with at no cost while the island is open, on Fridays from 10-4pm, Saturdays from 10-6pm, and Sundays from 10-6pm, from June 11 to October 3.

Please help us maintain these projects this summer by making a donation to FIGMENT. 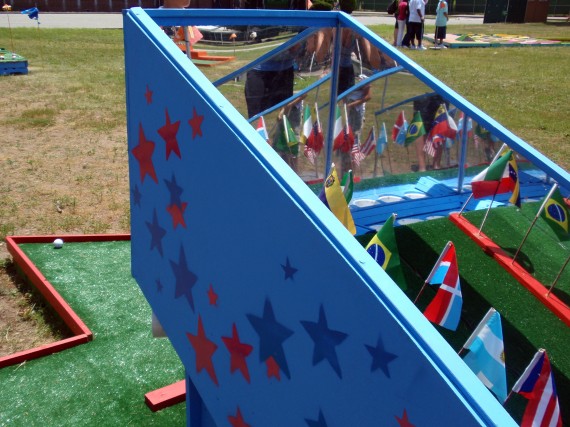 No trip to the World’s Fair is complete without a visit to the Hall of Nations showcasing flags from all of the nations represented within the grounds. Hall of Nations is designed to allow players to explore optics and have fun at the same time. It uses mirrors to create the optical illusion of infinite flags. 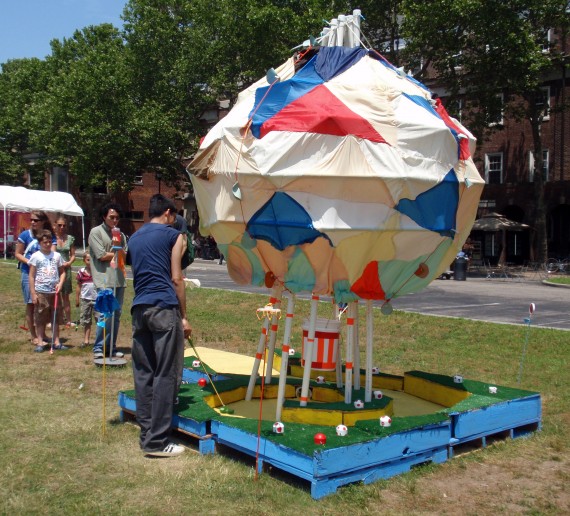 The hot air balloon rides and Midway of the Chicago Columbian Exposition in 1893 inspired L. Frank Baum’s The Wonderful Wizard of Oz. Our mini-golf hole, in turn, also takes these elements as its inspiration. A spiraling yellow turf leads to the hole located beneath the basket of a hot air balloon. The balloon is made from recycled umbrellas and fabric that stretch across an infrastructure of bent tubular steel. The flowers that surround the perimeter of the hole are reminiscent of the story’s poppy fields. 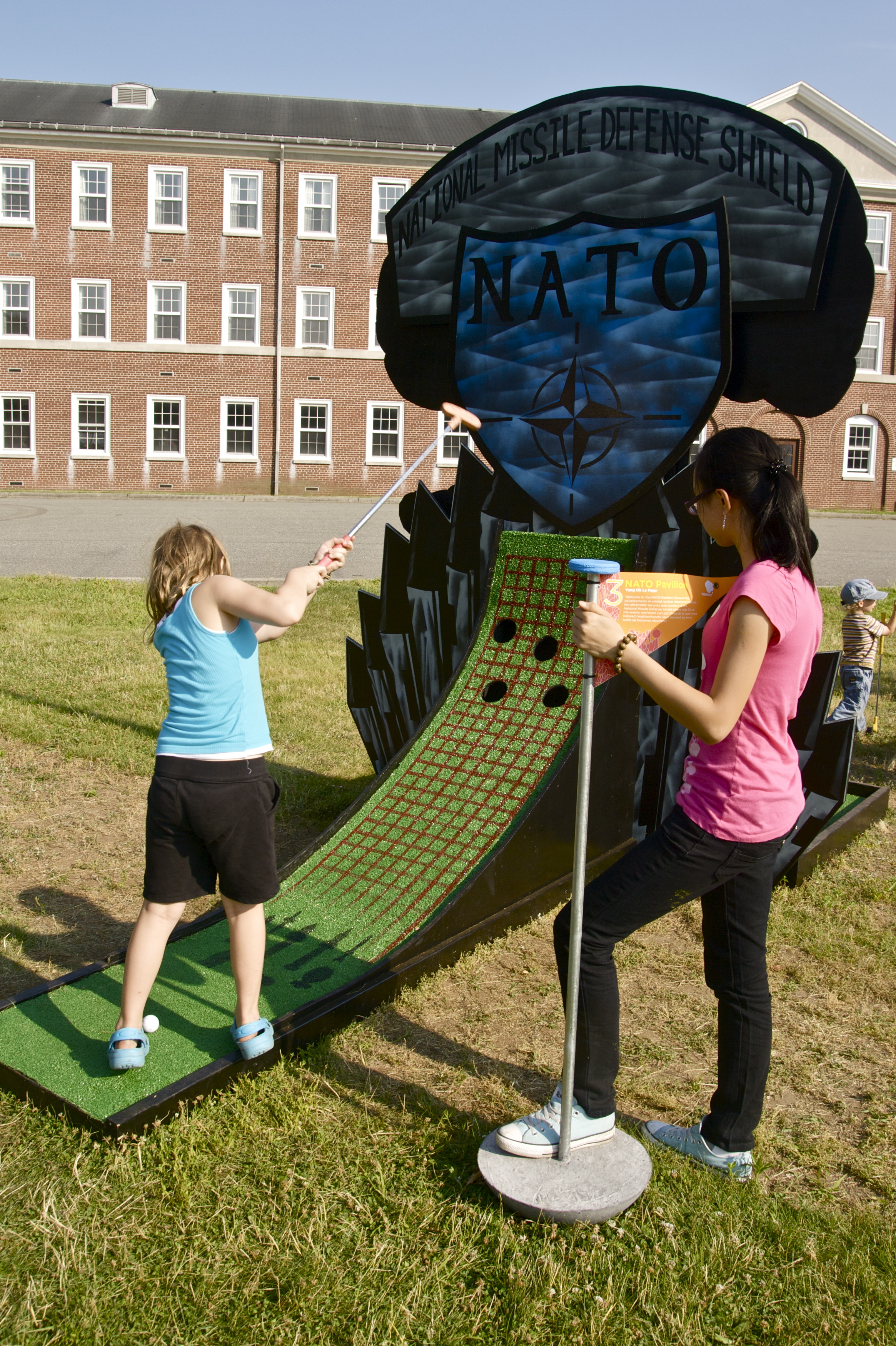 ‘Welcome to the NATO Pavilion! Discover the advancements in orbital nuclear deterrents! Behold the obtainable security and comfort of the National Missile Defense Shield where only 5% of the enemy warheads can get through to your most beloved neighborhoods! Rest assured as arms build-up becomes obsolete!’

#4 BOT by Debra Jenks, Norma Markley and An Pham 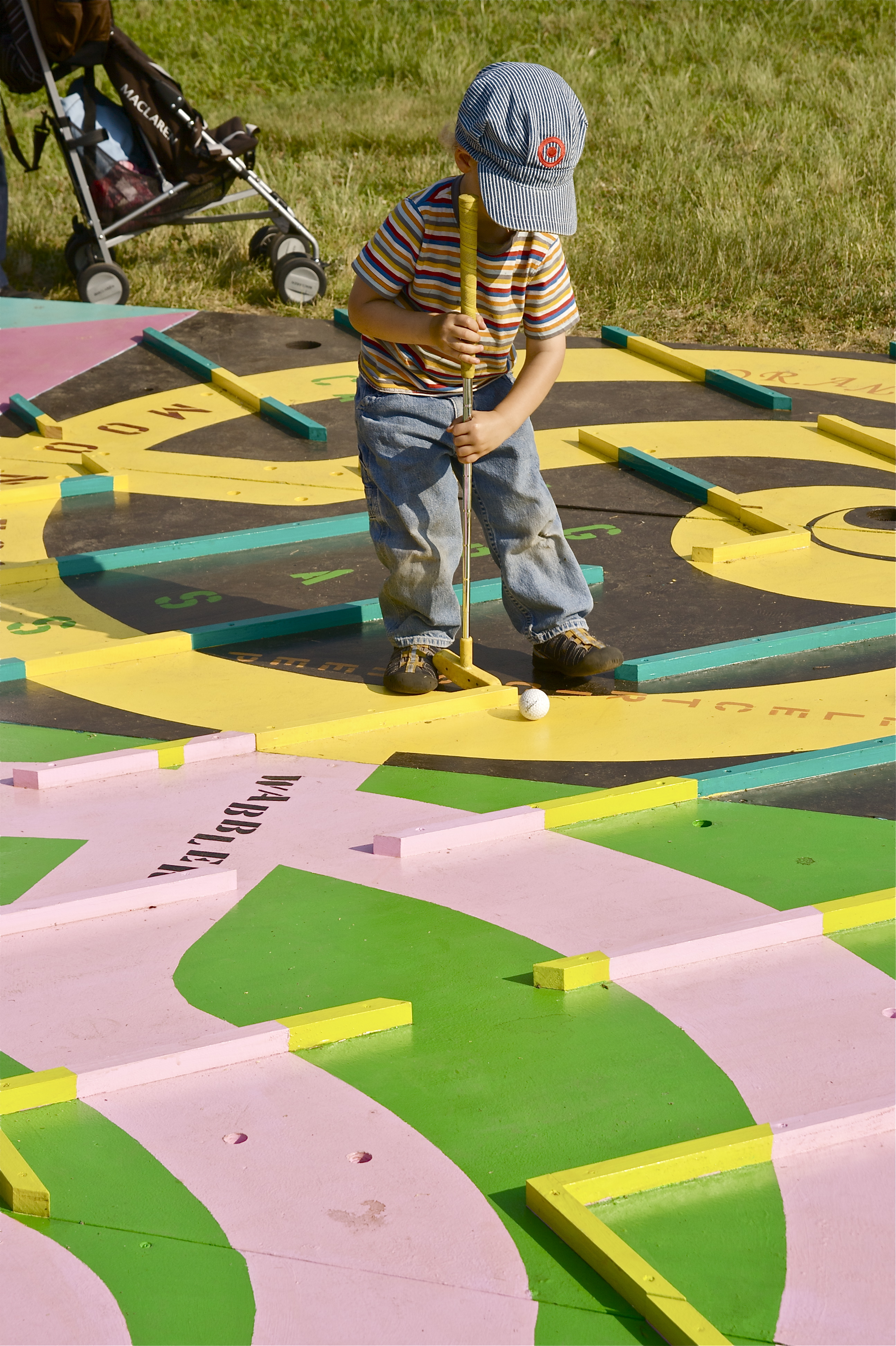 This hole uses the guidebook cover for the 1968 World’s Fair in San Antonio as the springboard for its design. The design also reflects the artists’ interests in working with text-based images and books. BOT is a play on the fantastic and futuristic characteristic of the Hemisfair, and of the art and architecture of that period (i.e. the Atomium in Brussels, Op Art, Early Stella, etc.). The hole is also a comical guide or map of sorts of different pavilions one might find at a World’s Fair. 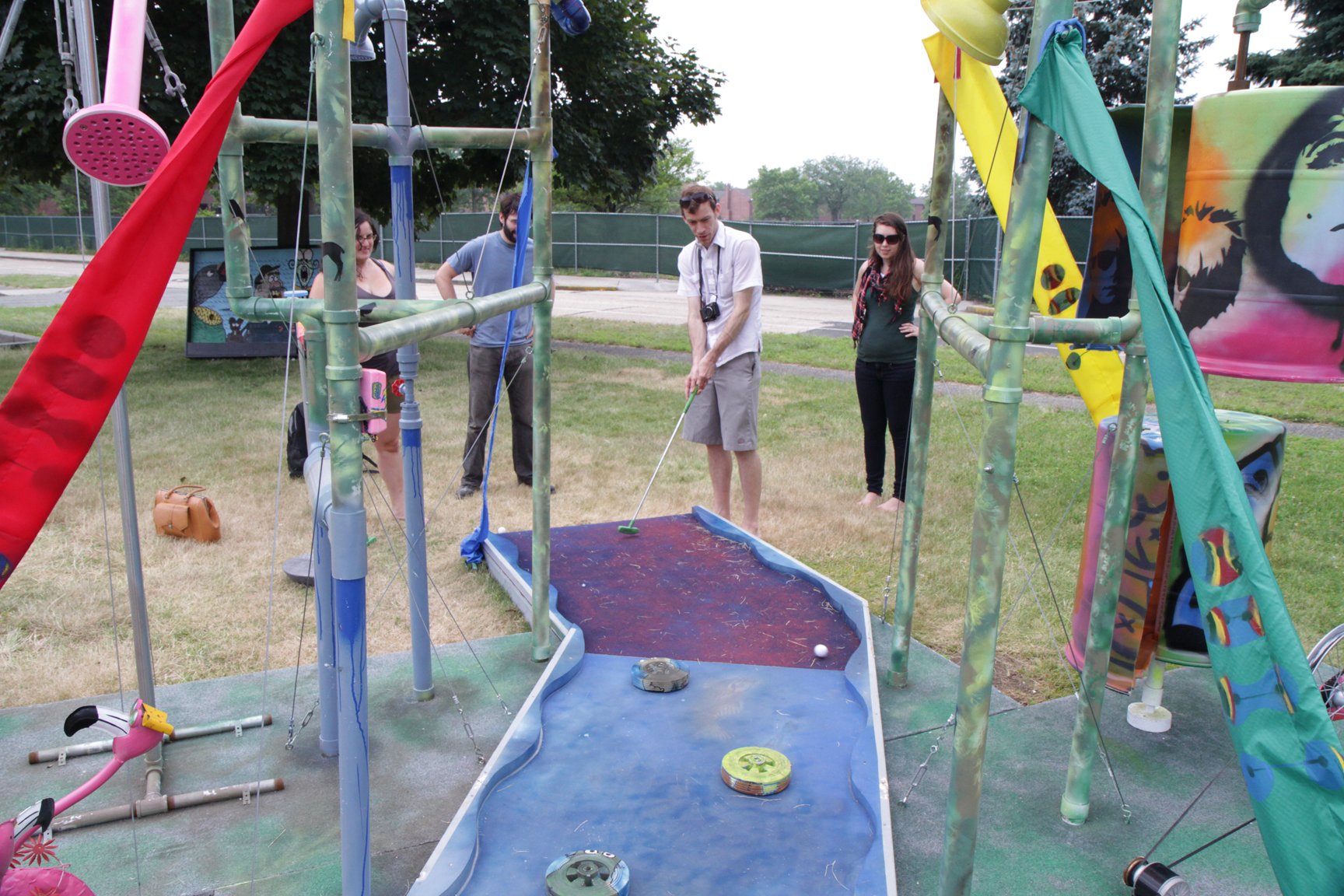 The 2008 World’s Fair in Zarazoga, Spain focused on ‘Water and Sustainable Development’. Sociologist Victor Viñuales presented ‘a toolkit for the builders of change’ and a call to action in response to the world’s struggle regarding sustainability: ‘just dreaming is not enough.’ This hole both thematically explores and uses alternative energy sources on a small scale. Just Dreaming Is Not Enough reminds us of our responsibility toward worldwide development of a carbon-neutral footprint, in the context of an interactive experience.

#6 The Golf Between Us Is Small by City and Country School with Maggie Ens, Kathryn O’Connor, Ian Klapper, and Jimm Meloy 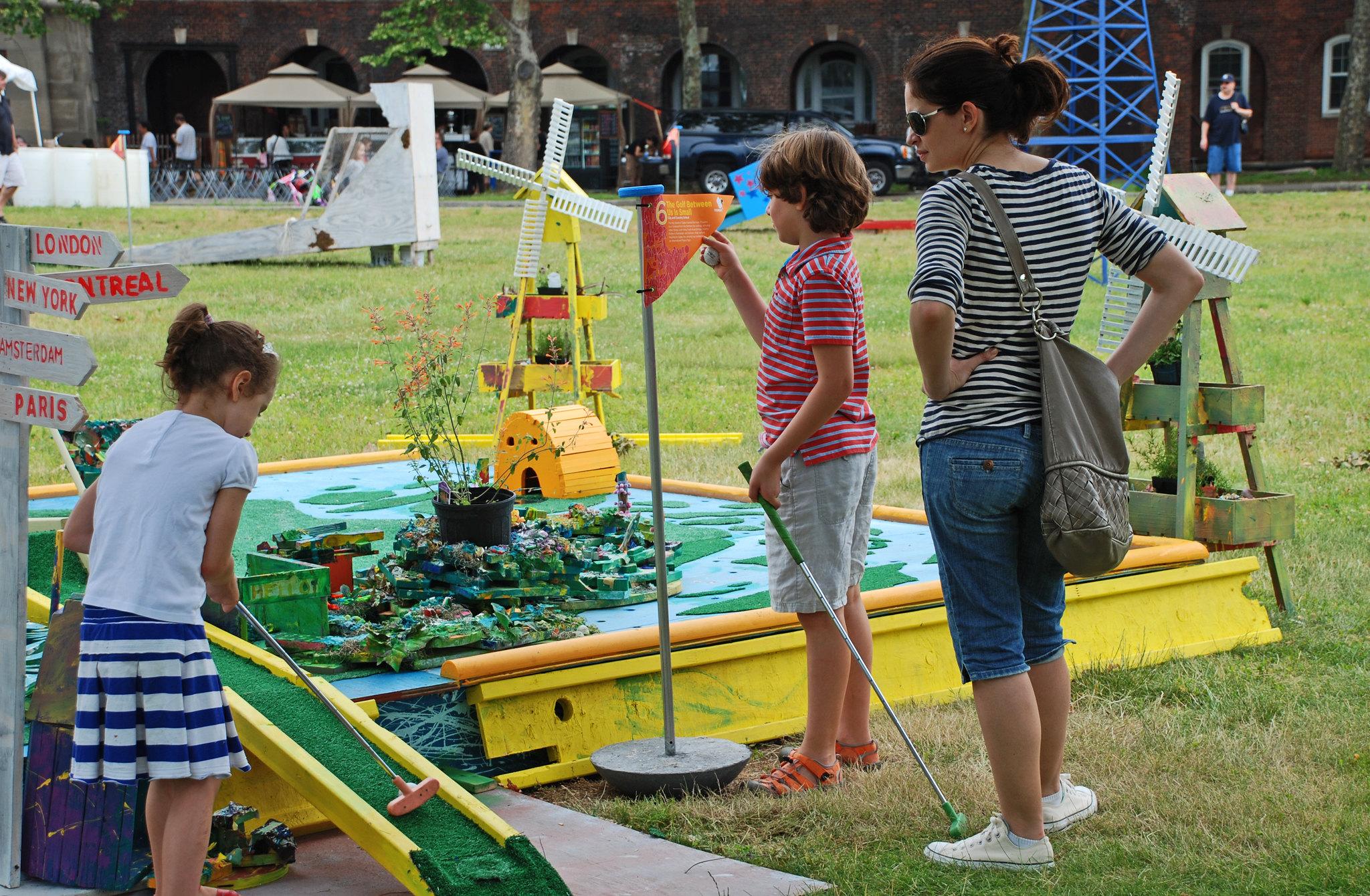 The tiny Scottish island of Gigha inspired The Golf Between Us Is Small. Gigha’s first community-owned wind farm in Scotland, its gorgeous gardens and golf course mirror FIGMENT on Governors Island, bringing art and nature-lovers together to create something wonderful for everyone! Players tour Scotland from the Northern tip visiting, among other things, Loch Ness (see Nessie!), Forth Road Bridge, Harry Potter in Edinburgh and Hadrian’s Wall, before heading to Gigha, the winning cup marked by an international Peace Sign. 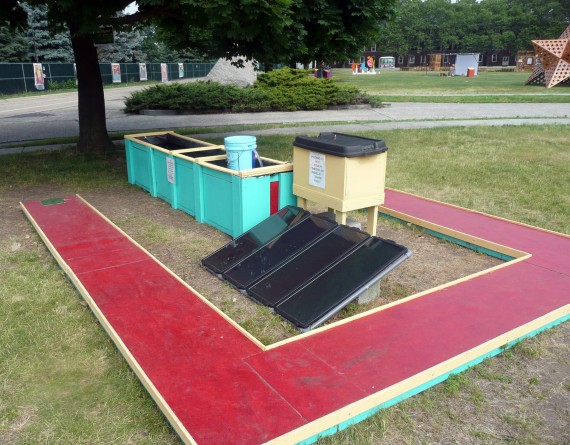 Billy Rose’s Aquacade had its most successful run at the 1939 New York World’s Fair. Aquaponics is the combination of aquaculture and hydroponic agriculture in a sustainable balanced system and may be one solution to solving world hunger and energy problems. Like the performers in Billy’s Aquacade, the fish in Noel Rose’s Aquaponicade are here to move about beautifully in the main swimming pool, but they also produce waste that feeds the plants. Using a gravity driven surge system, the fountains in Noel Rose’s Aquaponicade help to aerate the system and provide oxygen to the fish.

#8 The Game Players of FIGMENT by Build it Green 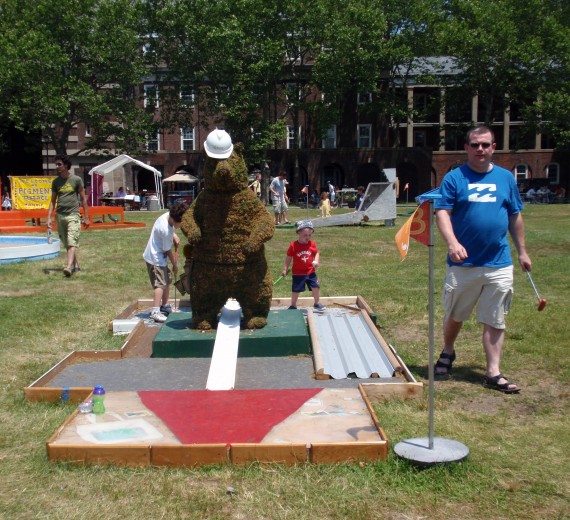 What is the ‘World’? What does it mean to represent the world in the framework of an expo? The pomposity of the question is not equal to the pomposity of the concept. And the event, too. But, probably not as much fun either. So, in the spirit of fun, which means ‘to forget’ in some language I am sure, LET’S PLAY SOM PUTT-PUTT! 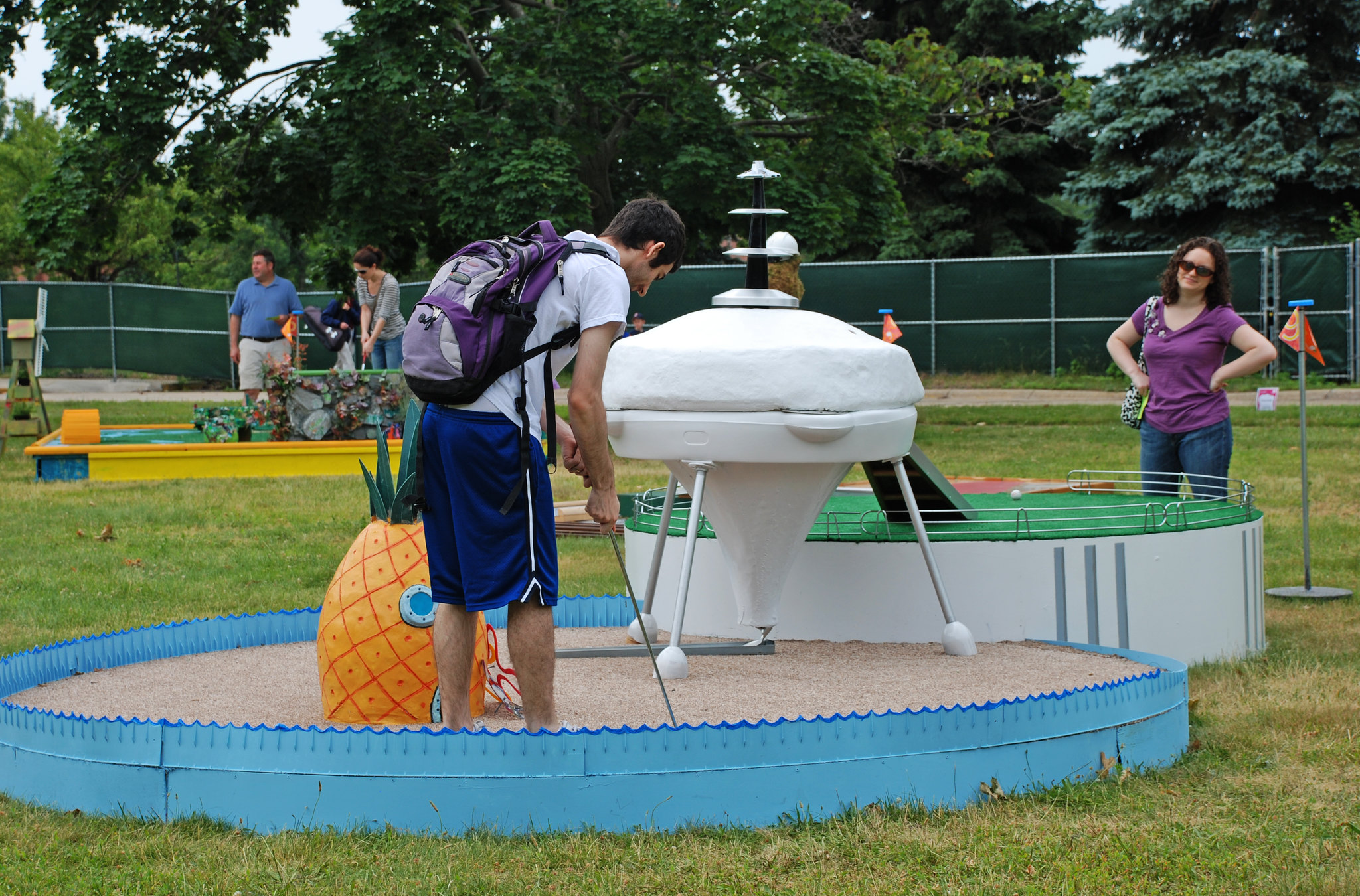 The General Motors ‘futurama’ pavilion at the 1964 World’s Fair in New York depicted life in the future as an underwater world, visiting the luxury resort ‘Hotel Atlantis’. 46 years later, we are not living on the ocean floor, and GM’s vision has spawned only one ocean community: Bikini Bottom – the make-believe town of the animation SpongeBob. While we didn’t achieve the Hotel Atlantis, trying brought us pretty close to Armageddon. Hotel Atlantis at Bikini Bottom takes you back in time and replaces the distorted 1964 World’s Fair vision with a harmless cartoon future. 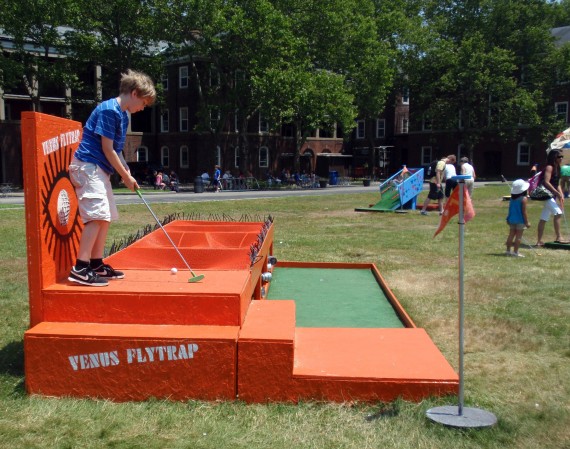 Dionaea muscipula is a carnivorous plant that catches and digests animal prey (mostly insects and arachnids). The trapping structure is formed by the terminal portion of each of the plant’s leaves. The plant’s common name refers to Venus, the Roman goddess of love… Who has promised you that all your dreams will be sweet? 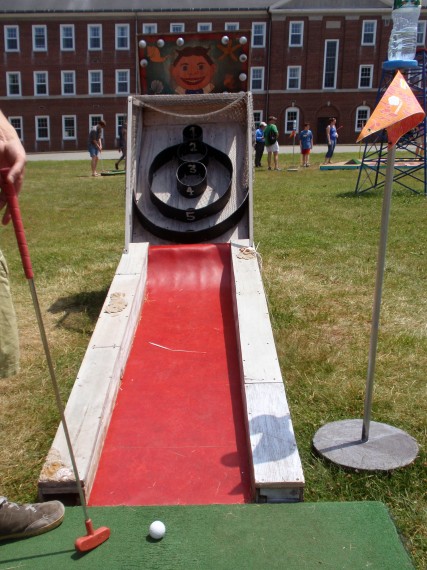 A relic of the once famous Coney Island Astroland gets repurposed for a new life on Governor’s Island. This hole takes the form of an old skeeball machine ravaged by time and in the process of being reclaimed by the earth. Turning the old scoring method on its ear, this time players try to score the least they can. The color scheme and imagery is inspired by Asbury Park, New Jersey’s Tillie and old photos from Coney Island, New York.