This year, we’ve expanded the course to 18 holes, each designed by a different artist or group of artists. The designs are visually stunning and wildly innovative, and designed to be fun – not frustrating – for players of all ages.

The course is totally FREE and open to the public on Fridays, Saturdays and Sundays while Governors Island is open, from FIGMENT on June 12 to October 4, 2009..

Astral Carpet Lounge by Disorient with special thanks to Studio Uma

The Astral Carpet Lounge is a place for communal dreaming. It facilitates social reclining when its tessellated seating topographies face each other. It creates a faceted “Magic Circle” to share ideas, inspirations, and dreams. It is an open space to daydream and even doze without risking a ticket. With government challenging our right to gather, our retreat to virtual networks to re-tribalize our society has fittingly catalyzed this geographical art comeback. Visitors over 5′3” tall might touch feet with facing visitors, as the ergonomic scale is meant for families, making adults feel in a kid’s world, and reinvigorating their playfulness. This is supported by the interactive sculpture’s elegant integration of the miniature golf hole. 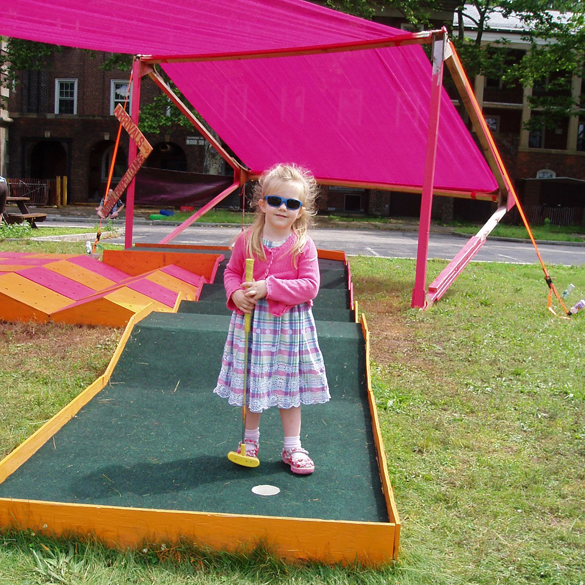 Maneki Neko is a Japanese cat sculpture meant to bring good luck and great fortune. The legend involves a traveler coming across a beckoning cat; intrigued they stray from their intended course. They later come to realize that by taking this detour they have both shortened their journey and averted a disastrous fate. 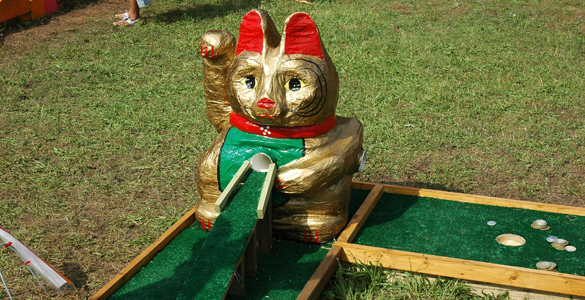 The Venus Flytrap by Boris Ravvin with Friends

Dionaea muscipula, is a carnivorous plant that catches and digests animal prey (mostly insects and arachnids). The trapping structure is formed by the terminal portion of each of the plant’s leaves. The plant’s common name refers to Venus, the Roman goddess of love… Who has promised you that all your dreams will be sweet? 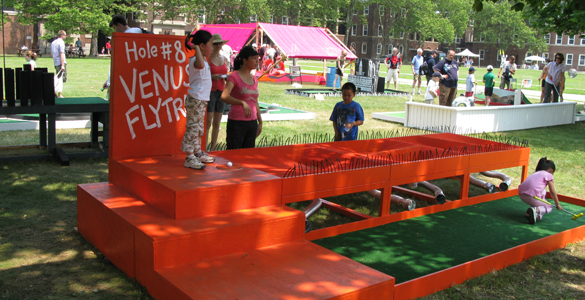 A relic of the once famous Coney Island Astroland gets repurposed for a new life on Governor’s Island. This hole takes the form of an old skeeball machine ravaged by time and in the process of being reclaimed by the earth. Turning the old scoring method on it’s ear, this time players try to score the least they can. The color scheme and imagery is inspired by Asbury Park, New Jersey’s “Tillie” and old photos from Coney Island, New York. 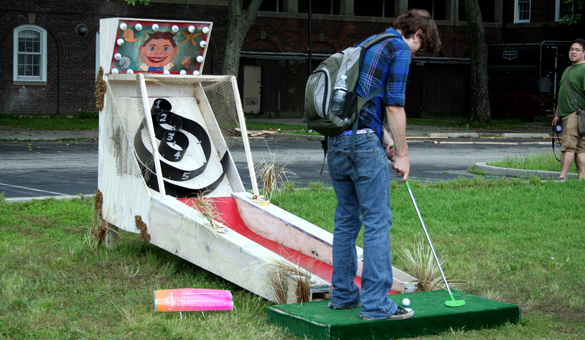 This hole is a meditation on life-long dreams. Often realization of our dreams seems far away or unobtainable. However, through focus and concentrated effort, sometimes realization of those dreams occurs sooner than we expect… 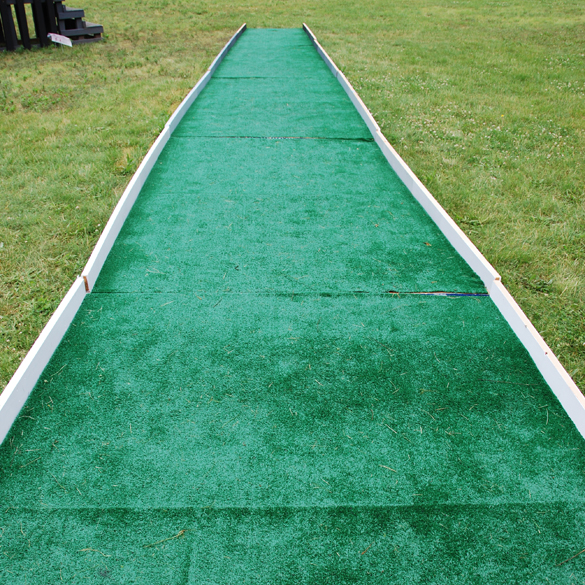 Post Post Apocalypse takes the daring minigolfer through New York City’s worst nightmare – a burned-out and decaying city, long abandoned by its inhabitants… a tombstone to an age of reckless expansion and indifference to the world around it. When one putts down this darkened boulevard, their ball drops off the edge of an abyss…. Will humanity rise from its ashes once again? 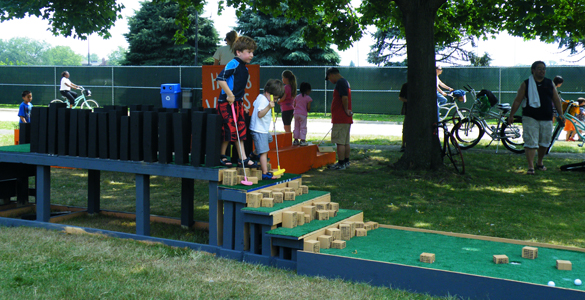 Playnyc depicts an urban playground for both adults and children alike in which the built environment is viewed as a series of experiential public spaces meant for public enjoyment. The ball travels north to south along Broadway from Manhattan to Governor’s Island, along the way rolling, jumping, and bouncing off elements of the city portrayed as playground items. The hole is a representation of ideal public spaces where residents are able to safely play without the hassles of automobiles, restricted access, or obtrusive blockades. 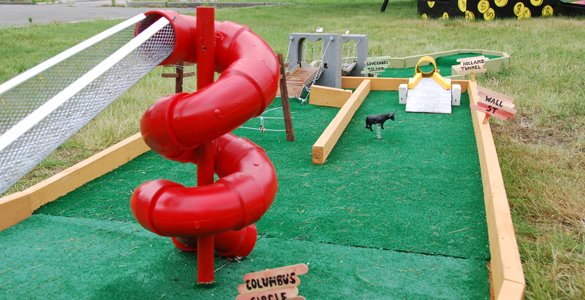 Making It Big by Darren Corona

This piece is about the chances one takes to achieve there dreams. Being persistent is only part of the equation; luck also plays a big part in our lives. Basically, striving for success is great but we all need a little luck sometimes. 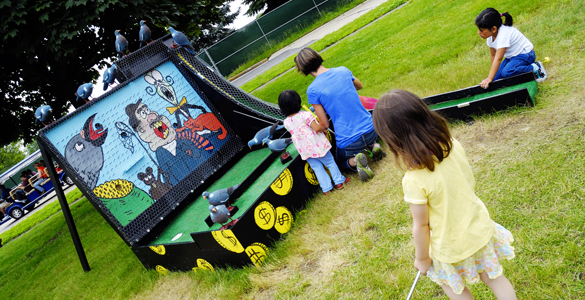 (Hole) Zero was inspired by a pair of Enron golf balls found at a garage sale shortly after the company’s spectacular collapse in 2001. The design is based on the imaginary City of Dreams pictured on Enron’s now defunct stock certificate. 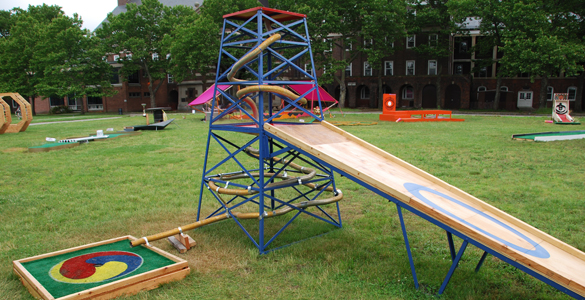 This hole is built out of a dream and the creative reallocation of the materials found around the urban environment. 3R Putt-lantic promotes the idea that there is no need for fancy toys, playthings that may be financially out of reach for many families, to allow an imagination to run free. Hopefully, after playing this hole a few participants will start thinking about alternative applications for the materials they have around them, and coming up with uses that are not only environmentally friendly but provide solutions for their daily challenges. 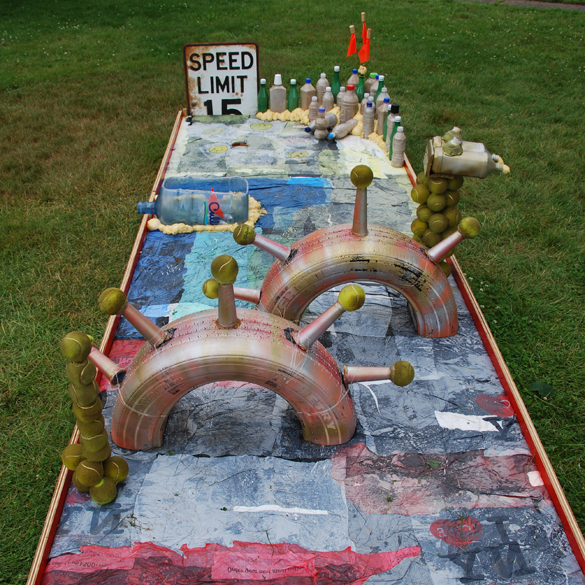 Within our brains is where our dreams are born; where they live and die; where they’re pursued and abandoned, fulfilled and forgotten. Dreams have a life of their own, and the brain is their city and their playground. 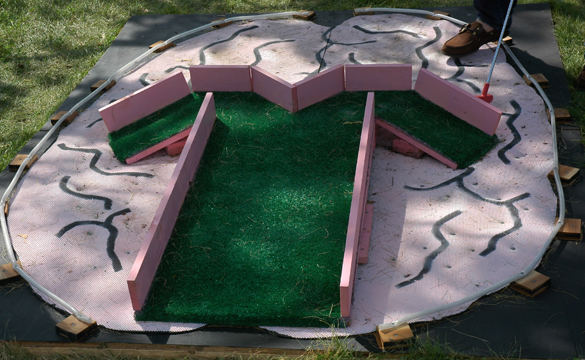 Rollerball is a challenging hole inspired by the Coney Island Cyclone. Players aim their ball up a ramp, which splits at the top to send it either directly into the hole or circling back to the beginning. The piece follows the Cyclone’s basic lines and structure, and is decoupaged with pictures of historic Coney Island. 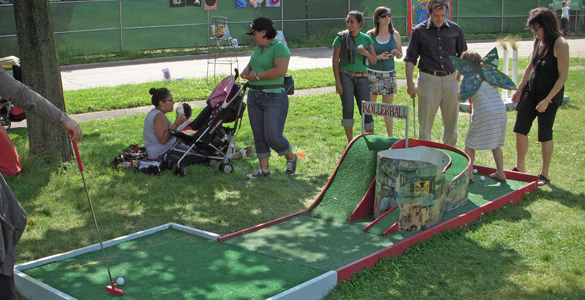 plastiCITY of density by Uriel Ortega

Density gave birth to the essence of Manhattan. Verticality, order, non-memory, non-permanence and anonymity are some of the elements that have helped sustain this Manhattanism. The “plastiCITY of density” elevates the story of Manhattan as an everlasting symbol of modern anxiety, a city eternally in transition that co-exists with the recent Past (Ground Zero), thrives in a Present (density in flux) and yearns for a more organic Future (modern-age Gardens of Babylon).

Many thanks to Stefano DiCicco, Kimberly Ahad, Joan Gauthier and Stephen Touhey. 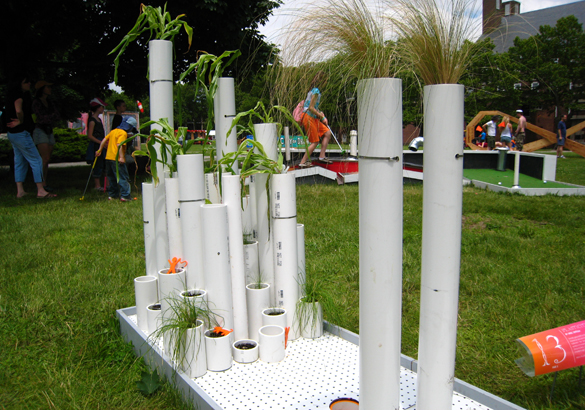 Putter on the Roof by Jason Austin and Aleksandr Mergold; Rebuilt by Eli Kent

Ascend and play atop City of Dreams’ patchwork rooftops. Just watch out for the gutter. 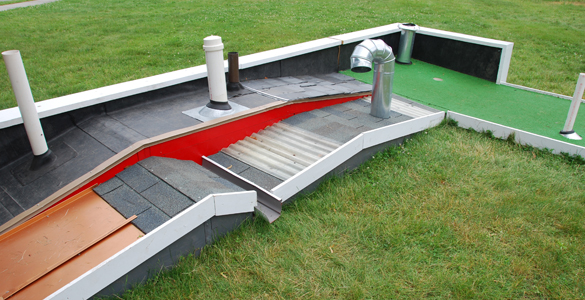 This project illustrates how roadways are an integral part of city life whether they cater to vehicles or pedestrians. In this project roads will be represented by a series of contour cuts along a compound curved surface. Rather than smoothing out the contours, each connection will be stepped in order to further illustrate references to roadways while also increasing the difficulty of the hole. In its current configuration there will be two main ways to navigate the hole. The direct route will offer greater danger since it is narrower, has two rough patches and contains more turbulent terrain. The long route is shallower, but might require more strokes. Overall the experience is supposed to illustrate how linear systems can work in complex ways. 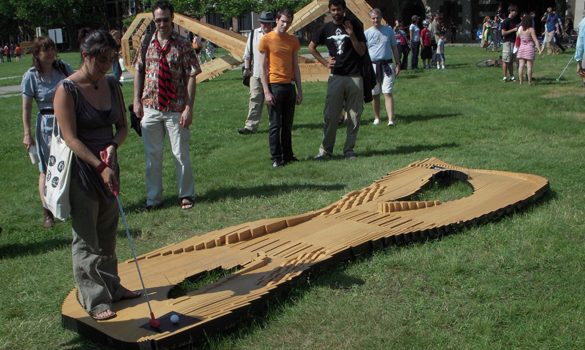 Putt In & Rock Out by Rebecca Seward and Dov Torbin

Putt In & Rock Out’s design reflects the iconic style of the electric guitar. Players must choose one of six “guitar strings” to putt their ball into; much like the difficult path to achieving rock stardom, players must choose their string wisely in order to keep a low par.Use of the Power Stance is greatly encouraged. 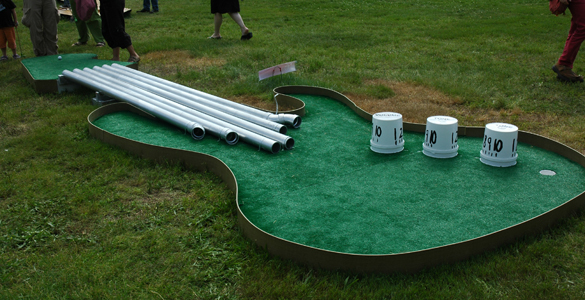 Hole in One! By Chris Shelley

In these anxious times, what we need is just a few moments of victory and the assurance that we are capable of greatness. Take a second to line up your shot, swing the club, and sink that ball. Now, raise your arms high, and let everyone know that you are the master of this course. In the big leagues, we call that an Eagle, and you just nailed it Mr. Woods. 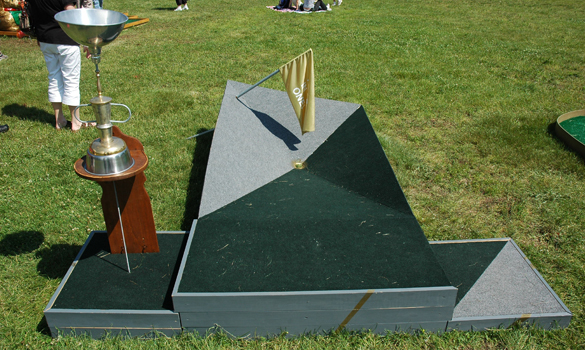 Labyrinth of Failure by Chris Hackett and Eleanor Lovinsky

As in life, pitfalls lie on the one true path to your dreams. These “Fail Holes” each represent a different flavor of failure- like: Fail: Someone younger and cuter got the promotion; or Fail: You are just not good enough. Move to Portland. The ball falling into a fail hole rolls through a system of pipes back to the origin, each failure counts as a stroke. Successfully navigating the maze causes the ball to roll into the Pipe of Winning and the player wins. 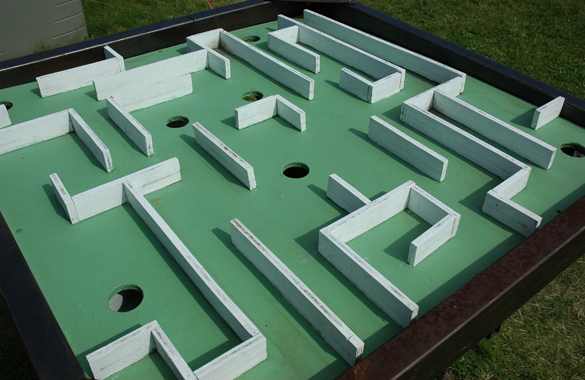