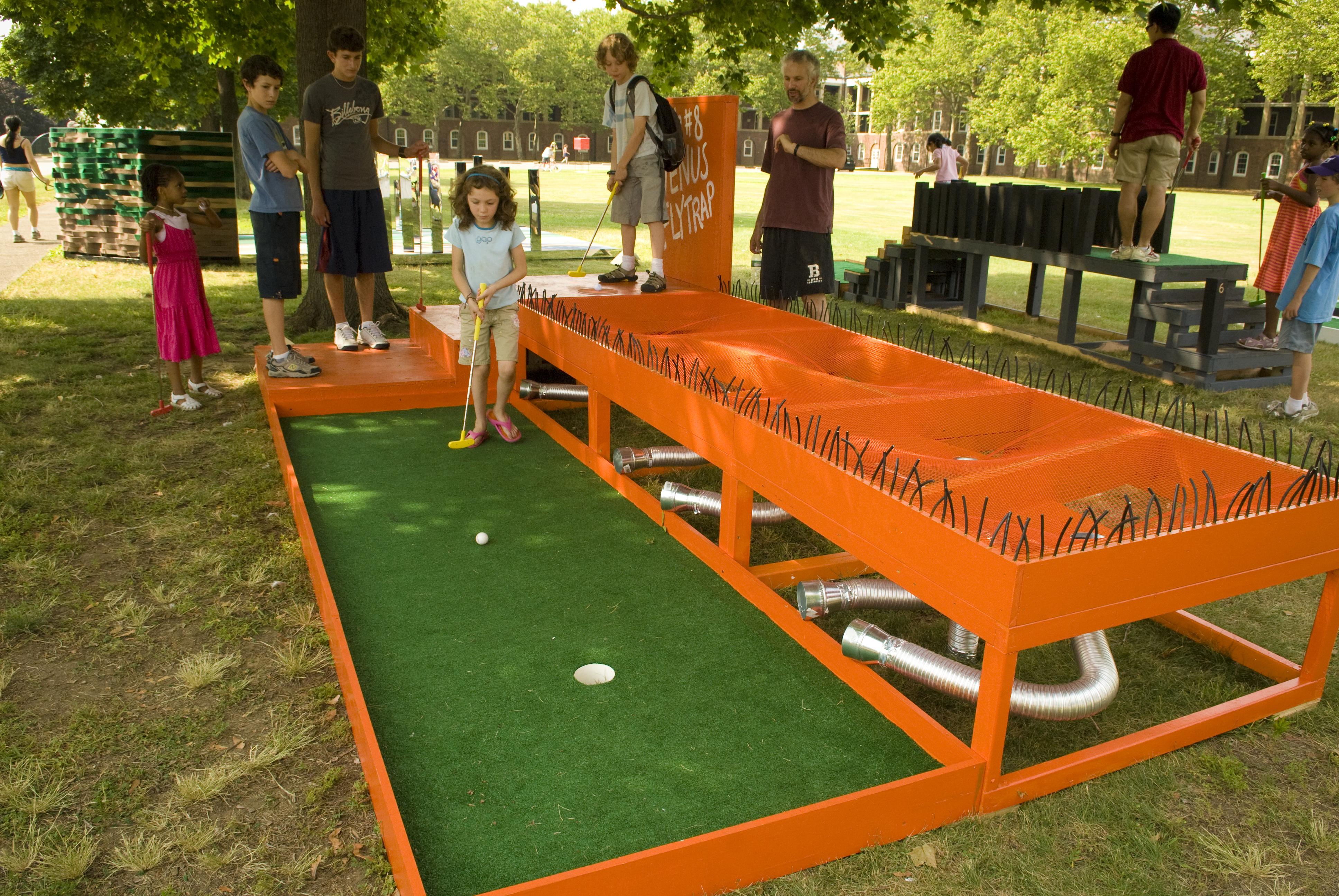 City of Dreams Mini-Golf is a nine-hole mini golf course located on Governors Island – FREE and open to the public Fridays through Sunday until October 12, 2008.

Nine different artists (or groups of artists) each designed and built one hole of the City of Dreams Mini-Golf. The project is an example of artists working separately, yet together creating a collaborative work of playable, interactive public art.

City of Dreams Mini-Golf is a project of FIGMENT, an annual celebration of participatory arts that takes place on Governors Island. FIGMENT is a free, non-profit, volunteer-planned public participatory art event.

City of Dreams greatly appreciates the support of Black Rock Arts Foundation, whose mission is to fund interactive and participatory art. And of course, City of Dreams would be nothing more than a dream without the support of Governors Island, which has hosted FIGMENT since its inception.

We invite people of all ages to play through the dreams of nine different artists, expressed through the medium of mini golf:

1. Astral Carpet Lounge by Disorient with special thanks to Studio Uma
Lounge in Disorient’s Zero Gravity Chairs under a pink delta shade while waiting for take-off to City of Dreams.

2. Gotham City Superheroes by Jen Upchurch
Hit the ball through the City of Dreams’ tallest building, decorated with paintings of the City’s own dreamy superheroes.

3. Rollerball by Benjamin Jones and Anna Hecker
Ride City of Dreams’ very own rollercoaster. Will your ball go towards the hole, or get sent right back you the tee?

4. Putter on the Roof by Jason Austin and Aleksandr Mergold
Ascend and play atop City of Dreams’ patchwork rooftops. Just watch out for the gutter.

5. Path of Life by Zeke
The City of Dreams has its own currency. Can you find the best way to reach your goal?

6. Post Post Apocalypse by Brian Bucher
Putt through an avenue of burned-out buildings to reach the idyllic village below.

8. The Venus Flytrap by Boris Ravvin with Larry Romanelli, Joe Fiero, Vlad Koyfman, Mikiko Kitani, Rick Jorgensen, Boris Lyubchik, Sofia Ravvin, and Dana Ravvin
The City of Dreams’ very own flora is the orange Venus flytrap. Watch as it eats up your ball then spits it out onto the putting green.