FIGMENT, the Emerging New York Architects Committee (ENYA) of the American Institute of Architects New York Chapter (AIANY), and the Structural Engineers Association of New York (SEAoNY) are excited to announce the winning design in the seventh annual City of Dream Pavilion Competition: Oculi by Austin + Mergold in collaboration with Maria Park (Cornell) and consulting engineers Chris Earls (Cornell) and Scott Hughes (Sillman). Pending approvals and fundraising, this temporary art structure will be assembled on Governors Island and open to the public for the summer 2018 season on Governors Island.
The winning design team will construct an architectural pavilion out of up cycled metal grain bins, connecting Upstate and Downstate. The City of Dreams Pavilion, so named for its focus on the future of a world that faces strains on both economic and natural resources, aims to promote sustainability-oriented thinking amidst the architecture and design communities, requiring designers to consider the environmental impact of their designs from materials sourcing to disposal (or ideally reuse) of waste a the end of the season. 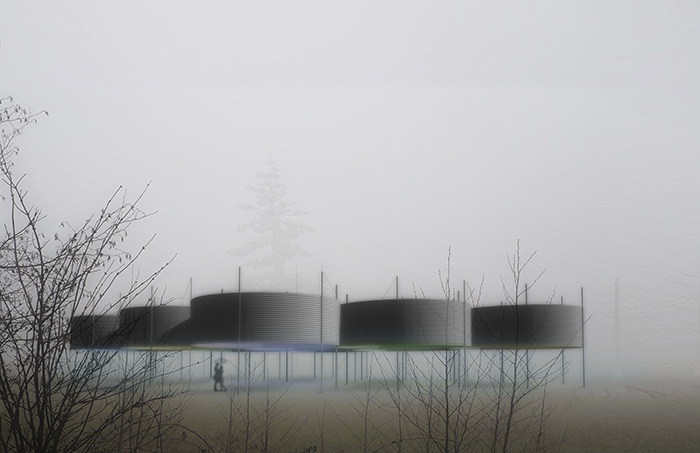 The winning proposal will reuse old metal grain bins (silos), vestiges of the American agro-industrial age, in ways not unlike how medieval inhabitants of Rome reoccupied the remains of the Ancient Empire–with a bizarre combination of pragmatism and poetry. The grain bin is our contemporary spolia, and as such can be both useful and fanciful.

The bins, which dot the fields of upstate New York, will be brought to the City, establishing a visual connection between urban and rural modes of living. Out of the bins, a field of elevated oculi will be constructed to frame unobstructed views of the sky and track the path of the sun, producing a range of shadow patterns below augmented by color and sound. These elevated rooms, with their interior walls painted a particular color of the daytime sky, will invite viewers to negotiate their path below the structures. Eventually, viewers will look up and the color of the walls of the silo will match the color of the sky at the moment of the viewing.

Following the de-installation of Oculi, the bins will be reconstructed as an experimental housing cluster in Central New York. There, an interior view into the bin will occasionally reveal a color of a New York City summer sky.

The team will work with FIGMENT, ENYA, SEAoNY, and Governors Island to select the exact site for Oculi, refine the design, obtain necessary approvals, and fabricate and install the pavilion on the island.

FIGMENT is accepting tax-deductible donations to support the fabrication, installation, and maintenance of the pavilion on Governors Island for the 2018 summer season. Donations can be made by following the link here: http://www.figmentproject.org/donate. The project will likely also be launching its own funding campaign.

Austin+Mergold (A+M) is an architecture, landscape and design practice founded by Aleksandr Mergold, AIA and Jason Austin. A+M see their work process as slow architecture. Believing that it is preferable to rethink and repurpose existing resources than to tap new ones, A+M infiltrate existing systems that are responsible for built form, rather than reinvent the wheel each time. A+M explore local vernacular conditions to discover how an efficient (and economical) reconfiguration of available materials, forms and methods, informed by the latest advances in technology, can result in an improved quality of life for communities and individuals. A+M thrive on solving design problems around time and budget constraints, using common (often, unglamorous) materials and utilizing the long-established local methodologies in new ways. A+M’s work has been featured in Hong-Kong Shenzhen Biennale, Ljubljana Design Biennial and Cornell Council for the Arts Biennial; the work has also been published in a variety of media, including Architectural Record, Thresholds, Domus, Mnemeio & Perivallon, 306090, BLDGBLOG, Specialle-Z, The Architect’s Newspaper, The New York Times, The Philadelphia Inquirer, Residential Architect Magazine, and The Cornell Journal of Architecture. A+M are winners of 2010 New York Architecture League Prize for Architects and Designers, the 2012 Philadelphia AIA Emergent Architect Prize, 2014 Folly Competition at Socrates Sculpture Park, and are recipients of the 2015 New York State Council on the Arts (NYSCA), 2016 Cornell Council for the Arts grants (Mergold), and 2017 Urban Edge Prize (Mergold) from University of Wisconsin-Milwaukee. Aleksandr Mergold is an Assistant Professor of Architecture at Cornell University. Jason Austin was recently an Assistant Teaching Professor at Drexel University’s Westphal College of Media, Art and Design and is currently teaching at Academy of Art University in San Francisco.

Maria Park is an Associate Professor and Director of AAP Exhibitions and Events in the College of Art, Architecture, and Planning at Cornell University. Maria Park's work examines ways that technology intervenes in our participation in the world. Ranging from serially based paintings to site-specific installations combining studio-produced and manufactured objects, her work explores human presence and agency within a media-reliant society. Since graduating with an MFA in Painting from the San Francisco Art Institute in 2003, Park’s works have been included in numerous exhibitions both nationally and internationally. Museum projects include solo exhibitions at The Kemper Museum of Contemporary Art in Kansas City, MO and the Museum of Contemporary Art in Santa Rosa, CA, and group exhibitions at the Johnson Museum of Art in Ithaca, NY, the Contemporary Art Museum in St. Louis, MO, and the Seoul National Museum of Art in Seoul, South Korea. Park was commissioned a permanent installation for the new building at Johns Hopkins Hospital in Baltimore, MD (2012) and has recently completed the design of a 150-foot mural for the central subway temporary barricade at the Chinatown Station in San Francisco, CA, commissioned through the San Francisco Arts Commission in partnership with San Francisco Municipal Transportation Agency. Awards include the MFA Grant Award from the Joan Mitchell Foundation (2003) the Korea Arts Foundation of America Award (2002), and the Murphy Fine Arts Fellowship from the San Francisco Foundation. Her work is represented by Margaret Thatcher Projects in New York City and Nancy Toomey Fine Art in San Francisco, CA.

Chris Earls is a professor at the Department of Civil and Environmental Engineering at Cornell University. Earls' research involves the development and application of new computational techniques for the study of important problems involving solids and structures, as well as other natural and engineered systems. Coupling the principled treatment of uncertainty with these computational approaches facilitates the solution of complex inverse problems. Such inverse problems arise naturally as part of Earls' research. Earls is a member of the United States Association for Computational Mechanics (USACM), the International Association on Computational Mechanics (IACM), and the Society for Industrial and Applied Mathematics (SIAM).

Scott Hughes is a principal at Silman Structural Engineers. Hughes has been with Silman since 1997. He was named an associate with the firm in 2003 and a principal in 2012. His experience in design and project management in new construction and adaptive re-use projects encompasses a wide range of projects. These include museums, higher education buildings, and waterfront structures, such as the Whitehall Ferry Terminal and Marine Company 1 in New York City, as well as multi-family residential projects, recreational facilities, and single-family residential projects, among them the occasional townhouse renovation. Hughes has also worked as an Adjunct Assistant Professor at Columbia University Graduate School of Architecture, Planning, and Preservation where he taught architectural technology in an informal “integrated studio” to graduate students, as well as at Parsons The New School for Design School of Constructed Environments where he taught structures to graduate students in architecture through real-world case studies. He currently teaches at the Cornell University College of Architecture, Art, and Planning. Hughes is an active member of industry organizations, and served as the President of the Structural Engineers Association of New York (SEAoNY) from 2013-2014. From 2009-2011 he was a Grant Review Panelist for the New York State Council on the Arts.