The 2016 Minigolf course is now closed for the season, thank you to all of our artists, volunteers, and visitors!

Over the past 8 summers, FIGMENT has created a free, artist-designed Minigolf Course on Governors Island in New York City. This course, one of a number of summer-long programs created by FIGMENT in addition to its weekend-long FIGMENT NYC event, has received a substantial amount of critical acclaim and media attention, and has delighted hundreds of thousands of visitors of all ages.

FIGMENT's theme for the 2016 Minigolf Course is 'Mini is the New Big.' Since Minigolf course designers normally shrink common structures such as windmills, buildings, bridges, etc, with this year's FIGMENT Minigolf theme we asked artists to do the opposite: to create BIG versions of small objects to celebrate form over commentary.

The 2016 FIGMENT Minigolf Course is made possible with the support of The Friends of Governors Island.

Help us maintain the course over the summer by making a donation to FIGMENT today. 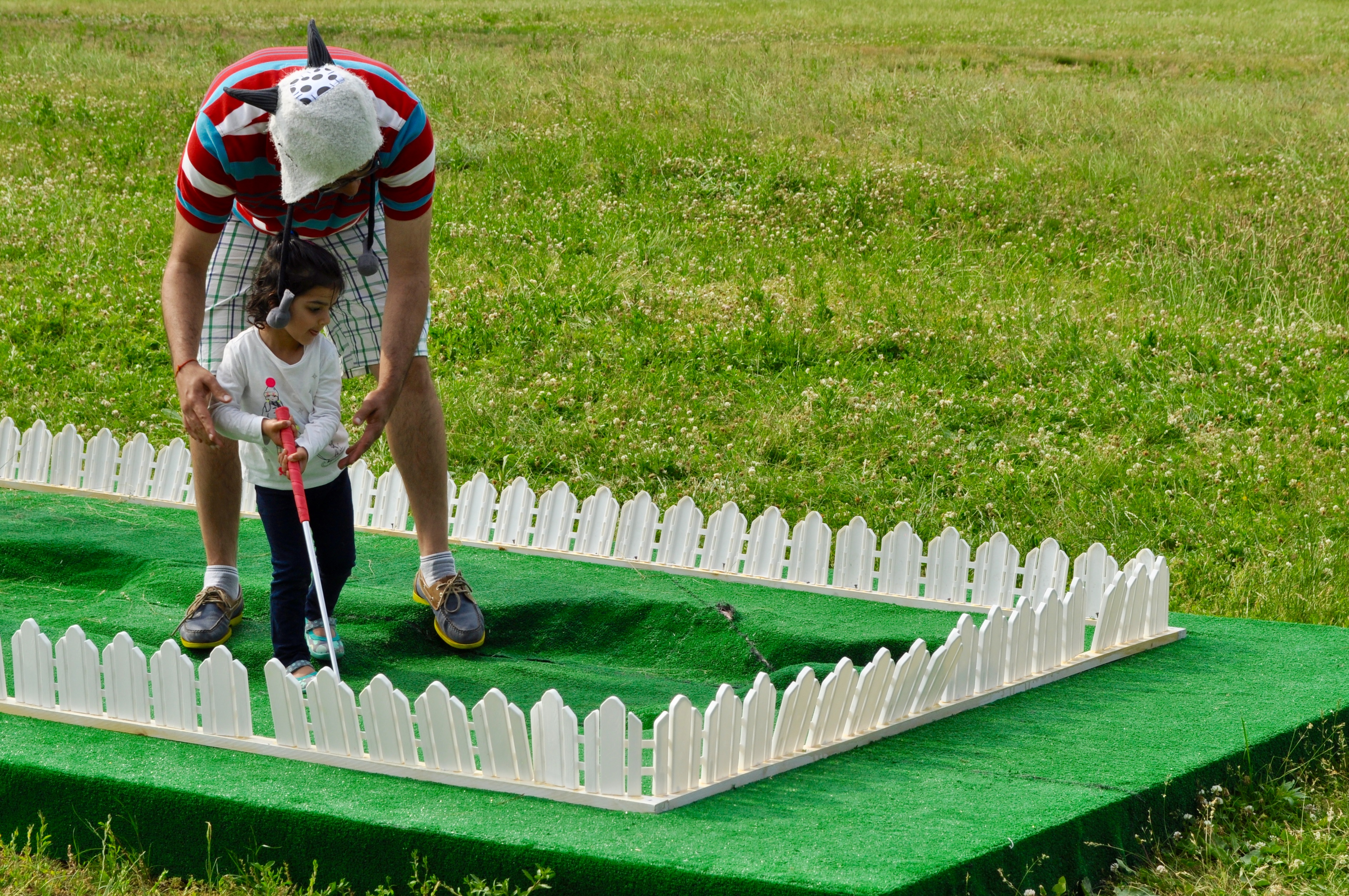 Everywhere we go, we leave things behind us—crumbs and bottle caps on the kitchen table, broken twigs along an abandoned path in the woods, Neil Armstrong’s footprint on the surface of the moon. Our footprints tell incredible stories. Carbon footprints, dinosaur footprints, paw- and hoof-prints from game, and human footprints on the beach. As you explore the hills and valleys of the big foot print, consider the marks you have made on your own environment, and what they say about you. 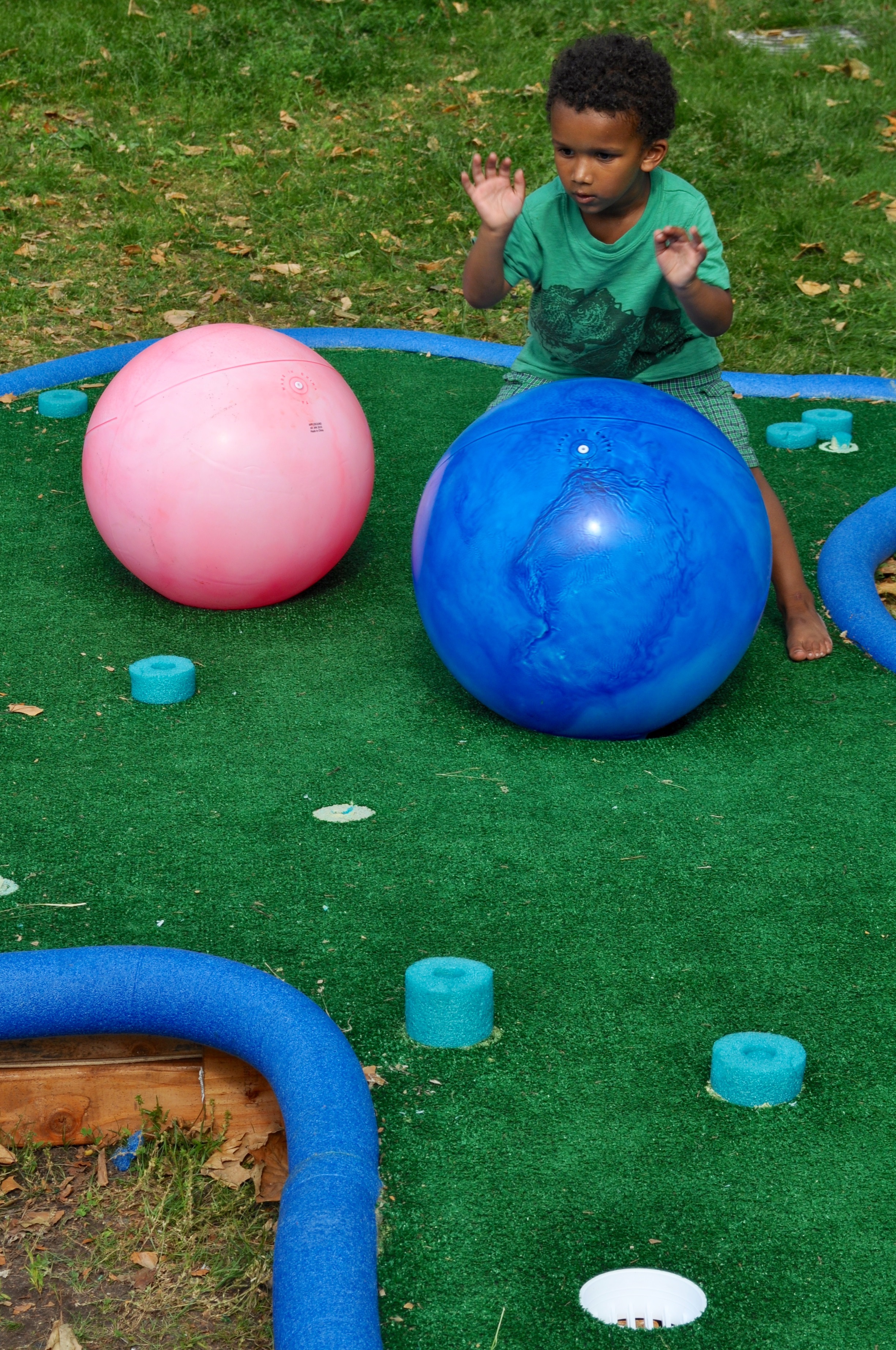 Under a microscope, one finds within an amoeba's cell structure a wonderfully varied set of organelles that regulate its basic life functions. Super-sized, these organelles are a perfect constellation of obstacles for a minigolf hole. An amoeba's cell membrane extends and contracts to form pseudopods, or false feet; these aid the amoeba in movement and eating, wrapping themselves around scavenged food particles which then get absorbed into the endoplasm and later digested. In this hole, pseudopods’ fluid shapes create tricky angles and ricochet opportunities when they digest the golf balls, requiring creative shot selection by the golfer. The nucleus, food vacuoles, water vacuoles, and contractile vacuoles float freely, forming an undulating putting landscape. This educational narrative within the cellular landscape provides a fun and challenging layout for beginners and skilled players alike. 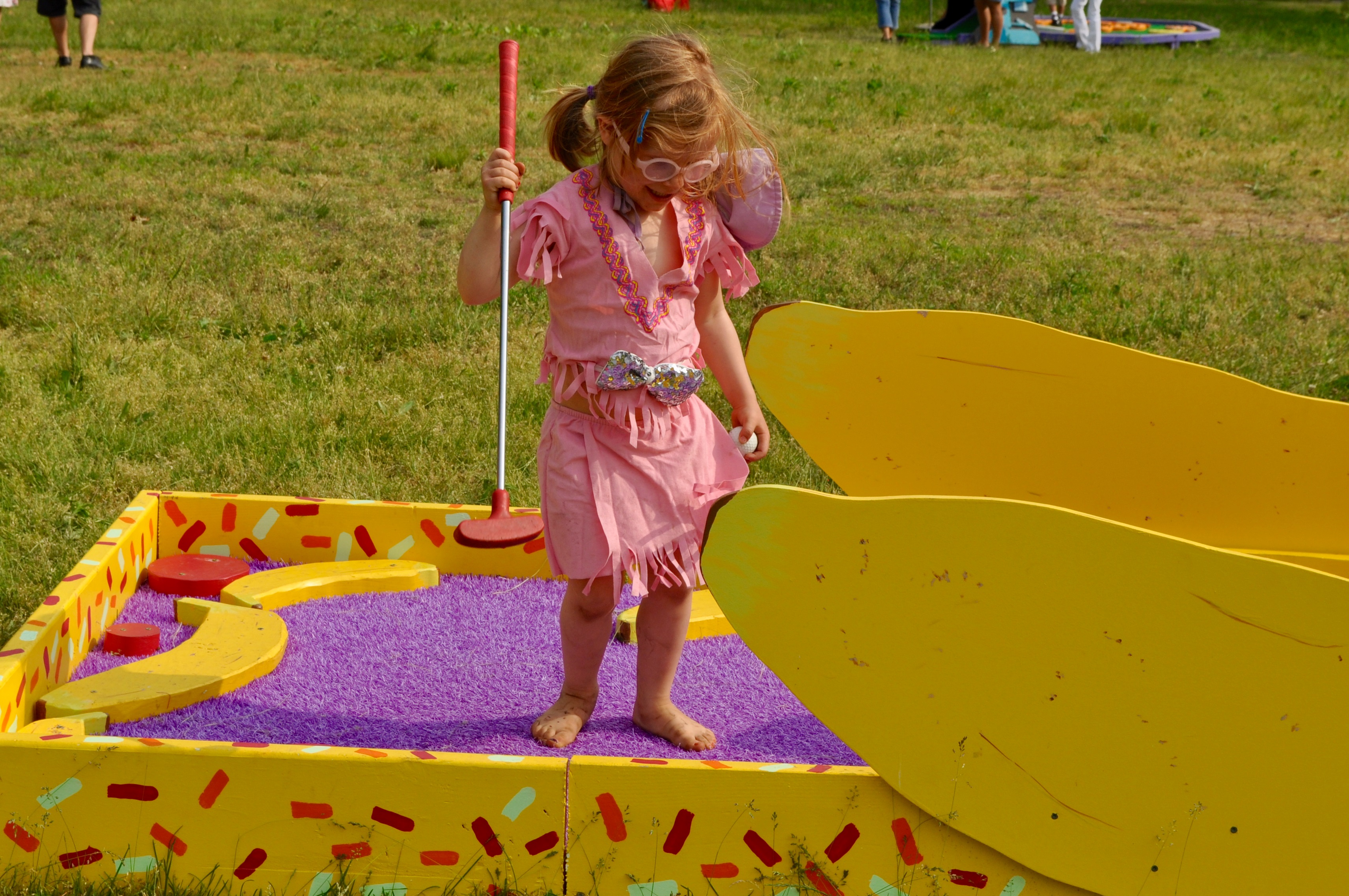 This minigolf hole has totally gone bananas. Inspired by the banana split dessert there are bananas everywhere, including a pair lining the hole that are about 20 times normal size. Behind the hole is a tower of ice cream scoops piled 8 feet high and topped with a cherry. Dig in! 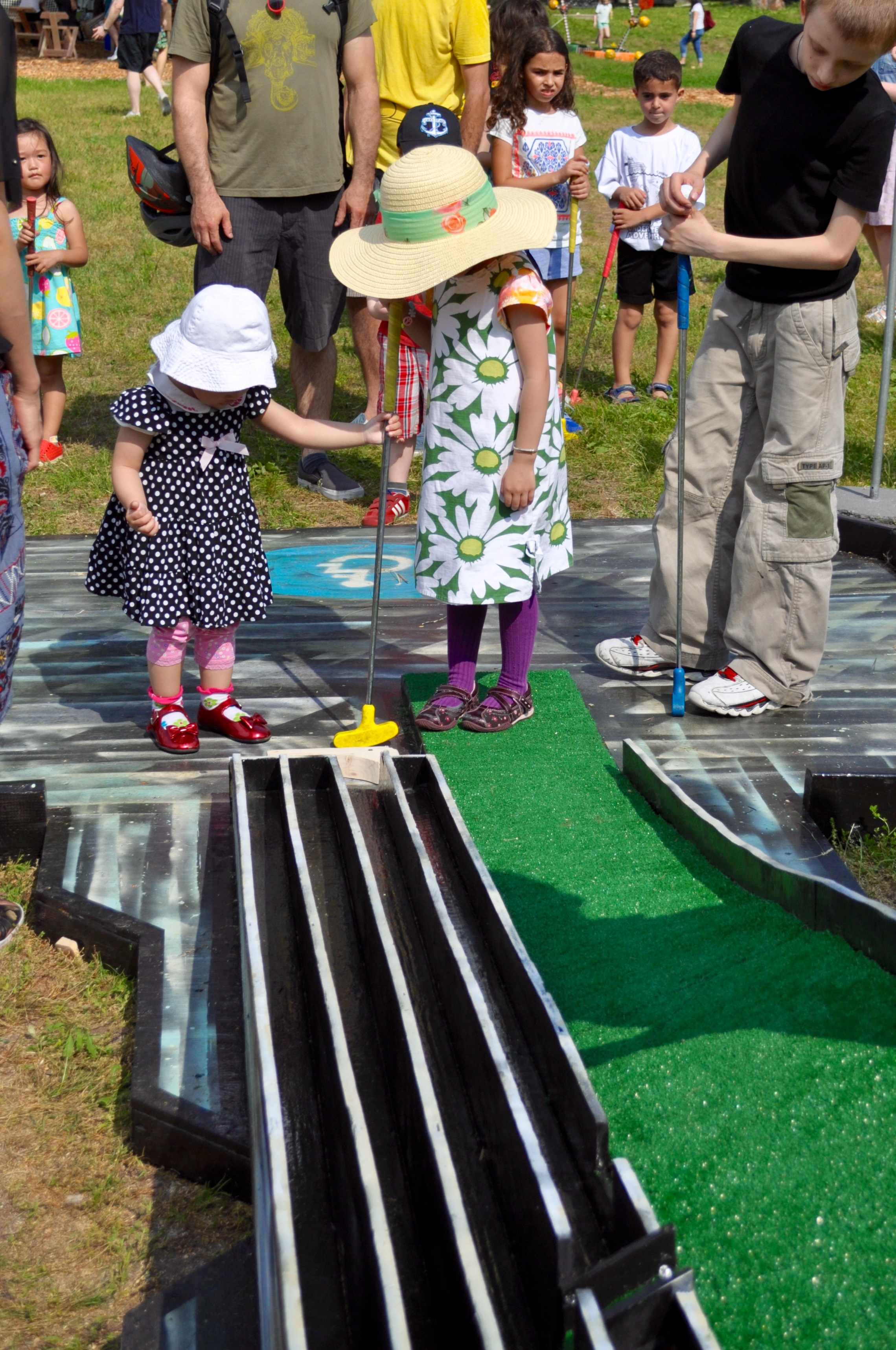 Sometimes it takes only a small gesture to change a hard situation into an easier one. A simple gesture of generosity can improve someone else's life greatly. If that one generous person becomes many, even more amazing things can happen to help make a better world for many, many others. Volunteering can be infectious and addicting, providing a feeling of unparalleled joy as you spread happiness to others who really appreciate its impact. Sometimes, if we try hard enough, volunteering can help transform a small moment into a great event; much like FIGMENT over the years as it went from a single day in a single city in 2007, to spanning many days in a dozen cities in 2016. To altruistically offer oneself, one has the key to the world: opening doors, opening arms, and opening hearts. 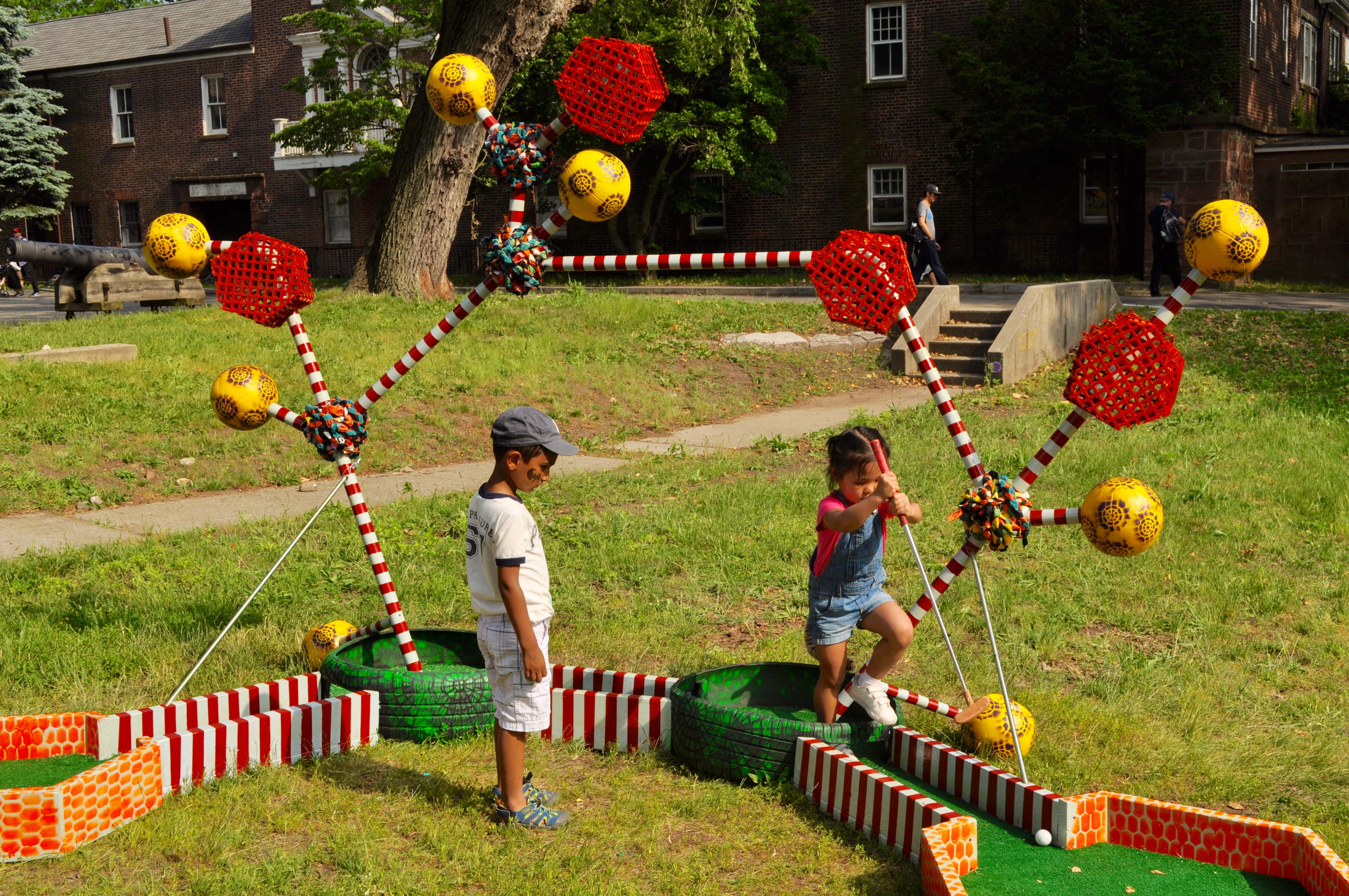 When asked to think small, we got down to the molecular level. We chose a glucose molecule because glucose is essential in the lives of animals and plants. Glucose is how energy is stored and transferred in biological systems. During photosynthesis, plants harness the sun's energy, storing it as glucose. Animals must eat glucose in the form of carbohydrates to use for energy in their cells. In our model, the lines representing the chemical bonds become channels for the balls to travel along, and the shapes that represent the atoms are visually interesting from a distance and textural, using a variety of re­purposed materials. A molecule represents something greater: organisms, and chemical processes. Playing Molecular Golf at FIGMENT leads to conversation about biology and the larger meaning of small things. 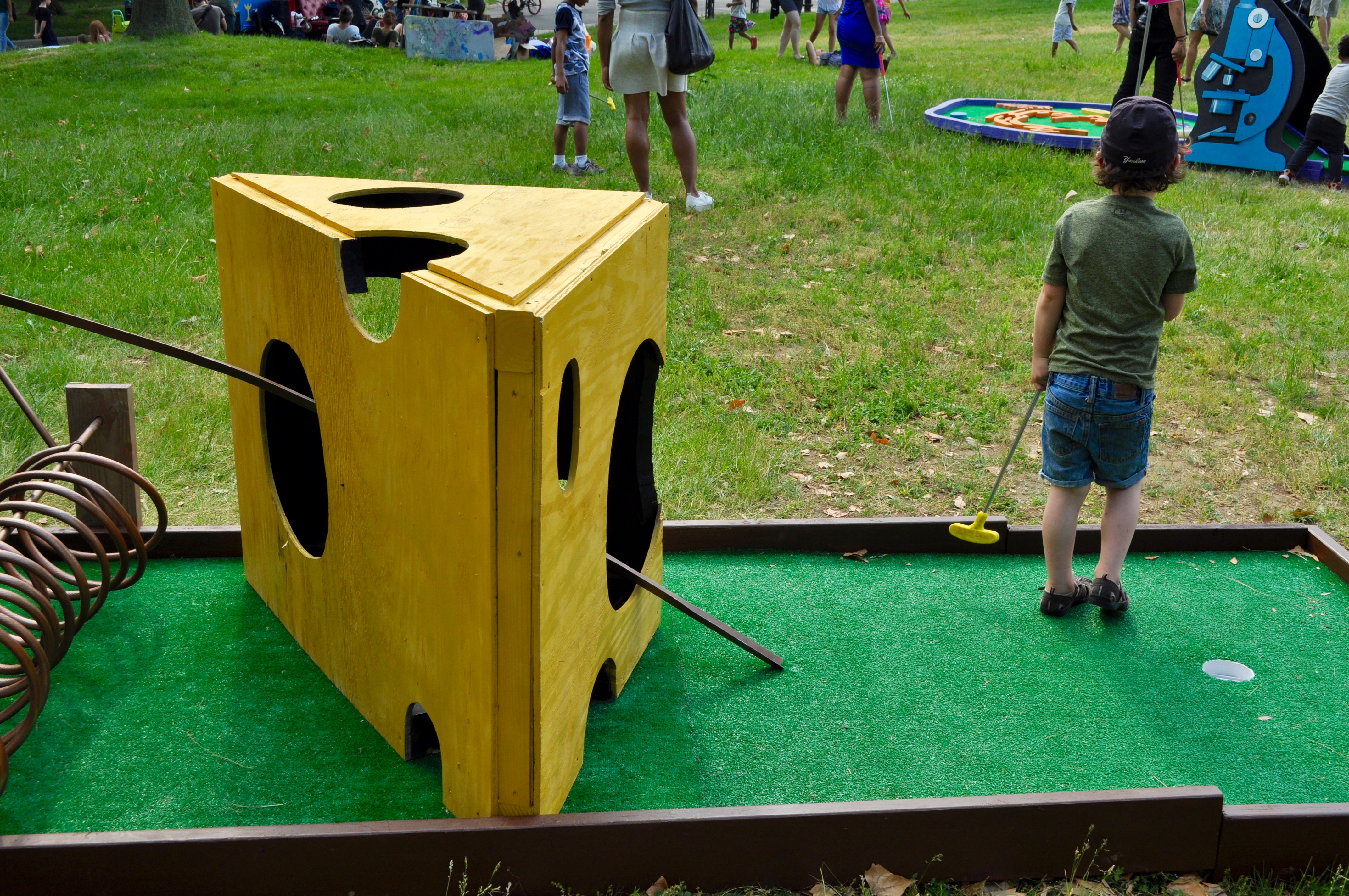 This miniature golf hole uses the conventional mousetrap enlarged as a foundation for this year's theme. Components of the hole include various ramps, trough-ways and a big chunk of cheese as an obstacle for route to the hole. Participants can attempt to make a hole-in-one by hitting golf ball up the middle ramp into top center hole of start, and/or side holes to get better second shot advantage to get to hole. If the holes are missed, ball continues into a trough that bends around the wall to give an angled shot to cube cheese ramp obstacle. Once through the cheese the hole is a straight shot! 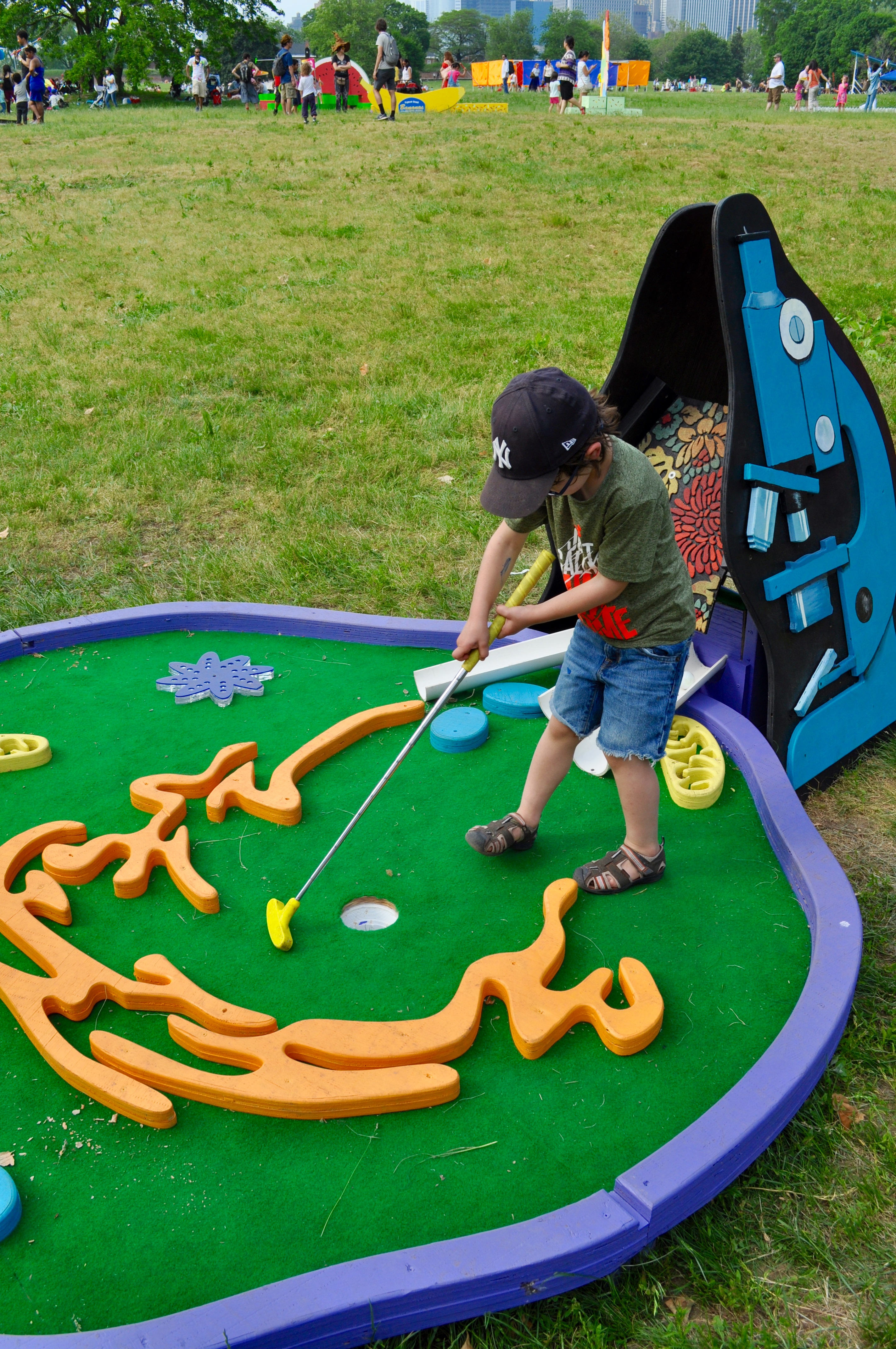 We decided to enlarge something tiny that's near and dear to all our hearts... well, actually it makes up our hearts: the human cell. To get to the cell, you hit the ball up a ramp in a microscope and through one of three mystery doors. 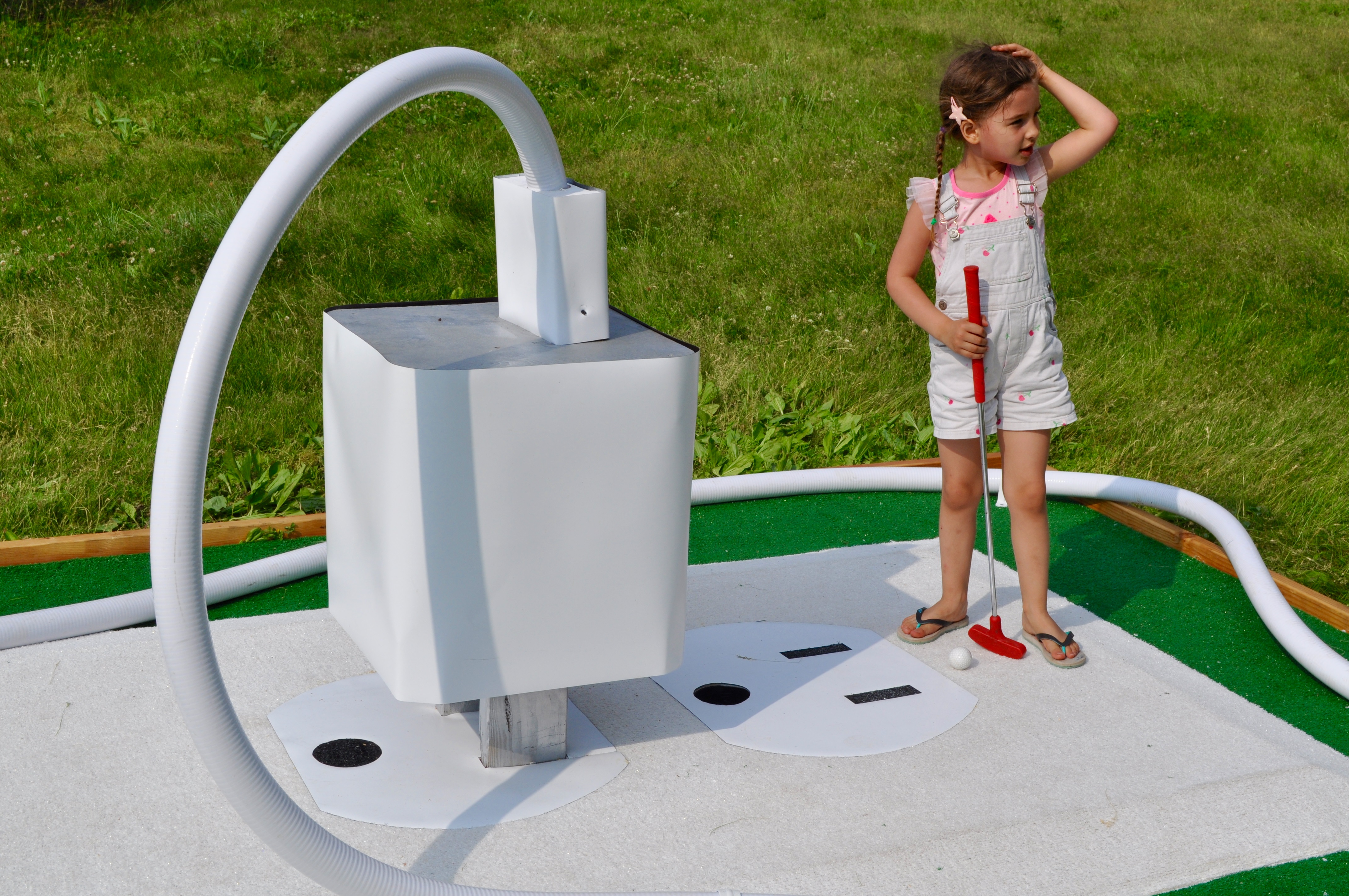 According to a study conducted by the New York City Department of Consumer Affairs last November, 96% of New York City residents own mobile phones. That amounts to about 8 million people in a city of 8.5 million. These devices have become a household staple. They are omnipresent objects in our lives, constantly referenced and relied upon... and always in need of a charge.

What phone can exist without its lifeline, the charger, and its power source, the outlet? They are ignored and even forgotten, until your battery hits 20% and that low-battery anxiety starts to creep in. They are the essential, behind-the-scenes players in our lives. It is time we celebrate these everyday objects and give them the recognition and attention they deserve. 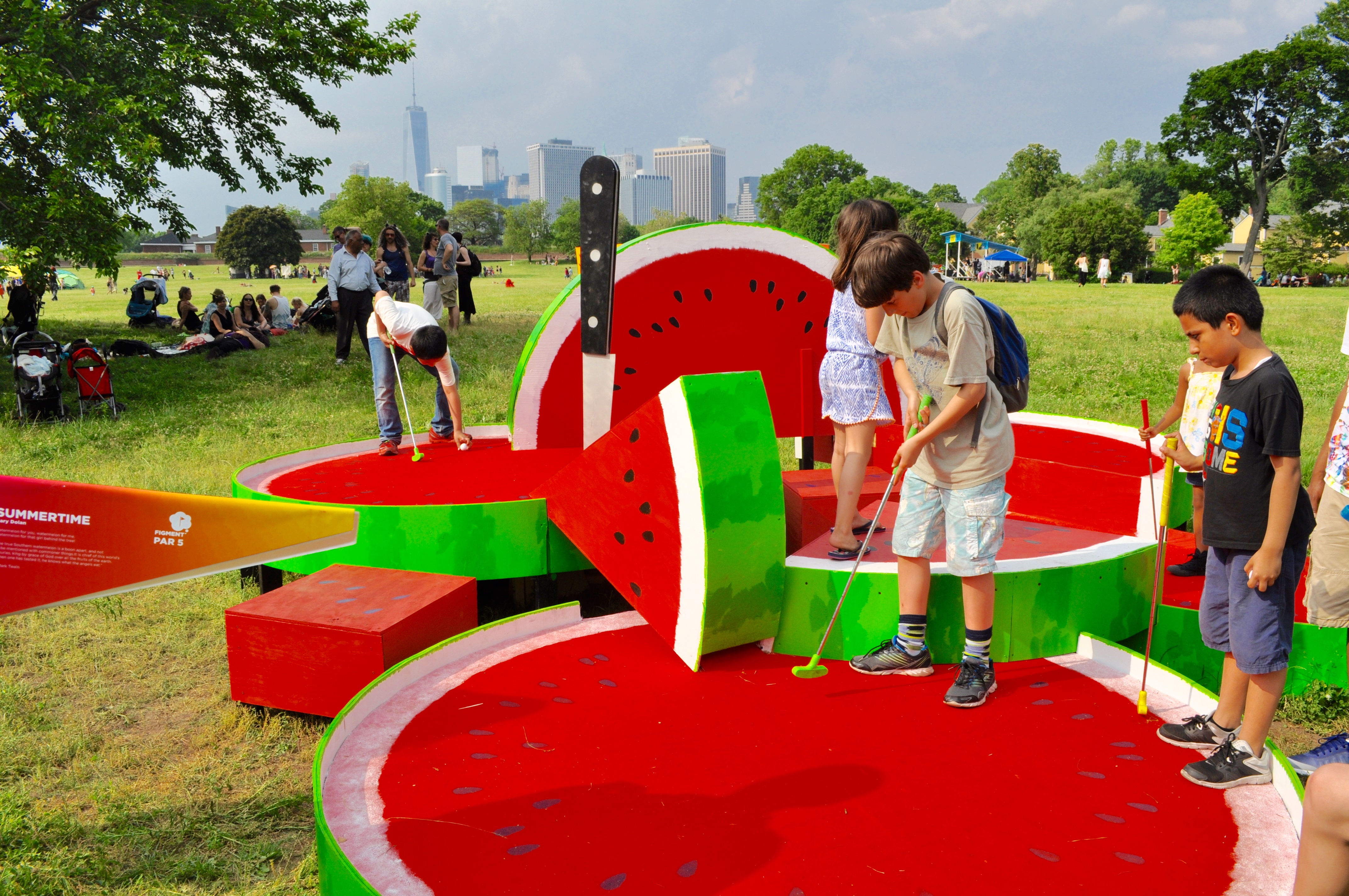 Watermelon for you, watermelon for me, watermelon for that girl behind the tree! "The true Southern watermelon is a boon apart, and not to be mentioned with commoner things.  It is chief of this world's luxuries, king by grace of God over all the fruits of the earth. When one has tasted it, he knows what the angels eat." – Mark Twain 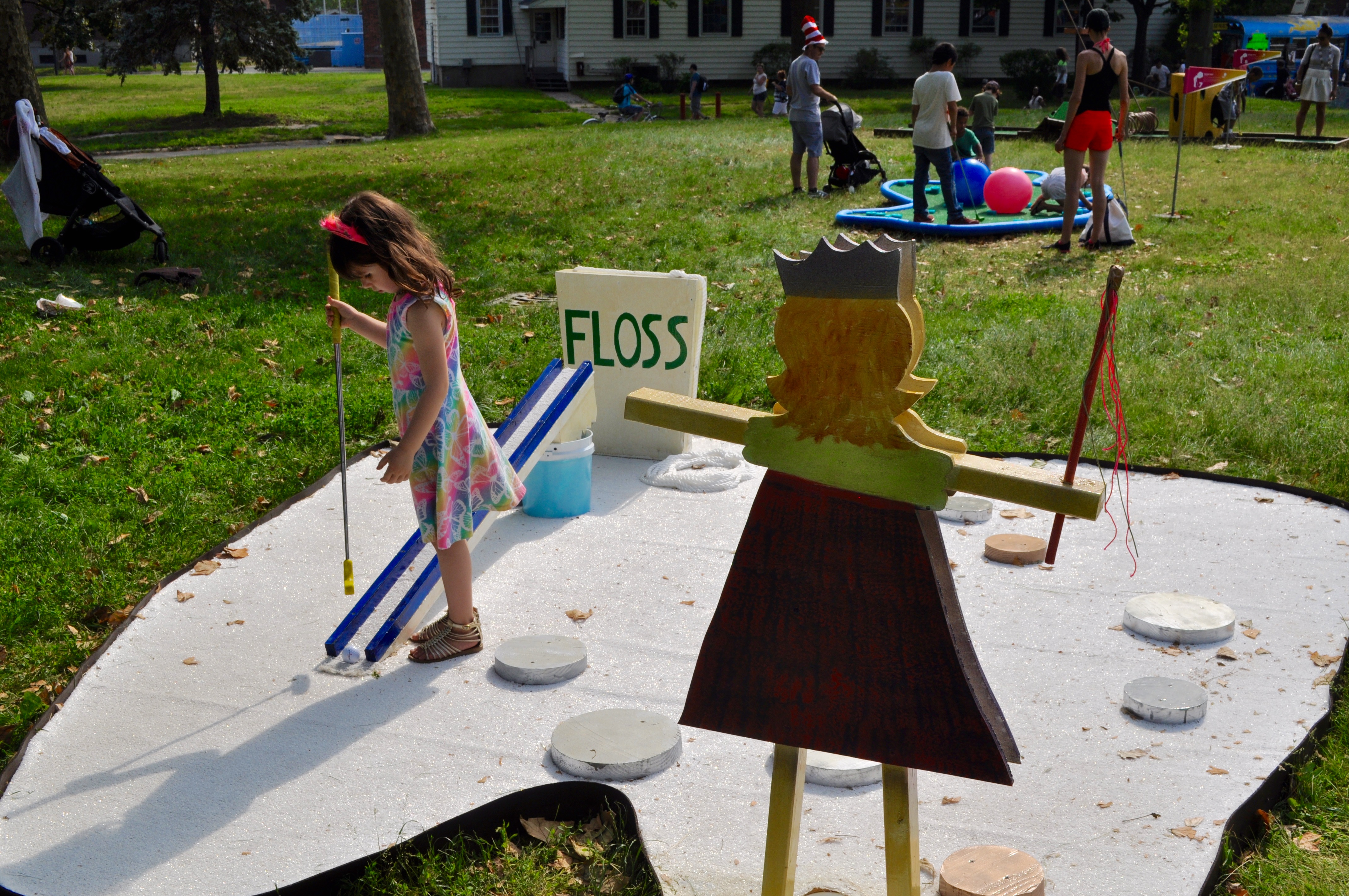 A couple wiggles here, a drop of blood there, a wince of pain here and there, and before you know it your child has lost the first tooth! This hallmark moment of early childhood is celebrated by some families by the child excitedly placing the lost tooth under her pillow at night, with the anticipation of the tooth fairy appearing during her slumber to exchange the tooth for a trinket, a toothbrush, or a small monetary token.  This par 3 course is designed for players to putt around a giant tooth decorated with shiny coins and a toothbrush to arrive at the tooth fairy and share their stories of how a tiny tooth creates a momentous occasion. 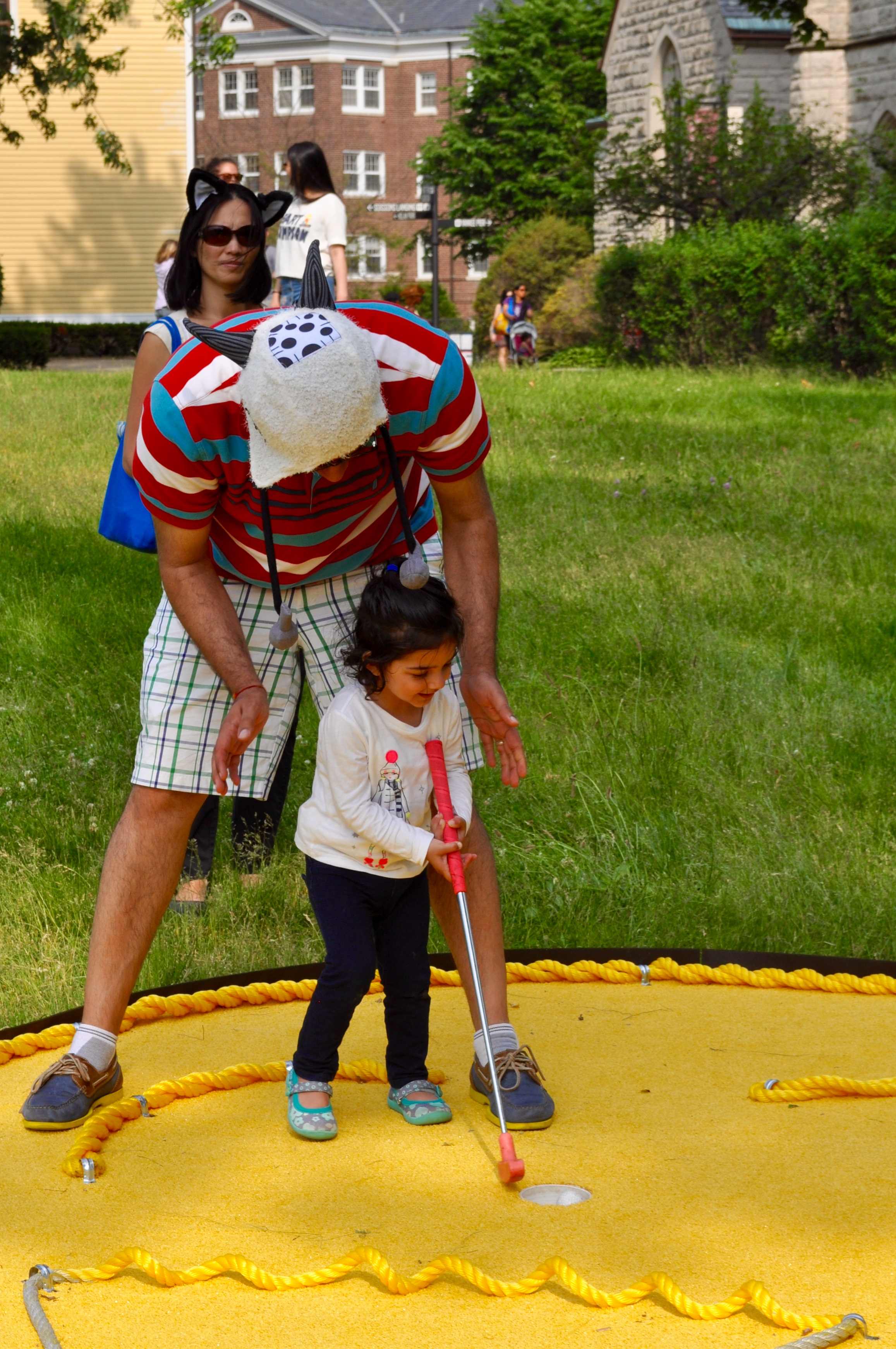 This par 3 mini-golf hole honors the ingenious work of Thomas Alva Edison and the scientists before him who contributed to the evolution of light after dark. The incandescent light bulb is a mini device that has spawned a big worldwide impact. As LED bulbs, a more energy efficient method for lighting our nights, have become the bulb of choice, the incandescent light fixture is fading from our homes and offices. Before we forget the shape of the elegant incandescent bulb, let us take aim for a hole in one.

Help us maintain the course over the summer by making a donation to FIGMENT today.